Will his proposal eventually win her heart?

For rancher Chance Braxton, Josie Monroe was the classic girl next door. He’d fallen early and hard, but because her heart had belonged to his careless and indifferent brother, Chance had been permanently friend-zoned since Josie was a teen. Now Josie’s running her failing ranch all alone, and it’s time for Chance to step up and keep a promise he made to her dying mother –  marry Josie and combine their ranches.

Josie Monroe doesn’t want help or need to be saved by anyone – especially her wealthy ranching neighbor and forever thorn in her paw, Chance Braxton. The serious, way-too-handsome cowboy has starred in too many of her fantasies, but he still sees her as a heart-broken girl. She’s a woman now, and she’s determined to prove everyone wrong: She can save her ranch and rebuild her father’s legacy…alone.

When Chance proposes, Josie’s problems are just beginning. So why does her pulse kick up every time he rides by and tips his Stetson?

Chance Braxton glanced up at the slate-colored sky overhead as he approached the old building. A weather change was on its way. He could feel it in his bones and in his spirits. His brain told him he should be out on the range, helping his crew roundup the last of the horses and move them to winter ground, but instead he was here. Same story, different day. His gaze latched on to the fact that the door to the old hay barn was partly open…just wide enough to allow someone to slip through. If his hunch was correct, he would find the person he sought inside. He eased the door open just a tad wider and slipped his tall, broad-shouldered frame through as quietly as possible.

Once inside, he paused to allow his eyes to adjust to the dim light. Ears were attuned to any sounds, and it didn’t take long before he heard a soft sniffle…and then another. Familiar sounds that had a way of tugging at the heart Josie professed he didn’t possess inside his chest. Chance moved deeper into the large room with its overhead loft and his gaze swung upward to where the sounds came from.

He moved to the stairs and eased up them, not wanting to startle the person he sought. On the top rung, he stopped as his gaze lit on the slight figure sitting with her back to him, now and then her slender shoulders moving in a soft shudder. Taking a deep breath, Chance kept his tones low.

“So what’s my brother done now?”

In an instant, the girl’s hands went to her face in a quick wiping motion. It was evident she didn’t want her tears to be seen. But Chance was used to seeing them and, each time, he had to harden his resolve even more. The problem was, he didn’t know how much more resolve he had in him. She didn’t answer him right away, but when she did, it was with a question of her own.

“Do you ever wish it was a different time? You could maybe fast-forward into the future…ten or fifteen years? When your life would be settled, and you’d know where you belonged…and who you would be with for the rest of your life?”

It was about his brother. Chance blew out a deep breath and eased forward, to settle on the edge of the hay bale beside her. The loft door was open before them, and a soft breeze filled the area around them in the late afternoon. He swept his Stetson off his head and ran a hand through his thick mahogany-colored hair. It was important to give the question some consideration.

“That’s a mighty interesting idea, Josie. I guess each of us does that now and then. But trying to look for a glimpse of the future is sort of like looking into a crystal ball. I never could make out too much in those things, either. Guess I prefer to stay in the here and now and leave tomorrow to itself. It’s going to come in its own time. And if you’re so intent on the future, you’ll be more likely to miss something important in the present.”

“Chance’s sage words of advice… you’ll probably have met your soul mate and gotten married and had kids by then.”

The rancher slid his gaze over at the girl beside him. It was getting more difficult by the day to remain in the role of the “big brother” that Josie Monroe had cast him in over the last few years. But he also knew it was as much his fault as hers for allowing it to happen. He used to be able to give her his shoulder to cry on and then wipe away her tears. She had outgrown that need…and holding her nowadays lent itself to a whole different set of complications so he made a concerted effort to keep his distance.

“I can only hope that’ll be my future. It sounds pretty good. I think the same could be said for you.”

“I doubt that. I’ll probably be an old maid rancher.”

He couldn’t help it. The laugh burst out of him before he could stop it. The rising of her hackles was immediate and matched with the fire in her eyes.

“Yes, it is, little one.” His voice softened a bit, and he settled his blue-eyed gaze on her profile. “Look at me and listen.”

“What? Do you have some more of Chance Braxton’s words of wisdom to share? And why do you continue to call me by that silly nickname? I’m not ‘little’ any longer. And you’re not all that older than I am… six years doesn’t make you an expert on everything.” Her chin came up in pointed stubbornness, and her tear-washed gray eyes settled on him. She was just a week past her eighteenth birthday but had always been a lot more mature than others her age. Except for when it came to her bruised heart. He had to keep reminding himself of that fact…plus the fact she fancied herself head over heels in love with his brother.

“I realize you aren’t little any longer, Josie. It’s just a habit. I’ve called you that since you were a little girl in pigtails, and I can’t seem to break it. And I have no words of wisdom. They just come from having lived a few years longer than you and having a good deal more experience with life under my belt. Slow down…don’t be in a hurry to grow up and skip over too many years. Life isn’t a race. Trust me. You’ll find your soul mate one day. When you least expect him…he’ll be in front of you. And then all the tears and the pain you felt along the way, they’ll vanish from your memory.” A few long moments of silence surrounded them.

“But he won’t be Dev, will he.” It wasn’t a question…more like a sad statement of an undeniable truth.

Chance drew in a slow breath and then eased his words out. “I doubt that very much, Josie. You deserve someone a lot better than my young brother. Just keep your mind and heart open to allow for someone else to have a chance to win that heart of yours. It’s a treasure the right man will guard and cherish with his life.”

“You really think there’s someone better for me in my future?”

“I think once you let go of the idea that you’ve built around Dev as being the ‘perfect’ person, standing on a high pedestal, your heart will open to other possibilities.”

She rounded on him in an instant. “Why do you say such things about your brother? Just because he isn’t like you, doesn’t mean he is less.”

“I didn’t say he’s less anything, Josie. It just seems that more and more of late, you get defensive anytime anyone says anything about him in your presence. Maybe you need to look at why that is. It’s not like he hasn’t given people plenty of reason to look at him without blinders on over the years.”

“I know why I defend him. Someone should be on his side. He can’t help it if he isn’t tough as nails as you are, if he doesn’t care about staying on a ranch all his life. And maybe I know how it can be… always having people make assumptions about you without any real facts to back them up. People look at me, a girl trying to be a rancher…they think I’m playing dress up or some silly game. It isn’t a game to me…it’s my life. They just don’t want to see that. That’s how it feels at any rate.

“I may not be a male, but I can ride and rope and work cattle just as good, if not better, than a lot of the guys around these parts. But seems like I have to keep proving that each day the sun comes up. And, one of these days, the people around here will know I’m just as good as they are. And that’s the same for your brother. Dev’s going to be a success, and you’ll end up envying him.”

Chance was silent for a few moments…more so to gain control of his mounting frustration than anything else.

“Maybe I already do.” The words were low and said in a disgusted growl. He stood at that point. If he stayed, he might say too much. “There are already a good number of people who admire what you’re trying to do with this ranch and the way you’re trying to help your parents out. There will always be those old-timers who will go to their graves with their beliefs because that’s the way they were raised and have lived for decades. But times are changing every day, and female ranchers can hold their own…they just have to be tougher than most. Now, I’ve got work to get done, and you’ve got your chores. Just don’t get in such a hurry to grow up…little one.”

Chance left the loft, but not before catching the look of confusion in her gray eyes. He could understand confusion…and frustration…and nerve-bending patience. He had made his decision a while back where Josie Monroe was concerned. He had prepared himself, because it meant he would have to have a thick hide and a deep well of patience. But it really was the only choice he could make, because once you found your soul mate…you’d face whatever came in order to have that person’s heart. In the meantime, he’d remain where he was…by Josie’s side…a silent protector.

True Blue Cowboy is available in the following formats: 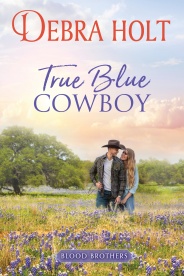 Did you know that True Blue Cowboy and many titles are available digitally from Tule's own bookstore? Check it out!