Holiday at the Graff, Book 1

Holiday at the Graff, Book 1

Halloween at the Graff

Starting over at thirty-two is never fun, especially in a town the size of a postage stamp. Chasing that with having to beg for a job she’s wildly over-qualified for and Walker Wilder’s pride is really burned. But now that she’s the new events director for the historic Montana Graff Hotel, she’s tasked with creating buzz and traditions to fill rooms during the off-season. Halloween may not scream touristy, but hiring a spirit-hunting TV crew will definitely grab some headlines… But when the sexy spirit hunter shows up, he haunts more than her dreams.

Calum Quest is done. He’s created an entertainment empire by chasing something he’s never seen and is tired of asking questions with no answers. His life has been defined by ghosts he needs to exorcise, yet, when a red-haired, grey-eyed beauty with a body that melts his mind pours him a double shot of Laphroaig whiskey and challenges him to one more round, how can he say no?

“At least you weren’t convicted.”
Never had Walker Wilder, now reluctantly dusting off the ashes of her previous life to
masquerade as Walker Kent—her mother’s maiden name—imagined such words directed at her,
especially as an attempt to comfort. Of course she’d never been arrested, much less tried and
convicted. For what? She’d grown up in Newport Beach, California. Graduated magna cum
laude in political science and US history from UCLA—taking full advantage of her lacrosse
scholarship. Walker had spent her teen and college years working on political campaigns
becoming a policy researcher at sixteen and later a speech writer before she turned eighteen for a
state congresswoman. Walker’s entire professional career had been working with one US
senator, first on her hard-fought campaign and then moving up the ranks until Walker was finally
the senator’s chief of staff.
And now what?
She was tiptoeing around a dusty and forlorn hotel attic in a western town that could have
been the movie set for The Magnificent Seven, looking for Halloween decorations.
In Montana.
Seriously.
Big sky country.
No one, least of all Walker, would have seen this coming.
Walker glanced at a battered wing back leather—at least she assumed it had been leather—
chair that sat in the middle of the floor facing out towards the end of the attic where two narrow
grime encrusted windows let in zero light from the early October late afternoon. There were
other pieces of furniture lurking, shrouded in dingy sheets just holding their breath to expel
clouds of dust, along with wooden crates, crumbling boxes, and piles of… who knew what?
Walker had zero experience in small towns and non-urban areas.
Still, she was the fixer. The spinner. The press whisperer. The person who kept everyone in
line and on the same page. Or at least she had been. In DC. Now Walker stood in the center of
the attic of Marietta’s Graff hotel, a grown woman of thirty-two and squeezed her eyes shut like
she was three again—if she couldn’t see trouble, it wouldn’t find her. Only she’d been found all
right. Horrifically. Picked up, shaken, smacked around, and tossed under a speeding bus. Her
life, her career, and her finances smashed beyond recognition.
So now she was a… what was her title? Event planner. Marketer. Public relations. A little bit
of everything and a big fat nothing. Certainly not enough money. But it was a job, and she was
grateful. Now she worked to promote a historic hotel in a small western town instead of as mover
and shaker in the nation’s capital.
Initially, Marietta had seemed a bit of a lark. And a lot of desperate. She’d always been a
little curious about it—not enough to actually come here, but now that she’d plopped herself
down, she wished she’d picked another point on the map. Any other point. Not that she’d
actually had any other options going. One of her former interns had been the only person to reach
out to her—out of the hundreds of people she’d worked with over the years—to offer any sort of
help with a job, a way out of DC and the circus of scandals and testimony her life had become.
Walker turned her attention to a wall of stacked boxes that looked somewhat newer than a
century old. Seriously, did no one in small-town Montana label boxes? Was she supposed to start
digging through dust and perhaps mouse pee and poop covered boxes for Halloween

decorations? She definitely needed protective gear—gloves, a mask, probably a pair of jeans.
And a new life while she was compiling her wish list.
She heard a small scraping sound behind her and jumped in her Louboutins. If that was a
mouse, she would not scream. She would not. Even if she’d never seen one outside a pet store.
Walker spun around ready for what? Was she going to battle mice now instead of other chiefs of
staff and lobbyists with her bare hands? Did mice have rabies? Disease? Wasn’t the west a
breeding ground for the Hanta virus? Did mice carry it or deer? She had no knowledge of
wildlife. Although plenty of DC operatives likely qualified. Even in her dire circumstances, a
smile curved lips.
No mouse. Just the chair. With a gash in the seat that the leather curled away from. For some
reason, Walker felt drawn towards the chair. She loved the metal detailing on the base of the four
wide legs. And along the top. There was also a plaque or a brass plate of some sort on front of
the wide arms of the chair.
A man’s chair.
She did not just think that sexist thought! What the heck was happening to her? A few days
in the rural west and her mindset slid back a century or two? She’d been thrown under the bus, to
the wolves, into the flames by a woman. Although a lot of men had participated. Gleefully, the
bastards. Schadenfreude was a cold-hearted enemy. Just thinking of facing the senate judiciary
committee—the questions, the heat in the room, the tension, the barely disguised malice in some
of the senators’ eyes and curling lips—still made her blood run cold and gave her nightmares. By
striking at her, they’d been striking at her senator, who had struck back using her chief of staff
like a cudgel and then a punching bag.
You don’t belong. You never did.
“Stop.”
It had become Walker’s go-to word when her thoughts galloped back instead of forward. She
was young. She was healthy. She would reboot and then reconquer. And she would not be
humiliated by this little professional, if one could call it that, detour. Back to Halloween, which
she had not even liked as a child probably because her twin, Rafe, had insisted on dressing up in
the goriest costumes he could piece together, often tearing up her clothes in the process, as if the
look he’d been going for had been drag queen zombie.
She’d opened her first box. Nope. Christmas star lights—pretty—when she heard the scrape
again.
This time she turned slowly. No. Way. The chair definitely angled towards her this time.
Like someone had moved it a little to watch her.
No. Way.
Walker swallowed and forced her body still. She was being absurd. She stared hard at the
chair. She was imagining things on too few hours of sleep. She was just tired. Mentally and
physically exhausted because of the last six months of hell, and the six months before had been
dealing with the brewing scandal sacrificed into the conflagration of ego, power plays, revenge,
and, just to keep things interesting, corruption and lawbreaking.
The chair had not moved. She was just responding to the atmosphere of the historic Graff
Hotel. There were no such things as ghosts.
“Ghosts.” She breathed, the first full smile in nearly a year curved the corners of the mouth.
This was an old, old hotel. Someone must have died here at some point. “Perfect.”

Halloween at the Graff is available in the following formats: 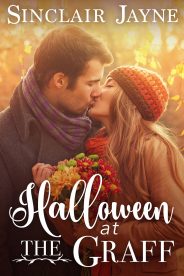 Did you know that Halloween at the Graff and many titles are available digitally from Tule's own bookstore? Check it out!