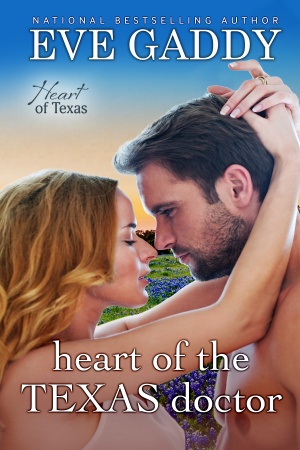 Heart of the Texas Doctor

Graham McBride is a cardiothoracic surgeon and the eldest of the McBride siblings. Dedicated, hardworking, traditional, and oh, yeah, hot. But Graham married young and divorced, and is now convinced no woman will tolerate his dedication to his career. When he meets Bella Benson at a party he’s immediately attracted to her, probably because she’s totally different from any woman he’s ever dated.

…but can they stay together?

Bella owns one of the local hair salons. She’s young, hardworking, successful and unconventional. And to Graham there’s no denying that, from the tips of her rainbow-colored hair to the soles of her fancy turquoise cowboy boots, Bella Benson is smokin’.

Bella is no more interested in getting serious than Graham. After all, other than a sizzling physical attraction, they don’t have a lot in common. But oh, that sizzle! Irresistible right? So they jump into the fire, both confident they can keep their emotions in check. Love and passion rarely stick with a plan, and while Graham has expertise in repairing hearts, he is disastrously clueless figuring out his own. Can he prove to Bella that he’s worth the risk?

Clara Perkins, aka the Matchmaker, was a nice older lady but for reasons unclear to Graham, she’d made it her mission in life to find him a girl. Him and his brothers, Turner and Spencer. But since he was the oldest of the McBride brothers, she was focused on him. He could hear her saying in her little-old-lady Texas drawl, “It’s criminal that a man—a doctor yet—of your age is still single. I’ve got just the girl for you.”

This was the latest in a seemingly endless line of women she’d introduced to Graham. Every one of them had been just the girl for him. At first he’d fought it, but eventually he gave up. It was easier to make a date than to deal with Clara’s disappointment if he didn’t. If they liked each other, fine. If not, it was one date. Most of the women were nice and he’d enjoyed them, but Clara had also picked a few real stinkers.

“Who is it this time?” he asked his brother, still with his back to the women.

“You’re in luck. Clara’s got Bella Benson with her.”

“Bella Benson? Oh, the one who owns Bella’s Salon on Main Street?” Last Stand was a small town, so he knew who she was, but they’d never actually met.

“That’s the one. Don’t worry, though.” Turner gave him a smart-ass grin. “I imagine you’re too old for her,” he said before deserting him.

“Chicken,” Graham muttered under his breath. Graham didn’t particularly like parties. He couldn’t stand to make small talk, which was also one of his problems with blind or arranged dates. It was hard to have a decent conversation with a woman you hardly knew. Nine times out of ten, if he didn’t bring a date, he’d get cornered by someone wanting to set him up with yet another woman. And he didn’t want to ask a woman out simply to discourage the matchmakers. It made him feel like a wuss.

But Minna Herdmann’s birthday bash was a command performance. Every year on April 7, Last Stand, Texas, hosted a birthday party for its oldest resident. This was the seventh year the one-hundred-two-year-old matriarch had been honored in that manner. Everyone in town was invited and most of them attended or at least dropped in to wish Minna happy birthday.

“Graham,” he heard Clara call out.

Resigned, Graham turned around to greet Clara and her latest protégé. He could always pretend to get a call from the hospital. After all, no one needed to know that he wasn’t actually on call today.

And then he saw her. Momentarily dumbstruck, Graham stared at the vision standing in front of him. Her blonde hair was long, falling well past her shoulders, with part of it pulled back in a braid with gold beads threaded through it. And it was streaked with rainbow colors. Rainbows. Pastel colors of turquoise, pink, purple, pale green, blue, and of course, blonde. It should have been hideous, or at the least, strange, but it wasn’t. Oddly enough, it suited her. But then, she was a good ten years or more younger than him and very pretty, to boot.

Then he realized Clara had the identical hairstyle and dye job, except her hair was pale silver and not as long. And streaked with rainbow colors. Wow.

At least they weren’t dressed alike.

Bella wore a sleeveless rainbow-colored minidress in the same pastel colors as her hair, turquoise cowboy boots on her feet and lots of bangles on her arms. She looked good. No, she looked hot. The thought disconcerted him a little but there was no denying that from the tips of her rainbow-colored hair to the soles of her fancy turquoise cowboy boots, Bella Benson was smokin’.

“Graham, here’s someone I want you to meet,” Clara said.

His gaze collided with Bella’s. She didn’t look nervous or ill at ease. Maybe she was as accustomed as he was to Clara’s machinations. She smiled at him. Damn, she had a dynamite smile. Why had he never really noticed her before?

Because she’s way too young for you, dumbass.

“Mrs. Perkins, how are you?” he asked, managing to collect himself.

“Now, Graham, you know I’ve asked you to call me Clara a million times. And I’m as fine as can be expected at my age. Though Minna’s got several years on me and look at her,” she said, waving a hand in the honoree’s direction. The matriarch sat under a huge awning on the patio of the Carriage House restaurant, also one of the oldest fixtures of Last Stand. Minna waved back, in the regal, old-fashioned way she had, prompting a smile from Graham. She wore a pale blue dress and her silver hair was braided and wrapped around her head in a style that had no doubt been popular almost a century ago when Minna was a young woman.

Taking Bella’s arm, Clara tugged her forward. “Bella, this is Graham McBride. He’s a doctor at the hospital. He’s a fancy kind of specialist. Something to do with hearts. Graham,” she continued, “this is Bella Benson. She owns the beauty shop on Main.”

“It’s nice to meet you,” Graham said, offering his hand.

She took his hand in a firm grip and smiled that beautiful smile again. Her eyes were brown. Luscious, chocolate brown, like that of a sweeter-than-sin candy bar. “Nice to meet you, too.”

Her voice was husky, with more of a drawl than a twang. He was intrigued, and growing more so, in spite of his irritation at being railroaded by Clara once again.

“I’m going to talk to Minna,” Clara announced. “Bella, you’re a sweetheart. It’s been fun being twins,” she said with a twinkle in her faded blue eyes. “I may be back in before long to have you do something permanent in the color department.”

“Any time, Clara.” She smiled at the older lady and watched her go. Then she turned to Graham and said, “Number fourteen.”

Graham blinked. “Excuse me?” What the hell did that mean?

“You’re the fourteenth man Clara’s introduced me to. And judging from your expression when you first turned around, I’m guessing I’m about number forty-five of the women she’s introduced to you.”

He stared at her for a minute, then threw back his head and laughed. “I didn’t realize I was so obvious. As to the number, I stopped counting a long time ago.”

“Ah, but you’ve known her longer than I have.”

“True. Clara was one of my father’s patients before he retired.” He steered her toward a table, guiding her away from the center of the patio.

The Carriage House, both indoors and out, was decked out in balloons, streamers, flowers and Texas memorabilia. Chairs and tables of all sizes were spread out over the flagstone patio, and music played softly from outdoor speakers. Graham congratulated himself on scoring one of the last remaining tables with a little shade.

“You realize Clara is going to immediately announce to all her friends that she is the matchmaker supreme,” Bella said, taking a seat.

“No harm in that.” Not exactly true. If Clara thought she’d finally found him a girl he liked, he’d never live it down. Then again, maybe she’d quit throwing women at him.

Bella nodded in Clara’s direction. “She’s already at it. See her talking to Mrs. Herdmann?”

“Mrs. H is the guest of honor. That doesn’t mean they’re talking about—” He broke off as both ladies turned to stare right at them with wide smiles. Clara even winked.

Bella laughed. “Don’t worry. They’ll forget all about us once they realize we aren’t going out together.”

“You’re probably right,” he said. “But what if we do go out together?”

Bella crossed her legs, showing a stretch of shapely, tanned leg when her dress rode up a little. “Why, are you asking me out?”

“Yes,” he said. “Can I take you to dinner Saturday night?”

Heart of the Texas Doctor is available in the following formats: 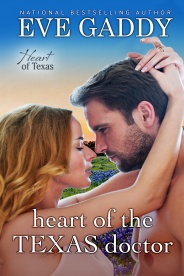 Did you know that Heart of the Texas Doctor and many titles are available digitally from Tule's own bookstore? Check it out!