The What Happens Series, Book 1 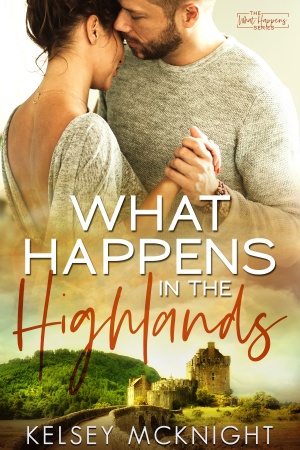 The What Happens Series, Book 1

What Happens in the Highlands

Match made in heaven or maid of dishonor?

Tight-laced Rose Hensel arrives in Scotland for her best friend’s wedding with a plan—to be the greatest maid of honor ever, let loose for the first time in years, and find out what Scottish guys really wear under their kilts. After meeting the best man, she thinks she found the man who checks all the boxes for a no-strings-attached romp among the heather.

Lachlan Calder-Mackinnon knows how to show a girl a good time. Gourmet dinners in castle ruins, picnics among rolling hills, and a seaside escape create some unforgettable dates. But as the fling begins to morph into something more, an unexpected wedding guest threatens to ruin Rose and Lachlan’s new romance.

With a plane ticket in one hand and her broken heart in the other, Rose prepares to head home to reality. However, she’s about to learn that what happens in the Highlands don’t always stay there.

Looking around at the myriad of signs that hung over other people’s heads, I shouldered my heavy carry-on, feeling the straps dig in, and began pushing through the crowd. I had been wandering the terminal for some time, searching for somewhere to get a decent cup of coffee. But my search was in vain. While a seven-hour flight wasn’t terrible to some people, I needed caffeine to survive and airplanes have the weakest brew of them all.

But now that someone was apparently searching for me, I had the renewed strength to continue on with my hike around the busy halls with a more concrete destination. Knowing my luck, I was being called because my bag had never arrived or had been searched by security and all my stuff was strewn all over the cargo hold of the plane and they needed me to identify my hairdryer on the tarmac.

The baggage claim was just as crowded as the rest of the airport with former passengers milling around, dragging luggage and small, cranky children behind them. I peered over the top of the carousels, trying to figure out exactly why I had been summoned and what I was supposed to do now that I was there. It hadn’t been that long since I deplaned and it seemed like overkill for someone to page me over the intercom because I waited twenty minutes to pick up my single, large suitcase.

“Rosie!” a voice called out, reaching me at once.

I scanned the faces for the familiar one I knew was calling for me. It took less than a minute to find her bright orange curls bouncing around her face. She held a sign that said Rosie Posey in large glitter letters above her head and she jumped in excitement. While Scotland was the stereotypical land of the redheads, Katie Kazakov hardly blended in.

“Katie Cat!” I yelled in response, dropping my bag to the floor and throwing my arms around her neck as soon as I reached her.

She pulled back, looking me over. “I can’t believe you’re finally here!”

“And I can’t believe you’re getting married! Let me see the rock.”

Katie held out her hand, showing me a sizable solitaire. “Sean says the diamond’s from his great-grandmother’s ring. Isn’t that romantic?”

“Totally. But I got paged by… someone and—”

“Oh, that was me. When I didn’t see you with the rest of the people around the New York City carousel, I kinda freaked a little. But I did get your suitcase already.”

I looked around her. She didn’t have any bags other than her own purse. “Where is it?”

“Oh, the driver put it in the car already.” She waved a hand then hooked her arm through mine, pulling me towards the door. I hardly had time to grab my carry-on as we passed it.

“You have a driver?”

“Yeah. I’m getting the hang of driving on the other side of the road, but the traffic in Inverness is a little more than I’m used to in Nairn, so Sean had Mattie drive.”

“One of the garden guys or something.” She looked around at the line of cars then pointed to a sleek black one parked by the sidewalk. “Here he is!”

Mattie was an older, stooped gentleman in khakis and a faded blue button-down. He had a pleasant, weathered face and smiled as they approached. “Miss Kazakov, Miss Hensel.”

“Thank you for getting my bag,” I said as he opened the back door for us. “Really, I could have gotten it.”

I shivered a bit when I was engulfed in the warm interior of the car and pulled out the sweater I kept in my carry-on bag, putting it on. “Katie, I thought it was supposed to be summer?”

“Because it’s Scotland,” she said as if it were the perfect explanation.

I glanced at her thin, long-sleeve shirt and jeans. Not exactly like the June wardrobe we’d wear back in New Jersey. In my yoga pants and T-shirt, I felt particularly undressed for the weather. I knew it wasn’t going to be the balmy temperature I was used to, but it was still a bit of a surprise.

“What does Sean do that he has a gardener and driver?” I asked in a hushed tone.

“Oh, Mattie’s the family caretaker. He’s in charge of making sure I stay out of trouble. Right, Mattie?”

“Aye, been workin’ for the Calders goin’ on forty years, I expect,” he answered from the front seat as he pulled out into the line of traffic. “But Miss Kathryn really keeps me on my toes.”

I was startled for a moment. For my entire life, she had been nothing but Katie to me. The only time I ever heard her referred to as Kathryn was on the first day of school when teachers would take roll. Only when we were too loud in the middle of the night during sleepovers or made a mess in the yard when we attempted to tie-dye our Backstreet Boys shirts did her parents ever call her Kathryn.

“Mattie’s the best,” Katie gushed. “He’s really been a lifesaver when it came to me learning how to drive here. Sean was going to teach me, but he kept making me so nervous.”

“Is it really hard to get used to being on the other side?” I asked.

“Ugh, I’ll give you the full play-by-play on the horrors of left-side driving later.” Katie smiled, her excitement bubbling over again. “I can’t believe you’re here. I’m so, so, so happy to see you.”

“Same. I only wish Savannah could be here.”

“Me, too. But I can’t really blame her. She’s a midwife, so it’s not like she could just abandon her patients.”

“I know. It just would have been really nice to see her, but I knew when I decided to get married so fast that some people couldn’t come. I told her I’d send lots of pictures though when you got here, which reminds me…” she pulled out her cellphone and snapped a selfie of us together and sent it to our absent sorority sister and college best friend.

“It’s been really quiet without you around. I’ve had to hang out with other people on the weekends since Savannah’s always out delivery babies and putting on classes.”

“But you’re going to be a wife,” I mused, looking out the windows at the passing city of Inverness.

It looked almost the same as any other in America, at least when it came to the tourists and people that milled around the busy streets. But the old stone buildings and steeple-topped churches told a different story. I could also see the tops of sailboats as we drove and wondered if fishing had been the thing to make the ancient village grow into a thriving city.

“I feel like it was just yesterday that we were going to kindergarten together, dorming together in college, and pledging a sorority… now you’re getting married.”

“I know, isn’t it crazy? But you’re going to love Sean. He’s super sweet and so considerate and… you’re just going to love him, Rose.”

“If you love him, I’ll love him. I just wish I could have made it over here before you got engaged and everything.”

She shrugged and dragged her fingers through her curls. “It’s not like I gave people much time. When I came here for work, I was only supposed to oversee the opening of a few stores, not meet a man and marry him in the span of three months.”

“If he could woo you in less time than it takes for me to get a reservation at George’s back home, I’m sure he’s a catch.”

“Trust me, he is. Something about the accent is just so swoon-worthy, right Mattie?”

Mattie glanced at her in the rearview mirror. “Oh, aye. Nothin’ like a good touch o’ Scot charm to turn the lass’s heads.”

“I do love a good accent,” I sighed with my hands clasped, summoning my inner southern belle. “And I think the Scottish variety might be my favorite.”

“Then you’re in luck. I have plenty of single men on the guest list. Maybe you’ll fall in love too and never leave.”

“Come on, how great would that be? You’d marry one of Sean’s friends or cousins and we’d all live happily ever after and be neighbors and raise our kids together and—”

“The only kind of romance I’m looking for is the kind that ends in the morning,” I murmured, careful to not be overheard by Mattie. “I need to find out what a Scotsman wears under his kilt.”

“Hey, Sean’s family now. That doesn’t count.” I peered back out the car window, looking to change the subject. “How long until we’re at the hotel?”

“Only a half hour, thankfully. Was your flight okay?”

“Pretty nice, actually. I splurged on the first-class tickets.”

“Cash in on all those airline miles?”

“Yeah. I haven’t taken a vacation in six years since college. I needed to do something with them.”

“No, not that old… well, maybe you are, since you’re about to get married.”

She reached out, punching me jokingly on the arm, grimacing dramatically. “Hey, I am a glowing goddess of matrimonial bliss and you shall bow down at my altar.”

We locked eyes for several moments, the only sound in the car was the faint rumble of street life outside. And then we burst into laughter, the kind that hurt our sides and made us tear up.

God, I was going to miss her.

What Happens in the Highlands is available in the following formats: 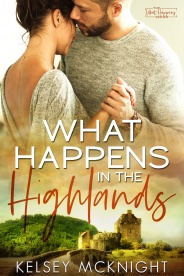 Did you know that What Happens in the Highlands and many titles are available digitally from Tule's own bookstore? Check it out!