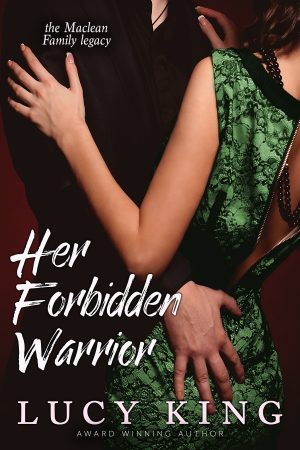 Breaking up isn’t that hard to do…

Not when Cora Maclean’s cheating scumbag of an ex disappears with a ring that has been in her family for a century. It’s the putting her life back together afterwards that’s the problem. How hard can it possibly be to go to Spain, find her ex and persuade him to return the heirloom? Her plans definitely do not include rekindling a decade-old crush on a man who once broke her heart.

Former special forces operative turned businessman, Lucas Hart, has a job to do–one that now includes keeping reckless Cora Maclean out of danger. So what if she’s more gorgeous than he remembers? She once hurt him badly and that’s not something he’s inclined to forget. His sole aim is to finish the job while keeping her safe, and he has absolutely no intention of falling under her spell again. Besides, Cora has sworn off men for now.

Lucas Hart sat at his desk in his penthouse office on the tenth floor of the central London building that housed his company, utterly gripped by the real-time action unfolding on the monitor in front of him.

Somewhere in the middle of a desert several thousand miles away, half a dozen men were running towards the square shape of a hut, their blurry white shapes moving swiftly across the grey sea of sand. As they reached the building, they fanned out to surround it, and then, once in position, they held absolutely still – until a moment later, when one of them lobbed in a smoke bomb and that patch of screen went white.

Every muscle in Lucas’s body tightened as he waited for the screen to clear, experience automatically filling in the blanks as the seconds ticked by until the hut became visible once more.

What the hell was taking so long? he wondered with a frown as the men failed to emerge. What were they doing in there?

Possible scenarios flashed through his head, making his pulse race and adrenaline surge, and then there they were, exiting the building and heading back in the direction they’d come from, making for the helicopter that would bring them home. Only now, he could now make out the shapes of seven individuals, which meant that the operation had been a success, and God, was that a relief.

Lucas sat back and rubbed a hand along his jaw, the tension easing from his shoulders as he watched the progress of the men with continued fascination and not a small degree of envy. Only a handful of people knew that inside the hut had been an oil executive who’d gone missing four weeks ago, much to the distress of his colleagues and family. The same handful of people knew that Lucas’s company had been hired to negotiate with his kidnappers and, when that had failed, to locate and rescue him.

Fewer people than that, though, knew that once upon a time Lucas would have been one of those dark, shadowy men, parachuted in to extract the subject with the minimum of fuss, following orders, no questions asked.

These days, as owner and CEO of Hart Solutions, a global business providing services that ranged from corporate fraud investigation to political risk analysis to crisis response, Lucas gave the orders rather than received them, but that didn’t mean he didn’t occasionally miss the thrill of danger and the wits by which he’d lived on and off for nearly a decade.

More than occasionally, if he was being brutally honest, which was why the infra-red footage that was being captured by an overhead drone and streamed live to his desktop was so compelling.

When the dissatisfaction had begun to set in he didn’t know. He’d left the army to set up his business four years ago, and it had been very much the right decision at the right time. Growth had been rapid, the learning curve steep. When he’d realised he lacked gravitas and experience in the civilian world he’d brought it on board, and now his company was number one in its field and his reputation was solid.

He had nothing whatsoever to complain about, yet despite his success, he’d woken up one morning a couple of months ago with the niggling feeling that something was missing. Initially he’d dismissed it as absurd since his life was pretty much exactly the way he wanted, but it refused to go away, gnawing at him with increasing persistence until it had become virtually impossible to ignore.

Maybe he needed to take a break, he thought, frowning as he glanced away from the screen to pick up the phone that was ringing and vibrating its way across the desk. Maybe working virtually non-stop for four years had consequences he would now be wise to heed.

“Yes?” he muttered, eradicating the possibility of burnout the instant it entered his head because of course he wasn’t burning out. In all likelihood some time off would fix this ridiculously inappropriate ennui.

“We may have a problem.”

Stifling a sigh of frustration, Lucas swivelled round, reluctantly cutting from view the still-flickering images in order to focus. Felipe was the operative who, thirty-six hours ago, he’d assigned to watch both an empty villa in Marbella and the man who’d broken into it and made it his temporary home. The job, which had started off as a simple matter of tracking down two missing persons and one stolen family heirloom, and which he was doing as a favour to an old school friend and should have been a walk in the park, had been a problem from the start. Judging by the tone of Felipe’s voice it sounded like that wasn’t going to change any time soon. “What kind of a problem?” said Lucas, just about managing to keep a lid on his frustration.

“The target just had a visitor.”

“A female. Brunette. Mid to late twenties, I’d estimate. Approximately five-seven, slim, well dressed. She entered the house at 1804 and left at 1856, local time. I believe she poses a significant risk to the operation and as a result of her visit could be in danger.”

“Why?” said Lucas, the frown creasing his forehead deepening. “What was she doing there?”

“I’ll email over the audio file. It’s all there.”

“His ex-fiancée, it would seem. First name, Cora, surname unknown.”

As the information hit his brain Lucas nearly dropped his phone. All thoughts of desert operations and dissatisfaction fled from his head, and every sense he possessed jumped to full alert because what the ever-loving hell? He must have heard that wrong. “Say again?” he said sharply.

Damn, Lucas thought grimly as irritation and disbelief blasted through him. Apparently he hadn’t misheard. And her surname wasn’t unknown to him. Not bloody unknown at all. What was unknown was what Cora Maclean was doing in Spain this afternoon when only yesterday evening they’d agreed on the phone that she’d stay put in London while he dealt with her increasingly shifty-looking ex in Marbella.

“Want me to send over a photo?” said Felipe, and Lucas scowled as the image of her slammed into his head.

“No need,” he muttered. He may not have seen her in a while, but he knew damn well what she looked like. What she felt and tasted like, too, not that he ever thought about that hour they’d spent together all those years ago. “She’s the client,” he added, ruthlessly obliterating the images flashing unbidden through his head, of hands and mouths and so much damn heat because that was all she was now. The client. Nothing else.

“Any change to my instructions?”

“Not for now. Stay on Brad. I want details of who he meets and where. Don’t let him out of your sight. Keep me posted with any developments.”

Her Forbidden Warrior is available in the following formats: 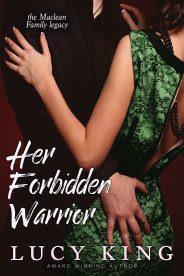 Did you know that Her Forbidden Warrior and many titles are available digitally from Tule's own bookstore? Check it out!