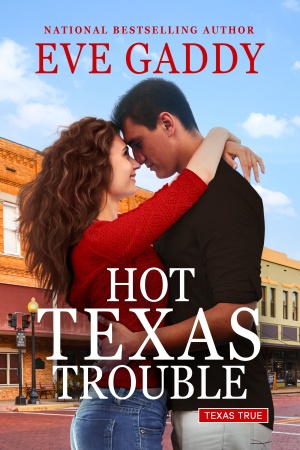 She’s had enough excitement to last a lifetime…

Jedidiah Walker has spent years embracing danger as an undercover agent for a secret government agency, but she barely escapes with her life when a mission goes south. Her fiancé and long-time partner isn’t so lucky. Burned out and grieving, Jedidiah returns home to Whiskey River intending to create a new, perfectly boring life. A job with app designer Trevor Holt is a dream. She can use her computer skills without death looming, and nothing says “safe” more than a computer geek.

Not exactly. Trevor may design apps, but he’s also tatted, muscular, and rides with a motorcycle club that provides support to exploited children. While sparks sizzle between them, Trevor’s conscious that as her employer, any romantic moves need to come from her.

Jedidiah falls hard for her sexy boss, but she senses he has a dangerous side that is beyond tempting—and precisely what she’s determined to avoid. Can Trevor convince her that what they have is worth the risk?

Some women stopped hearts when they walked into a room. Jedidiah Walker was one of those women.

Trevor Holt had been invited to Damaris Walker and Nate Kershaw’s wedding reception, along with nearly everyone else in Whiskey River and the surrounding towns. He knew Nate and had met Damaris. The saying was all brides were beautiful, but the word wasn’t nearly enough to describe this bride. Trevor thought Kershaw was a lucky man. Then he got a look at the woman standing beside the bride, dressed in a long emerald-green dress, with her dark auburn hair pulled back in some kind of fancy braid, and he almost swallowed his tongue.

“Who is that?” he asked Justin Rogers, his friend and fellow veteran who stood next to him. Trevor didn’t go to a lot of weddings or receptions, but Nate was a friend so he’d sucked it up and gone.

“That, my man, is Jedidiah Walker. Sister of the bride and baby of the Walker clan. Come on, I’ll introduce you.”

“Pass.” He’d known women like her before. Case in point, his ex-wife. All looks, no brains. In Raquel’s case, what brain cells she had were dedicated to calculating how much money she could take him for.

“Why did you ask if you didn’t want to meet her?”

“Dude, I’m not blind. But I’ll just admire her from afar and not ruin it by having to talk to her.”

Justin shook his head. “All women aren’t like Raquel.”

“Most of the beautiful ones are.” Nothing was going to convince him otherwise.

He wound up meeting her anyway. One of Jedidiah’s brothers, Gabe Walker, who was a friend of his, introduced the two of them. “Trevor, just the man I was looking for. This is my sister Jedidiah. This is Trevor Holt. He’s a friend of mine so be nice.”

“Nice to meet you,” he said, holding out a hand.

“Hi. Nice to meet you,” she said in a tone that implied anything but. She shook his hand with a firm grip and let go quickly.

Her voice was husky and low-pitched. Bourbon and honey. She was even prettier close up, with her green eyes and perfect complexion. She didn’t look any more pleased by the introduction than he was, which he had to admit intrigued him. Gabe wandered away and the two of them stood there like logs. “Would you like to dance?” he asked, albeit reluctantly. Dancing wasn’t his thing but what else was he supposed to do?

Such enthusiasm. They went out on the dance floor and thank God it was a fast dance so they didn’t have to talk. When the dance was over and it segued into a slow song, he asked, “Are you thirsty? Why don’t we get a drink?”

They walked over to the bar and picked up a couple of glasses of champagne. She sipped hers, still not speaking. Wow, he wasn’t sure he’d ever met a more taciturn woman. Annoyed, he finally asked, “Did I do something to offend you?”

She looked surprised. “No, why?”

“Generally, people at least try to have a conversation when they meet. You’ve said fewer than ten words and five of them were ‘hi, nice to meet you.’”

“Oh, sorry,” she said with a semismile. “Gabe has been introducing me to every single man who’s here. It’s irritating as hell.”

“No. I’d just as soon talk to you as anyone else.”

“You call what you’ve been doing talking?”

He didn’t, but he decided to let that pass. “So, Jedidiah, what do you do?”

“Nothing at the moment. I’m in the process of moving back to Whiskey River. What do you do?”

“Really? Are you any good?”

“How am I supposed to answer that?”

“I didn’t say that. I’ve had some success.” More than some but he wasn’t going to admit that to this strange woman.

“Have I heard of any of your apps?”

How the hell would I know? he wanted to say. “I don’t know.” Goaded, he named a couple of his better-known apps.

“Sorry. Haven’t heard of them.”

“Why? I like apps as much as the next person.”

She might be beautiful but she was just plain weird. He cast around for something to say. “How long have you been away from Whiskey River?”

“A long time except for occasional visits. I left when I was eighteen.”

He guessed she was in her late twenties, since he knew Damaris wasn’t thirty yet and Jedidiah was the youngest of the Walker clan. Good God, he’d never met anyone so difficult to have a conversation with. “Why is Gabe introducing you to single men? Obviously you don’t need any help.”

She laughed. The first spontaneous and pleasant reaction he’d seen from her. It made her even more beautiful. “I’m pretty sure my brothers and hell, Damaris too, have got a pool going about how long it will take me before I leave again. Gabe figures if I meet someone I might stay longer.”

“Didn’t you say you were in the process of moving? And they’ve already got you leaving?”

She shrugged. “I was always unequivocal about not wanting to live here.”

“I changed my mind.” She looked over his shoulder. “There’s a very pretty woman headed your way. I’ll leave you to it.” She walked away, giving him a good look at her gown’s low-cut back. Damn. Weird or not, she was a knockout.

No ‘nice talking to you’ or anything else. She just walked away. He wondered what it said about him that he was much more intrigued by her indifference to him than if she’d been easy to talk to. Like the woman who’d just walked up to him.

Marcy Belton gave him an enthusiastic hug and would have kissed him if he hadn’t turned his head. He liked Marcy. They’d even dated for a while. But he wasn’t looking for a relationship and she totally was, so that had ended quickly.

Before long he felt compelled to dance with Marcy and he breathed a sigh of relief when he finally got rid of her. There was definitely something wrong with him that the only woman he’d found interesting at this event was one who had absolutely zero interest in him.

Jedidiah wasn’t sure why she’d been so unfriendly to Trevor. Partly because he was at least the fifth man Gabe had dragged her to meet and her feet hurt and she was tired of being around so many people. When she wasn’t working, she was a bit of a recluse. And she liked it that way. Maybe it was a mistake coming home. After all, she hadn’t lived in Whiskey River in nearly ten years. It didn’t appear to have changed much. Same friendly but nosy people. Gossip still ran like a river, she’d already discovered. Basically the same Square. It had changed a little, but other than having a few more or different stores than when she was a kid, it wasn’t much different. So while Whiskey River hadn’t changed a lot, she sure as hell had.

You couldn’t be an undercover agent with a secret government organization for years and expect it not to change you. Even after she quit, she still—at heart—lived in the shadows. Not that she wanted to. Hell no, she didn’t. But retiring hadn’t changed her back to the girl she’d been. Nothing would.

Still, she’d made up her mind. She was done with the shadow-world life. That life had died for her when her partner and lover was murdered. She’d stopped doing undercover work and taken a desk job. Even that had been too much for her. Everything reminded her of her lost love. So she’d left it and come…home. Why was she resisting picking up the pieces of her old life? Her old, boring life. That was what she wanted now, wasn’t it?

No, she didn’t want boring. What she wanted was uneventful. Safe. Not dangerous or exciting. Damn, maybe she did want boring. She wasn’t an adrenaline junkie. Her taste for danger had left her the day her lover had been murdered.

Other than a few months when she first left Whiskey River, Jedidiah had been either in training or working for a little-known and mostly secret branch of the DEA. She’d liked it. Hell, she’d loved it. Her work had been challenging, exciting, and ultimately, fulfilling. That she’d fallen in love with a fellow agent hadn’t been a problem. At least, not until the end. But Noah was gone and had been for more than two years. She didn’t want to live the rest of her life longing for her dead love.

She’d actually liked Trevor. He was hot, but not full of himself as far as she could tell. And he was funny. If she hadn’t been so annoyed at Gabe, she might have made more of an effort to talk to the man. He’d been interested in her. At first, anyway. Probably not anymore.

She felt a twinge of regret. The guy was an app designer. Probably the exact type of man she should be interested in. If she was really looking for a man, which she wasn’t. Oh, well. If he’d been that easy to discourage then he wasn’t worth worrying about anyway.

Hot Texas Trouble is available in the following formats: 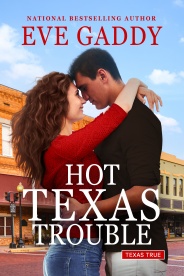 Did you know that Hot Texas Trouble and many titles are available digitally from Tule's own bookstore? Check it out!