Bridesmaid Amaree Lowell attends her long-time friend Whitney’s engagement luncheon in downtown Austin to celebrate and help plan the wedding. Little does Amaree know, she is about to be paired with groomsman Evan, her former high school boyfriend whom she hasn’t seen in eight years.

The chemistry still sizzles, with eight years only adding to Amaree’s curves and Evan’s sexual swagger. So when he invites her back to his room after the luncheon, she can’t wait. The tryst eight years in the making may start with a slow burn behind closed doors, but it soon explodes as clothes are shed and boundaries are pushed.

With the wedding approaching and more events on the horizon, Amaree and Evan know they will be spending more time together. Will their chemistry flame out or will their passionate lust turn into more?

Get double the story and double the burn in the rest of the Hotel Hookup series.

Whitney Weber thumbed an assortment of fabric samples while Amaree Lowell pretended to be interested. Amaree wanted to support her longtime friend, and she was thrilled when Mathew had proposed to Whitney. They were a perfect match.

But already Amaree saw early warning signs that Whitney might turn into Bridezilla.

Whitney paused at a satiny sample. “Do you like teal?”

Amaree winced. “For a bridesmaid’s dress?”

Whitney didn’t share her best friend’s disdain. “What if I pair it with something neutral?” She flipped to the back of the hinged sample pack. “Maybe a cream color? Or a warm caramel shade?” She continued flipping. “Or a gold?”

“No way.” Amaree couldn’t mask a visceral reaction. “Cool it with the metal tones.” Amaree certainly didn’t want to parade down the aisle as a bridesmaid at Whitney’s wedding looking like a second-rate Cleopatra. “And jewel tones aren’t so great either. Not universally flattering.”

There were, after all, five other women in the bridal party to consider, in addition to as many men. Between the bridesmaids’ dresses and the groomsmen’s vests and pocket squares, there were a lot of fabric decisions to make regarding attire alone.

Whitney pushed the fabric samples aside and grabbed her clipboard from the table at which she and Amaree were sipping mimosas. Whitney and Mathew’s Saturday engagement luncheon would convene in less than an hour. Both of their families along with the bridal party were all meeting to celebrate their upcoming nuptials.

And do some planning, if Whitney had her way. She was in full-on bridal mode, the wedding just ten months out.

She traced her finger down a homemade to-do list, reaching for a pencil. “I’ve got to get everyone’s size today to turn over to the tailor.”

The thought of announcing her dress size made Amaree cringe. She had always been more full-figured than her friend. Even though she took Pilates classes three days a week and stayed toned, she was simply built differently than stick-thin Whitney. Mostly, it was Amaree’s breasts. They were the fullest part of her figure, determining dress size themselves.

“So you’ve got to tell me your size.” Whitney poised her pencil next to a column on the page where Amaree saw her name.

Amaree couldn’t avoid this. “Put me down for a size twelve.” She sighed, knowing Whitney had never worn a size in the double digits her whole life. “Actually, let’s be on the safe side,” she insisted. “Fourteen. I’m carrying my winter weight,” Amaree joked of the extra five pounds she typically sported around the holiday season.

Whitney scoffed. “No way.” She eyed Amaree as if she were going to be pinning the fabric and cutting the patterns herself. “Size ten.”

“You’ve got to be kidding!” Amaree was incredulous when she saw Whitney scribbling. “Don’t write that!”

“Already did.” She lifted her pencil. “You’ve got a great body, Amaree.” Whitney’s sincerity shone through her words. “So what if the dress is a little tight? Show off those curves.” She smiled, pushed back her chair, and announced, “Now I’ve got to make sure to get everyone else’s. Including the groomsmen.”

“That reminds me.” Amaree downed the last of her mimosa and stood to join Whitney. “Do you know who I’m being paired with in the bridal party?”

A knowing smile spread across Whitney’s face. “Haven’t I told you?”

“Um, no . . .” Amaree elbowed her friend, curious why Whitney was being coy. “I would have remembered.”

“I’m sure you would have,” Whitney chided, still not answering the question.

“So are you going to tell me?”

Whitney hugged the clipboard to her chest, toying with Amaree’s question a bit longer. “Maybe.”

Amaree rolled her eyes. “Whatever. Not like it makes a difference.”

And with that, Whitney released a name, one that made Amaree’s whole body seize with recollection. “Evan.”

“Evan?” Amaree repeated, knowing that name could have only belonged to the one she immediately imagined. “That Evan?”

“Who else?” Whitney freed one hand to push in her seat.

Amaree leaned on the back of her own chair for support.

“It will be good for you two to see each other again.”

That was easy for Whitney to say. Her fiancé had remained friends with Evan, even though he and Amaree had broken up right before college. They were an intense couple in high school, but they were off to different universities after graduation. Continuing the relationship just didn’t make sense. It was a clean break, but a painful one just the same.

There were still feelings Amaree sometimes thought about, but she hadn’t done so in quite some time. Life had simply moved on for her.

But not with a man in it. She was starting the year off single.

Her breakup with Evan had been eight years ago. Amaree had heard Mathew talk about him now and again. But she certainly hadn’t kept up with details. What could Evan possibly look like now?

With the engagement luncheon formally underway in another hour, she was about to find out.

The Four Seasons Hotel Austin was a perfect choice for Whitney and Mathew’s autumn wedding. The January engagement luncheon that they booked on the hotel’s restaurant terrace overlooking Lady Bird Lake was going to be everyone’s preview for all the lavish food and service that would be part of their big day.

No doubt about it—folks in the city of Austin, Texas, knew how to entertain.

Whitney’s parents, thankfully, splurged for a block of rooms for out-of-town guests. Amaree nabbed a room on the sixth floor. She was well-acquainted with the downtown area due to her frequent trips to the state capital as an environmental lobbyist. Texas’ most valuable resource in the twentieth century had been oil. But, in the twenty-first, it was water. And she fought hard to lobby for protection of it. Whenever she made the trip into Austin, she also partied hard.

That was just what people in Austin did.

But, today, her focus was on Whitney.

“Let me just run back up to get something.” She wanted to retrieve a sweater to cover her sleeveless dress in case there was a breeze coming off the lake, even though it was an unseasonably warm Texas winter day.

“You’ll see the tables marked on the terrace.” Whitney called after Amaree, but she was already bounding toward the elevators, searching her purse for the room card as she walked.

Finding the card, which doubled as elevator security, Amaree inserted it into the keypad to access the sixth floor. She glanced at her watch, debating whether she had enough time to check her email once she got to her room. As the doors slid closed, a hand caught one, forcing them open again. Amaree startled at the sudden commotion.

“Hold that, will you?” a male’s voice led before she had a chance to see the face.

But she didn’t need to. She knew.

His recognition of her was as immediate. “Amaree.”

Even though eight years had passed since they were a couple, nothing in his voice changed. Her name still melted from his lips.

She took quick inventory of the hand that grasped the elevator door before he had a chance to move it. It was ringless, like hers.

Single, then. That makes two of us.

Evan shifted a leather duffle bag strap on his shoulder as he maneuvered into the elevator with Amaree. The weight of the bag pulled on his shirt, stretching the collar of his button-down to reveal a coppery neck, lean yet masculine. Amaree remembered his whole body being like that, even in high school. Evan was a walking sculpture of an Adonis, epitome of pure enchantment. And from what she could see now, he was still as classically handsome as any Greek figure. Time had transformed him into an even better version.

She caught herself daydreaming. She forced herself to reply, with a half-truth. “I didn’t know you were going to be here.” And she didn’t. Not until five minutes ago when Whitney told her.

“Well, here I am.” Evan stood closer than he needed to in an elevator that only included them. Amaree’s heart was already racing, and she wondered if his was doing the same. The doors slid closed.

Evan glanced at his card sleeve. “Eight.” He flipped to the back of it where there was writing from the check-in clerk. “I’m staying in suite 824.”

Is that an invitation? Amaree felt a rush of heat to her cheeks.

Seeing Evan in the flesh and hearing his voice made Amaree’s stomach leap. She wanted to respond back, but words couldn’t get past the lump forming in her throat.

Evan continued instead. “I’ve been thinking about you. Recently.”

And Amaree swore the last word dripped with sincerity.

She met his eyes and swallowed hard to find courage to reply. “Well,” she started, but already felt herself getting lost in his gaze. “We’ll have some time to catch up.” The heat in her cheeks moved into her chest, down her torso, and between her legs in a way that ached with an immediate sexual charge.

Instantaneous desire pulsed through her veins, blood rushing into parts that she yearned to place nearer to Evan. Even a small touch would do: a brush of her thigh against his or a stroke with the pad of her finger on the skin of his forearm. Surely he had to feel the energy that emanated.

If he did, his statuesque form didn’t falter. He stood steadfast, as if on exclusive display in the intimate space for Amaree’s eyes. And her libido.

A ding signaled the sixth floor landing, Amaree’s cue to exit. She had to consciously force her legs to step forward, even though they wanted nothing more than to lunge toward Evan instead.

Her move in the direction of a departure spurred Evan into a quick compliment, one that quieted any doubt about her appearance. “You look incredible, Amaree.”

His eye contact and sincerity were not lost on Amaree. Even though she struggled at times with her body image, she was much more of a woman now than when they were together in high school. And from the looks of it, he was much more a man.

They did have quite a bit of catching up to do.

Hotel Hookup: Austin is currently available in digital format only: 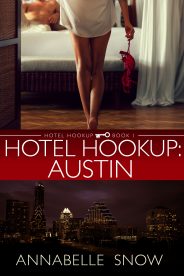