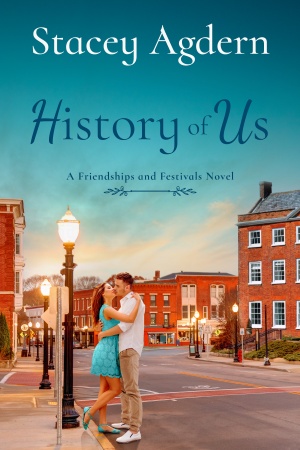 Do they have a future together, or is their relationship ancient history?

Anna Cohen, perpetual assistant at the Manhattan Museum of Jewish History, lands a golden chance to curate her own exhibit when her boss sends her to Rockliffe Manor, New York. She’s to assist an influential Jewish family as they organize an exhibit of their own in time for the town’s Summer Days Festival. While she’s there, Anna just needs to convince them to part with some of their archival history for an upcoming exhibition—something they’ve always refused—and not get involved with her ex, the family’s heir. Again.

Jacob Horowitz-Margareten wants to help save the world. Despite having no time to spend organizing his family’s archives, he’s always had a soft spot for Anna. The chance to spend more time with her intrigues him, but he doesn’t trust her boss or the museum she works for with the tangible bits of his family’s rich history.

As they work together, Anna and Jacob need to decide what’s more important: their history or the story their hearts are telling them.

One more card, and she’d be finished.

Anna Cohen finished writing the reference on the index card, put her pen down and took a deep breath. She’d been working late into the night, and had finally finished the first part of the exhibition.

It was such a relief. She stretched behind her desk, put her annoyingly straight brown hair into a bun, and sat back. The pressure was off, at least for now. Working on one of Jemima Kellerman’s exhibits at the Manhattan Museum of Jewish History was a great boost for her career for sure.

As she was about to check her email, she heard a knock on the door of her tiny office. “Come in,” she said.

“Are you finished with the cards?”

Anna straightened her skirt and stood, carefully moving the second of her cups of tea out of the way so that she wouldn’t knock them all over the reference books she’d been using. Details were important. “Yes,” she said as she headed toward the door, grabbing the cards from her desk.

Her boss stood on the threshold, just beyond the open door, glossy dark hair hanging just below her shoulders, brown eyes focusing on Anna, her skin as pale as the tips of her French manicure. “Anna, you look like you’ve pulled an all-nighter.”

Jemima was a personality to be sure. However, the head curator had her working on interesting projects that were in line with Anna’s areas of interest, just seen through a different lens. But no matter what she felt about the projects her boss assigned her, it was important that Anna do her job right, respect the history and the people who’d lived it.

“I have,” she said. “I got so lost in the stories, I needed to make sure I got the details right.” She passed over the cards and waited.

Anna couldn’t watch as Jemima flipped through them. If she did, she’d ask too many questions and interrupt her boss.

Jemima looked up, her eyes bright. “These are perfect. I’m so glad you’re on my team here. After lunch you’ll come to my office and we’ll talk about the next stage, hmm?”

The excitement and exuberance in Jemima’s voice was what Anna had dreamed of hearing from her boss. The praise in those first two sentences gave Anna wings—and courage.

Strike while the iron was hot?

Anna held her breath, nervous but ready. It was time. “If I have any ideas of my own for exhibits, would you be interested in listening to them?”

Jemima nodded. “Absolutely. Work up a proposal and bring it to me when you’re ready.”

“Thank you,” Anna said to her boss’s retreating back.

But it wasn’t until Jemima had disappeared down the hallway that Anna felt the real weight of what had happened. Because it had actually happened.

Jemima had opened the door to Anna potentially having an exhibit of her own. Finally.

This called for lunch. A celebration lunch of sushi, of course. She grabbed her coat, scarf, hat, purse, and headed out into the cold December weather. Her favorite sushi spot wasn’t far from the museum, but still far enough away that she had to bundle up.

A block away from the museum, on the opposite side of the street, was the Grove Hotel. Their famous dreidel display was scheduled to go up within the next few weeks, and she couldn’t help but head closer to sneak a peek at the window…

Only as she crossed the street, she saw a familiar figure, in a long, black coat, his brown hair flying.

Her first love. Her childhood best friend. Her most recent ex.

She hadn’t seen him since their last breakup a year ago in October. Their third. The same song, different verse—another missed relationship commitment (whether it was his or hers) and a text message, an echo of the previous breakup three years before that, and their first back in college. Since then, she’d managed to avoid Rockliffe Manor, the town, and Rockliffe, his family’s home, very successfully.

What was he doing here now?

Did she want to say hello?

Did she have to say hello?

All she knew was that he looked lost, and it wasn’t just the cold. His skin looked paler than usual, his normally bright blue eyes looked flat.

Her heart pounded against her chest as she got closer. He was…

He was so much. He filled her vision and her memory, taking up the space she thought she’d successfully banished him from forever in one fell swoop.

She had to say hello. It was their rule. “Jacob?”

Manhattan had a different rhythm from Rockliffe Manor, especially in early December. Faster, probably because it ran at its own pace as opposed to figuring out how to handle everybody else’s.

At least that was how Jacob Horowitz-Margareten saw it.

Early December was even more difficult. Triple-breasted suits and heavy coats reminded him of photos his ancestors had taken. The weight of that legacy always lay heavily on his shoulders, but this felt worse.

He’d have one fast meeting with the Brady Group, a group of investors he despised enough to inform them in person that he wanted nothing to do with them. He’d already fired the advisor who suggested working with them in the first place, something Jacob should have done months, if not years, ago.

Guilt was strong, but not stronger than his desire to work with people who didn’t take advantage of others. Not to mention, the list he’d received two years before from his father’s estate attorney had indicated the former investment advisor was to be given only one chance to prove himself, and this was it. Predictably, the man had failed. Jacob had also gotten really sick of the many times the advisor had suggested he move his accounts offshore “to avoid tax consequences.” There were only so many times he could say “not in this lifetime or the next. I believe in paying taxes.”

After Jacob personally helped introduce this set of aristocratic garbage to consequences and the SEC, he’d be done. He’d be free.

He could do something better with his time.

Like call his assistant and be on a flight to Texas within the next two hours. There he’d be able to observe the mobile office he’d set up down by the border. Making sure the staff was doing its job, acting as a helping hand.

His goal had always been to make sure organizations like the Jewish Immigrant Defense Society, and others that worked to help those caught in the net of governmental immigration and family separation policies, never had to go without anything. Ever. So that they could do their jobs protecting and advocating for the most vulnerable without focusing on the basics: rent, phone bills, office supplies.

Jacob didn’t want anything more to do with Brady; they’d not only taken money from Hayward but had also recruited him as the public face of this zero-interest grant campaign. Hayward was scum, smarm, slime, not even fit for shoe leather. He was dangerous, with an extensive list of arrests and charges stemming from the way he treated women and those who he believed “lesser.” Each of those charges had been dismissed, his record cleansed, contributing to the man’s mistaken belief that he’d never face consequences for anything he’d done.

He would learn otherwise.

But instead of letting any of that slip through his mask, Jacob turned and nodded. Christopher Hayward had waxy hair, the clear red undertones in his skin that smelled of alcohol even if his breath didn’t.

“Listen,” Hayward said. “We have a room inside, just waiting for you and…”

From the corner of his eye, he saw a figure moving quickly through the streets of Manhattan. Sure, agile, and familiar as the gloves he was wearing. His heart pounded.

He did not want Christopher Hayward to notice Anna in any way, for any reason. He couldn’t be trusted, not only because Hayward had a record that didn’t stick, but the idea of showing Hayward that Anna was someone important to him made him physically sick.

The only thing that would save him was the messy end to their last attempt at a relationship. All he could do was hope she wouldn’t decide it was time to approach him, and if she did, hope his mask held. Because he’d been many things in his life, but indifferent to Anna was never one of them.

She crossed the street, and as Hayward continued to yammer on about the interior of the restaurant where the meeting was to take place, his heart started to pound.

The sound of her voice caressed his eardrums. He thought of ice, the fjords of Norway, anything cold enough to chill his blood. He still noticed her bright brown eyes and the way her pale skin was turned bright by the cold. He managed a slight lift of an eyebrow, almost as if he were looking at her through a quizzing glass.

The clear upset in her tone shouldn’t hurt. He was ice, glass, frozen. Doing his best to make dammed sure the ticking time bomb standing to his right didn’t take an interest.

A heartbeat of silence. Two, three.

He tried not to look too closely at Anna’s expression, at the lip she bit, the quick movements of her eyelashes. He was ice, unyielding, unbending.

Only when she turned her back on him and walked away could he breathe again. It broke him, but it was over.

Thankfully, Hayward didn’t say anything. To him, Anna hadn’t even been important enough to grace the bottoms of his shoes.

The meeting lasted only two minutes, the amount of time it took for Jacob to denounce their scheme and watch the SEC agent he’d alerted shake hands with the gang and start his grilling.

Jacob had his car stop off at Abe’s Kitchen to get a quick sandwich for the ride back; a soda and a sandwich on rye was what he needed to get deep into his skin again.

There was much to do anyway. Paperwork back at the house. Scheduling for the next few days, and a Texas trip in the next twenty-four hours.

Calendars and appointments and organizing and…

He’d broken their rule, the one rule between them. The one that had lasted through friendships and attempted relationships, beginnings and endings and summers.

Years of history, the most important relationship in his life.

And there was absolutely nothing in the world he could do to fix it.

History of Us is currently available in digital format only: 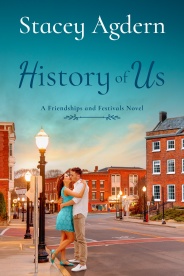 Did you know that History of Us and many titles are available digitally from Tule's own bookstore? Check it out!