The spark is still there… and brighter than ever

Cowgirl Sage Highwater had some tough times growing up: she was the only girl in a family of five, and the youngest to boot. She lost her amazing father and her closest sibling on the same day. And two years later, the boy she loved down to her soul left her behind without a word.

Growing up, Scott Parrish had been the talk of Last Stand, Texas, and never in a good way. At odds with his family, he’d constantly courted trouble. No one seemed to care or understand him, except Sage. At seventeen he’d been given a chance to make something of his life. He’d seized it, but at the expense of leaving the girl he loved. Ten years later he’s back, but not to stay.

Is a few days enough for even a determined cowgirl to convince the bad boy-turned-hero to finally give their love a chance in the hometown he’s hated for years?

“Wouldn’t blame him. I know a little about how it feels to be the one who’s different.”

Sage Highwater heard her brothers talking from where she stood in the back entry, pulling off her boots. While the Highwater ranch house was a place with floors intended to tolerate all the effects of ranch work, her boots were particularly muddy today; giving a horse a bath tended to have that result.

She had no idea what or who they were talking about, but Sean’s comment about being different didn’t give her the qualms it once had. Not anymore. Not since Elena had turned his life around simply by falling in love with him.

She was smiling to herself about that, and about how well Poke, their prime reining prospect, had done in their training session today. She was going to have to seriously consider whether to ease off on the intensive training. She didn’t want the sweet, agile dun to go sour before the big competition this summer in Oklahoma City. He was—

“Does she know yet?”

Slater again, interrupting her thoughts with that unspecific “she.” Once not so very long ago, she herself would have been the only one that could have referred to, here in this house, spoken in that manner. But now it could be Shane’s Lily, Slater’s Joey, or Sean’s Elena. And while that made her feel a slight pang at how quickly everything was changing, her delight in all her brothers’ happiness quickly erased it.

“Does which she know what?” she asked as she came into the kitchen where Shane and Slater were leaning against the kitchen island and Sean was sitting on one of the stools beside it, his boot heels hooked over the top rung so he could rest his elbows on his knees.

All three men winced and went still, which answered her question. She flipped the long, dark braid that had fallen forward as she’d shed her boots back over her shoulder. She abandoned her intention to head for the coffee they were all drinking and stopped, facing them and crossing her arms.

Slater and Sean looked at Shane. Her eldest brother sighed. Did he ever get tired, truly tired, of being the father substitute of the Highwaters? He was so good at it, and had been ever since he’d been forced to step into those huge, paternal boots at twenty-two, that she didn’t often wonder how much he minded the role he’d never had the option to turn down.

Her tall, strong brother, who wore the badge of Last Stand police chief as easily as he wore the dark gray Resistol cowboy hat that was part of his daily unofficial uniform, set down his coffee mug. And when he spoke it was in the blunt, no-nonsense tones of his job. For which Sage was glad, considering what he said.

“Peter Parrish drove his car into Buchanan Lake last night. He didn’t get out.”

Sage was proud that she barely twitched, not even inwardly, at the name. “Drunk again, I suppose?” That came out nice and even, she thought.

“Tests aren’t back yet, but it looks likely.”

The irony bit deep. “Nice way to throw away a lot of sacrifice,” she said, and that didn’t come out so calmly.

They were all silent then. Watching her. And the first words she’d heard, from Slater, played back in her head.

A shivery chill swept over her.

They were talking about Scott.

There would be a funeral, and of course both brothers would be expected. Robbie, the treasured one, who had been part of that unbreakable, impenetrable unit of four…and the useless one, the misfire, the one who had been nothing but trouble and treated as such. The one they’d tried to give away when he couldn’t fulfill the purpose he’d been conceived for.

The boy who had been the proverbial black sheep of a family already dealt a harsh blow.

The boy who had been the talk of Last Stand, and not in a good way.

The boy who had finally escaped the weight of both his reputation and his family.

The boy she had loved but who had, without a word, left her behind to do it.

The moment Scott Parrish got out of the rental car he knew he’d made a mistake.

And why are you surprised? Just because you managed to stop making them—most of the time—elsewhere?

He had the crazy thought that maybe it was this place, that there was something in the air of Last Stand, Texas, that made him lose his gyroscope. Or maybe it was simply the proximity to the only people left in the world who could still make him angry. Which was a hell of a thought, given where he’d been and what he’d done in the last ten years.

He shifted the large camouflage duffel bag on his shoulder. It wasn’t really heavy. He hadn’t brought much, because he wasn’t going to be here that long. Thank God. He’d be out of this place he hated with more heat than a Middle Eastern desert by Sunday. Even that was longer than he wanted to be here, but it would give him long enough to finish the two tasks he’d set himself. One because he owed it, the other because his brother, the innocent, blameless one, the one he’d once tried so hard to help, had begged him.

You’ve got to come, Scott.

Why? He didn’t give a damn about me when he was alive.

He’d left it at that, because he didn’t want to hurt the brother who had already had so much taken from him. Figuratively and literally. They’d never been close, he and Robbie, because they’d never had the chance. In the beginning, when he’d first been old enough to understand he’d tried, so often, to help, but had been slapped down so hard he’d quickly learned his help wasn’t needed or wanted. And always between them was the other brother whose funeral he was here for, the one who had had so many sacrifices made for him, but had thrown them all away by getting behind the wheel drunk.

The rebellious thought hit that if he was going to die anyway, maybe it would have been better if that pernicious blood cancer had taken him when he’d first been diagnosed.

And now you’re wishing death on a four-year-old? Way to give them more reason to hate you, Parrish.

He took in a deep breath and looked around. Maybe it was fitting that now, when he was at complete loose ends, he was back here in the place where his life had hit its lowest point. He wondered rather idly if it was a sign that he really had gotten past those grim days that he was able to look at the current state of his life, which most people would probably be distressed over, and think merely that he needed a little time to figure out what he was going to do.

After ten years of having to make split-second, life-changing—or life-ending—decisions, this was nothing.

He walked to the back of the rental car to stow the duffel in the trunk. A marked Last Stand police unit cruised by, slowly. He didn’t recognize the officer at the wheel. Which had to mean she’d been here less than ten years, because he guessed just about every cop in town had caught him at something, one time or other. Sometimes it amazed him, what he’d gotten away with without ending up locked up.

Because they all felt sorry for your family.

The curse of small towns. Everybody knew everything about everyone. And if they didn’t, Mr. Diaz saw to it that they soon did. Scott guessed the crusty old man probably still ran the feed store with an iron fist, maybe the city council too, in addition to his unofficial job of being the nexus of the Last Stand grapevine.

Scott unzipped the bag, grabbed the large, heavy manila envelope, then rezipped it. He slammed the trunk shut and glanced at the departing police car once more. And finally, as he’d known he would have to, let in the thought he’d been dodging.

The one person in Last Stand who had understood, who had been sad with him and for him, had been angry on his behalf. And he’d had to leave without seeing her. They’d made it clear any screwup between his hearing with the judge and when he left town voided the deal. And if there was anyone who could tempt him into screwing up it was Sage Highwater. And so he hadn’t dared to see her one last time, had resorted to the worst cop-out, leaving her a note.

It hadn’t been only that he’d been terrified any extra minute that passed might snatch this chance away from him, it was that he hadn’t dared risk the wrath of her protective big brother, the very cop who had caught him that last time. Not to mention her other two big brothers. Nobody messed with the Highwaters, and when it came to protecting their little sister, they were a united front.

Not that he blamed them. He’d been far too much trouble, and not nearly good enough for the likes of Sage Highwater. He’d known that even then. It was the only thing that had enabled him to resist her. Even at sixteen she’d been beautiful, in that wild, boundless Texas girl way, with her long, dark hair and bluebonnet blue eyes.

You’re just lucky she wasn’t the cop in that car.

He had no doubts she’d achieved her goal of wearing the Last Stand uniform. Because Sage with her mind set was a near-irresistible force. And who knew that better than him?

His jaw clenched, and determined, he shoved the memories back into their cage and focused on what he had to do. He’d become very good at that in the ten years since he’d left this place. And he wasn’t going to let coming back to Last Stand—temporarily—change that.

Lone Star Reunion is currently available in digital format only: 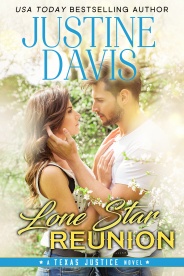 Did you know that Lone Star Reunion and many titles are available digitally from Tule's own bookstore? Check it out!