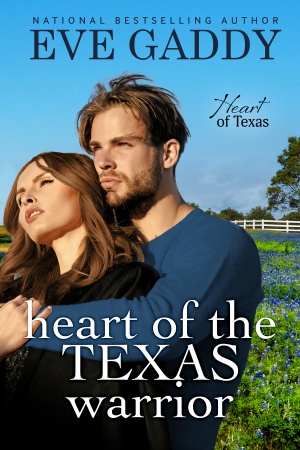 Heart of the Texas Warrior

A match made in heaven…

When strong, independent cowgirl Jessie McBride meets former Green Beret Asher Chapman while doing PT for her broken leg, the two share an instant bond. Jessie rescues and raises mustangs, while Asher established and runs a foundation that matches veterans with shelter animals. The immediate, fiery physical connection between them is even stronger.

A conflict born in hell

Unlike the girlfriend who left him after discovering the full extent of his injuries, Asher knows Jessie can handle his physical wounds. But he doesn’t believe any woman could handle the secret he can’t even face himself. Much as he wants her…and is becoming convinced he loves her, he can’t risk disclosing what haunts him.

Jessie can’t understand why Asher emotionally pulls her close only to push her away again. Can this wounded warrior learn to trust Jessie to love all of him before he drives her away for good?

Jessie McBride knew that better than anyone. But even knowing this, when Amanda Wheatridge, an old college friend, wanted to set Jessie up with a friend of hers, she’d said yes. Amanda knew her, right? She wouldn’t deliberately set her up with a bum, right?

So on a cold, dreary day in early January, Jessie had driven over to Austin to meet her date at a steak house. She’d insisted on going to Austin rather than meeting her date in Last Stand because she felt more in control that way. Besides, there was a new saddle and tack store she’d been wanting to go to and hadn’t yet had the chance. So this had seemed like the perfect opportunity. She wanted a new saddle, though she didn’t need one. But hey, since when did need have anything to do with it?

Jessie gave Amanda credit. He wasn’t a bum. Or a jerk. Dexter Jackson was a nice guy. He was cute. He was pleasant. And they’d had absolutely nothing in common. He was city; she was country. He was a partner in a high-powered law firm. Jessie raised horses and rescued mustangs. Jessie’s idea of a good time was throwing back a couple of cold ones at the Saloon in Last Stand and talking horses or sports with whoever happened to be around. Dex’s idea of fun was going to a fancy restaurant—he apologized because the steak house was casual and nothing special—or God forbid, the opera. Jessie liked loud, kicking, country music. Or barring that, soulful and sad country. She could also do country rock. Maybe even a little bluegrass. But opera? No way.

As for the steak house, the food was good, which in Jessie’s opinion trumped any amount of fancy.

Jessie wasn’t sure if she or Dex had been more bored. At least the date hadn’t been a total loss. Regardless of Dex’s reservations about the restaurant, she’d had a really good steak dinner. After driving over early, she’d enjoyed exploring the new store, although she hadn’t bought a saddle. And since Dex was no more interested in her than she was in him, she’d left shortly after dinner. No trauma, no drama.

When she started home it had been misting but now the weather had turned to a drizzle with intermittent showers of driving rain, very common in January in the Hill Country. The near-freezing drizzle made the roads treacherous but luckily not a lot of people were traveling tonight. One of Jessie’s favorite country songs came on the radio. She cranked up the volume and sang along with it, happy to be going home to her horses and her warm, comfy bed. She had the place to herself since her parents were on an open-ended anniversary trip to Australia and New Zealand.

There was a three-way intersection sign indicating that just up ahead a side road dead-ended into the two-lane highway Jessie was traveling on. Out of the corner of her eye she caught a glimpse of lights and a small moving truck going fast, heading straight for the highway. There’s no way he can stop, not at that speed on these roads. She slowed, put steady pressure on her brakes, but she knew she couldn’t stop without skidding or spinning. She had to hope the truck could stop or at least slow down before it hit her. When it was clear that wasn’t going to happen, she stomped on her brakes, skidded and—

The truck slammed into her. The noise was horrendous, a screeching and crumpling of metal. Her truck spun out, her air bag deployed, and a split second later she felt a pain so intense she blacked out.

Jessie opened her eyes and tried to think where she was. Oh, God, what happened? I hurt all over.

Still groggy, she tried to move but couldn’t. Her leg was stuck between her seat and the crumpled door of her truck, and her airbag was in the way. Glass shards from the broken side window were everywhere. She tried to wipe them off her face but it hurt too much so she quit.

She looked out the window and saw a van with its front end smashed, sitting in the middle of the highway. A wreck. She’d been in a wreck. The pain was agonizing. She heard someone yelling but couldn’t understand it, so she blocked it out, concentrating on getting herself out of the truck. She tried to turn her upper body but it hurt so much she couldn’t. She was stuck like glue. She put her hands on her leg, thinking she might pull free, but her hands slipped. Wet. Sticky. Blood, she thought, looking at her hand by the light of her dashboard. Fabulous, I could be bleeding to death.

“Help.” No one answered. Get me out of here! The world tilted and faded to black.

Asher Chapman was no more than a minute or so away when he saw—and heard—the wreck. A small do-it-yourself moving van broadsided a pickup. The pickup spun and landed in a ditch but it didn’t roll. It sat upright, if severely mangled. The van was in the middle of the highway, its front end smashed. He pulled up as close to the wreck as he could without disturbing the scene and parked. “Stay, Maggie,” he told the golden retriever in the seat beside him. His dog didn’t need to be poking around with all that glass and metal scattered everywhere. He went to see what he could do.

The moving van’s door was open. There was a man talking on his phone, gesticulating wildly.

“Are you all right?” he shouted, heading for the pickup. From what Asher could see he looked okay but you never knew.

“Yes, yes, I’m not hurt.” He turned away, back to the phone and continuing to yammer.

“Have you checked the other driver?”

Ignoring him for the moment, Asher went to the mangled pickup and reached through the broken window to put his fingers on the driver’s neck. She had a pulse, thank God. Fast and thready, but she was definitely alive. He turned his head and shouted at the other driver, “She’s alive but we need EMS here ASAP.”

“I don’t know where we are! Some damn highway out in the middle of nowhere!”

Great. The bozo didn’t even know where he was. “Give me the phone.” He had to repeat himself three times but the man finally brought him the phone. He quickly told the dispatcher their location. “Two people involved in the accident. One seems okay, he’s walking around but the other is unconscious and possibly trapped in her truck.”

After ending the call, he tossed the phone to the man, who seemed to be in shock if being rooted to the spot was any indication. But he was at least walking around. This poor woman was still unconscious. He tried to open the driver’s door but couldn’t budge it. He went around and opened the other door and crawled inside.

Asher shoved the airbag closest to him out of the way to get to the driver. He pulled a pocketknife out of his jeans. He felt for her pulse again, relieved to find she was still alive. “That’s one good thing,” he muttered. If the state of the truck was any indication, she could be seriously hurt. Not to mention she was still unconscious. He could see her in the indirect light from his headlights, though not well, partly due to the blood covering her face. “Ma’am, can you hear me?”

She didn’t answer so he cut through the airbag closest to him and yanked it all the way out of the way. What he saw wasn’t good. Her leg was wedged between her seat and the door. She was bleeding from a variety of places, including her leg. He’d bet anything it was broken. He took off his jacket and yanked his sweatshirt over his head to try to staunch the blood flow from her leg.

She cried out when he put pressure on it, which he took as a good sign. After having served in Iraq and Afghanistan he knew a bit about first aid.

Her eyes fluttered open and she stared at him in confusion. “What—where—what’s wrong?”

“You’ve been in a car accident. Don’t try to move. EMS will be here shortly.” He hoped. “They’ll take care of you.”

“Don’t try,” he repeated. “You’re going to need help getting out.” He was still holding pressure on her leg.

“I think it might be broken. Don’t try to move,” he repeated. He thought about seeing if he could get her out, but he didn’t want to make things worse by moving her. Best to let EMS take care of it. Besides, he was fairly sure they would need tools to pry her out of the wreck. And possibly a tourniquet on her leg.

She put her hand on her leg and moaned. “Oh, shit…I’m bleeding. What are you doing?”

“Holding pressure on your leg. It’s wedged in between your seat and the truck door, so you’re not going anywhere until EMS gets here.”

“I can do that,” she said haltingly, putting her hands on his blood-soaked sweatshirt.

“No you can’t. Be still. Help is coming. They’ll get you out of there and take care of you.”

She was quiet a moment. “Did you—A truck hit me. Was it you?”

“No. I was a few hundred feet away when it happened. The other driver’s okay.” Not hurt. No, only the driver of the truck he ran into was hurt. The man obviously didn’t have a freaking clue how to drive the van. Or where the hell he was, for that matter, Asher thought grimly.

True. But at least the guy hadn’t run. Although, his truck might be messed up enough that he couldn’t have if he’d wanted to.

Heart of the Texas Warrior is currently available in digital format only: 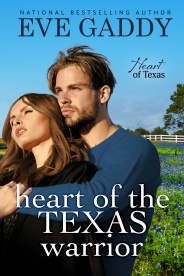 Did you know that Heart of the Texas Warrior and many titles are available digitally from Tule's own bookstore? Check it out!