Could the best man be her best option?

The last person Meredith Turner expects to see at her best friend’s wedding rehearsal dinner is the guy she had a one night stand with. What’s worse, Lincoln Forrest is the best man and as maid of honor, her partner. To add insult to injury, she has to leave the rehearsal dinner early, and Lincoln is the one to help her with a deeply personal problem. The aftermath of that night brings big changes for them both.

Lincoln Forrest has helped his best friend meet the woman of his dreams, but recently he’s made a series of bad decisions, the biggest being leaving his career with the Army. Now the former K-9 handler is looking for a new career and trying to get his life back on track. Helping Meredith in her time of need connects her to him more than he expected. On a mission to right the wrong he created, Linc will do whatever is needed. But when the attraction that first drew them together flares to life again, will the obstacles between them be too much to overcome? Or has the matchmaker met his match?

Friday night and this crowded hotel bar in San Diego was hopping. After living in a small, Guatemalan town for a year, where the loudest noise she’d experienced were the screams of howler monkeys, Meredith Turner paused to adjust to the volume.

This is exactly what I need.

The need to immerse herself in a group of people who didn’t know her or expect her to be the life of the party filled her. She was in town only for the night before her flight back to San Antonio in the morning. Back to a different life than the one she’d thought she’d return to.

Tonight, though, she was going to have one or two drinks. Give herself a nice buzz before returning to her room and sleeping on a bed where the mattress was thicker than three inches and wasn’t surrounded by a mosquito net.

There was one free stool at the bar. Perfect. Drinking there was far better than standing by herself in a corner. After she settled herself in the chair, she lifted her hand to catch the bartender’s eye.

“What can I get you?” he asked as he placed a napkin in front of her.

The bartender winked and smiled big. “One cosmo, coming right up.”

He turned and began to grab the bottles to make her drink.

Meredith turned to the man on the stool next to her. His eyes crinkled in the corner and his lips were stretched into a wide, welcoming smile. An unexpected spark of attraction flared low in her belly. For half a heartbeat, she was tempted to ignore him and the feeling, but after being dumped two days before she’d flown back to Texas, it was nice to receive a little attention.

Swiveling around, her knees brushed against his. The initial flare in her stomach grew a bit brighter.

Well now, this is unexpected.

“Your drink. Didn’t Carrie and all her girlfriends drink cosmos?”

Meredith leaned forward, intrigued that this good-looking stranger was engaging with her and that he knew all about a once-popular cable show she adored. “Are you telling me that you watched the show?”

The barman slid the drink in front of her, and before she could grab her wallet, the stranger seated next to her placed his card on the counter. “Allow me to get this for you.”

“Thanks, that’s very kind of you. I’m Meredith, by the way.” She held out her hand. He grasped it and immediately a fissure of electricity arced up her arm, intensifying the already large spark of attraction.

What the hell was happening here? She hadn’t experienced anything like this whenever Mark touched her. She had to be imagining it.

The buzzing in her ears muffled whatever he was saying. Was it his name? She thought she’d made out an L and a K in it. “Luke? Good to meet you too.”

He didn’t say anything and she let out a little breath. Her flirting game was a little off, what with her long-term relationship with Mark and then living overseas for almost a year.

But come tomorrow, a new chapter of her life would begin. Why not close the old one off with a bit of fun?

Meredith took a fortifying sip of her drink and looked up at Luke from beneath her lashes. “So what brings you to San Diego?”

He shifted his stool a little closer to hers, again bringing their legs in contact. “I’m about to embark on a new job. I’m looking forward to new experiences.”

“I’m about to join a new security firm. What about you? What are you doing here?”

“Just here for the night.” And if he asked where home was, she had no plans to tell him.

She might have been out of the dating game for a while, but she wasn’t stupid. There were some things one didn’t share with a person they’d just met.

Meredith trailed a finger around the rim of her glass, noticing the way Luke’s gaze tracked the movement. “You know, you never did tell me if you were a big Sex and the City fan.”

He lifted his gaze from her finger. In the muted light of the bar, his eyes looked silver. His tongue darted out and swiped across his lower lip. Her stomach clenched.

Okay, the way she was reacting to every single action was ridiculous. Yeah, it had been nearly a year since she’d slept with a guy, but surely she wasn’t so desperate that any attention from a guy would send her over the edge. Was she?

“My sister made me watch it with her.”

He laughed and, once again, his eyes crinkled in the corners. Damn, he really was good-looking. “You asked me about watching Carrie and her friends. My sister made me watch the show with her.”

“Oh, right. That makes sense then.”

Luke closed the gap between them, crooking his finger. Her heart fluttered in her chest, but she couldn’t stop herself from leaning forward.

“Do you think I can still keep my man card even though I watched a chick show?” he asked seductively, his lips brushing against her ear.

In the middle of a loud, noisy hotel bar, the laughter and loud music faded to the background as their gazes locked together. “Yes. Yes you can.” She said and threw caution to the wind. She’d never done anything in her life like what she was about to do.

One-night stands had never appealed to her. But this man was tempting her to take the plunge. The fact that someone found her attractive was good for her ego after the way Mark confessed to cheating when he ended their relationship, for the second time. She should’ve stayed broken up with him and ignored the email she’d received the day she’d arrived in Guatemala. But she wanted what Isabella and Ethan had, so she’d caved and had taken him back. What a mistake that had been. She hadn’t breathed a word of it to Iz, though. Her best friend would’ve taken her to task for not thinking straight. Just like she wouldn’t say anything about what she was about to do.

She closed the gap and pressed her lips against his. For the first time in her life, Meredith was going to take what she wanted, and tonight she wanted this man.

The Matchmaker’s Match is available in the following formats: 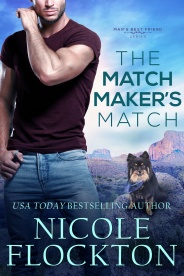 Did you know that The Matchmaker’s Match and many titles are available digitally from Tule's own bookstore? Check it out!