Be careful what you wish for-

Meg Zabrinski, successful scientist, well-known environmental advocate, and tenured professor is as independent as they come in Montana. She doesn’t need a man in her life, but she does want to have a baby. She retreats to her isolated mountain cabin to write and ponder her future when Henry Firestone–an old rival and former secret crush from her distant past–drops out of the sky on Christmas Eve with three young children and a baby. Meg doesn’t believe in cosmic signs, but even she realizes she’d be crazy not to consider all her options.

The sparks that have always smoldered between them ignite a mutual passion, but when Henry Firestone makes it clear he’s done having children, Meg is forced to accept that falling in love with Henry and his ready-made family would require her to abandon her dream.  Can this “Lone Wolf” assimilate into a new pack, or is this Big Sky Maverick meant to be alone?

JJ curled in a ball in the co-pilot seat, listening to the squeaks and moans and popping sounds as the helicopter settled into its death.

A lot noisier than Mom.

Her last sounds–the one time he snuck in to see her at the end–were low, ugly gasps that came from deep in her chest, like a trapped animal trying to crawl out. He would have done anything to make it stop, but everyone–the doctors, Grandpa, even, God–had given up trying to help her.

A few hours later she died.

Mom’s death wasn’t his fault, but this was.

He made a fist and pressed it to his gut to keep from throwing up.

He’d nearly killed them all.

They’d crash landed in the middle of nowhere in a freaking blizzard. They’d probably freeze to death before help arrived.

He leaned sideways to look into the back seat.

Bravo was strapped in his seat, crying. His nose a snotty mess, like usual. The kid cried more often than Annie, who was a girl.

JJ got to his knees so he could check on Mystic. He’d die if Mystic was dead. His mother gave her life for that baby. Mom had refused any sort of cancer treatment for fear it would hurt her baby. Mystic River Landry. Mom had the name picked out before the doctor confirmed the baby was a girl.

If Mystic died so soon after Mom, JJ would be glad to freeze to death. At least he wouldn’t have to live with that guilt, too.

“You okay, buddy?” Hank asked in the pilot’s seat beside him. Hank. To the little ones he was Grandpa, but JJ used his given name because that’s how Mom always addressed her father.

JJ swallowed hard to keep from crying. He had to man up.

Be brave, my love. I’m counting on you to keep it together for the sake of the little ones, Mom said before she got bad.

“Yeah. I’m okay. But, your bird…” Hank always called the helicopter a bird. The thing even had a name, but JJ couldn’t remember it. “I…I’m sorry.”

Hank, who appeared to be concentrating hard on assessing their situation, gave JJ a questioning look. “Sorry for wha…? No,” his grandfather said sternly, his deep voice going hard and serious. “This is not your fault, JJ. Something mechanical gave out. I heard a pop right before the rotor went wonky.

“Could have been from the cold, the snow, structural fatigue, who knows? But whatever the cause, you are not to blame. Are we clear on that?”

JJ wanted to believe him, but JJ had been the one holding the stick when the popping noise happened. Hank had given him the controls so he could reach behind them to keep Mystic from choking to death. Annie and Bravo had been crying so loudly JJ thought his ears would bleed. He’d held the stick with all his might and tried to pretend the whole thing was a video game.

But what happened next wasn’t pretend. The helicopter lurched and bucked like a living beast. His hold slipped. The bird tilted sideways–only for a second until he got it straightened out again–but that’s when the bad sound happened. The helo cried out as if he’d shot it. The moaning and groaning and vibration seemed to move through his body as they fell.

He’d never been more scared in his entire life. He’d prayed to God, his dead mother and the dead father he barely remembered. He prayed hard. And, it looked like his prayers were answered.

They were still alive, right?

A gust of wind hit the helicopter–Betsy, he thought, that was the bird’s name–rocking it enough to release a fine white mist of snow inside their shelter.

He tried to see into the blackness beyond the frosty plastic window, but there was nothing. Just a black snowy void.

His prayers might have saved them, but for how long?

Montana Maverick is currently available in digital format only: 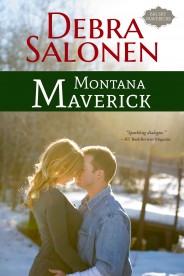 Did you know that Montana Maverick and many titles are available digitally from Tule's own bookstore? Check it out!