She’s moved home, but can she move on?

One night with professional bull rider Trent Campbell had been everything that Kelly Sullivan had fantasized about. Unfortunately, it cost her everything. When she became pregnant, her father threw her out because she wouldn’t tell him the baby’s father was his rodeo hero—the hero who ghosted her when she tried so many times to tell him about their daughter.

Trent Campbell never forgot the best night of his life. It was what kept him going when a 2,000-lbs bull ended his career and almost his life. Throughout his long recovery, thinking of Kelly and wishing he still had his stolen phone so he could contact her, were what got him through the tough days—that, and his bull-headed stubbornness that he’d not only walk again, he’d ride.

When Kelly returns to Last Stand, Texas, in a last-ditch effort to keep her family from selling the Three Sisters Ranch, she has a plan to make her father proud of her again by turning part of the land into a portrait studio location. Her father, however, has already temporary leased Trent some land for a rodeo school. Kelly and Trent still have the same explosive chemistry, but now the stakes are higher. If she lets Trent into her life, it won’t only be her heart he breaks this time if he leaves, it will be their daughter’s.

Kelly Sullivan knew she was nitpicking about what filter to use for the engagement photo she was processing. The bride wouldn’t be able to tell the difference between the gradients, but fussing over the nearly perfect picture kept Kelly from thinking about the message her father had left on her phone.

Come home one last time. We’re selling the ranch. We can’t keep up with the bills.

It was amazing that he’d even tried to call her. Usually, he just had her mom do it. And for him to admit a failing? Well, that worried her. Rule number one: Frank Sullivan was never wrong. And if he ever was? See rule number one.

Kelly couldn’t stop herself from analyzing his message, looking for hidden meanings in his tone and the things he didn’t say. It was a self-defense mechanism she’d used ever since he tossed her out on her pregnant ass because she wouldn’t tell him who the father of her baby was. While that was five years ago, their tentative truce was fraught with emotions neither one of them wanted to deal with. The tightrope they walked could snap, and one or the other of them could say or do something that couldn’t be repaired.

“We can’t keep up with the bills” was a weakness. And the only thing her father loathed more than weakness, was giving up.

“We’re selling the ranch.” Where would they go? Both her mother and her father had lived in Last Stand, Texas all their lives. Kelly couldn’t imagine them wanting to live anywhere else.

“Come home one last time.” She was already home. The Three Sisters Ranch ceased to become her home when he’d thrown her out. They hadn’t spoken for two years after that. Home wasn’t a vast five-thousand-acre ranch with dusty cows and hauntingly beautiful sunsets. It was an apartment in a thriving city, where people didn’t know your business and couldn’t care less if you were a single mother, or had had a child out of wedlock.

Her five-year-old daughter, Alissa went to preschool here, had friends here. Kelly stayed away from Last Stand, Texas, to avoid the unwed mother gaze her father would bestow on her every day of her life. And even after his heart attack, when they’d had a grudging reconciliation, she’d still only been back for holidays and special occasions. But even though Kelly tried to avoid how she felt about the place and the memories it conjured up, the truth couldn’t be ignored. The Three Sisters Ranch was still a part of her. It was a part of them all. And even though she could hail a cab like a native New Yorker, one never truly left Last Stand.

Her sisters were equally shocked by their messages. He must have timed it so he could talk to all of their answering machines instead of them. Janice was scrambling to rearrange her schedule. Emily was on her way back from Ethiopia, where she’d been living once her term in the Peace Corps had expired. They had FaceTimed with their mom, though, and while they all had different ideas on how to save the ranch, the one thing they could all agree on was they were going to try their damned best not to sell.

Their mother, Sarah, had been glad that her daughters were coming home and that they were willing to try and find ways to make the ranch profitable again. No word from her father, though, after the original message, which was typical. Frank Sullivan was like a grenade. He came in and exploded everywhere and then disappeared, leaving everyone to pick up the shattered pieces.

“When’s your flight?” her aunt Candace said, bringing Kelly a cup of coffee and placing it on her desk. Candace had left Texas as soon as she graduated high school and had lived in Manhattan ever since. She was a sought-after wedding planner, and had taken Kelly in when she could no longer bear the looks of shame her parents hadn’t tried to hide.

“I haven’t booked it yet.” Kelly moved on from the engagement photo to the school pictures she needed to get out to the parents this week. She’d been lucky enough to win the bid on the Academy of Arts Elementary School yearly portraits and she wanted to impress the heck out of them so she’d be invited back next year. Still, in the back of her mind, she was picturing the spring bluebonnet flowers that decorated the ranch with a royal blue so rich it uplifted your heart. There had to be schools in Texas that were looking for photographers.

“There’s nothing you can do from here, that you can’t do from there.”

Blinking out of her daydreams, Kelly nodded. It was true. Have laptop, will travel. “I hate to drag Alissa out of summer school.”

“It’s pre-kindergarten. It’s not like she’s going to miss out on a whole lot. And doesn’t that fancy-pants school encourage nontraditional learning? You can learn a lot on a cattle ranch.”

“Especially if you listen to the hands. Talk about a vocabulary lesson I don’t want my daughter repeating back to her city-slicker friends.” Kelly grinned, playing up her Texas drawl for effect.

Candace sniffed. “Your parents need Alissa right now. She’s the only good thing they have—aside from you three girls, of course.”

Alissa was the glue that held her family together, and it was a fragile bond. When Kelly’s daughter was born, her mother had called and tried to re-establish their relationship. Kelly had needed her mother, even though she hadn’t stuck up for her when her father had thrown her out, and she gratefully took the opportunity to reconnect with her. But her father had remained stoically firm in his ultimatum…until a few years later, when he lay recovering in his hospital bed. Then, he demanded to meet his only grandchild. Her sisters had always made it a point to call every week to see how Kelly and Alissa were doing. Alissa was the best thing that had happened to Kelly, even if she had turned her life upside down. But babies were supposed to do that, right?

The Cowboy’s Daughter is available in the following formats: 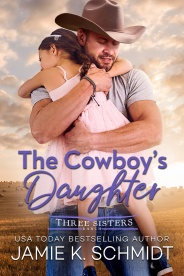 Did you know that The Cowboy’s Daughter and many titles are available digitally from Tule's own bookstore? Check it out!