Infuriating, arrogant, demanding. And disturbingly sexy. Those were the first thoughts Frankie had about Greek millionaire and volunteer firefighter Nik Kontarinis, but she was not going to fall prey to his seduction plans. She was on the island of Kathos to lick her wounds and figure out her next steps, not to become another notch on Nik’s bedpost.

A villa restoration project presents the perfect opportunity for Frankie to reboot her business and her life. There is only one problem–she needs a business partner. When Nik offers her an opportunity too good to pass up, Frankie is tempted to accept. Except that Nik has set his terms and there are definitely strings attached.

Will Frankie give in to temptation and play?

She leaned in closer to him. He could feel the warmth of her body against his, her silky, platinum-blonde hair trailing over where the skin of his arm was bared beneath the rolled-up sleeve of his shirt. See the deep, beguiling valley between her generous tanned breasts. “We could go somewhere quieter,” she suggested huskily. “Or are you waiting for someone?” Her eyes flicked to the tumbler of Metaxa twelve-star brandy sitting undrunk on the opposite side of the round table. Marco’s glass.

“No,” Nik replied. “He’s not coming.” In all likelihood, Marco never would come. But that didn’t stop Nik and his adoptive brothers from ordering a drink for their absent younger sibling every time they got together. Gone, but definitely not forgotten.

Nik drained the last of his own brandy and turned to his companion. She’d come over and introduced herself as Elsa, from Sweden, just after Sergei and Dimitri had left, and had wasted no time in letting him know she was available, if he wanted. But he didn’t want. Not tonight. Even though Elsa was gorgeous, and he was no stranger to the occasional hook-up or brief affair with female tourists vacationing here on the island of Kathos.

He wasn’t sure why. Friday night after a heavy week spent commuting between his two bars and nightclub? Maybe. Because he was on call this weekend in Agia Kalamaros as a volunteer captain for the local fire service? Perhaps. Or the growing feeling of discontent with the lifestyle he’d pursued for the last ten years, where pleasure-seeking had filled his downtime, and, every now and then, a vacationing woman his bed? Quite possibly.

When Sergei and Dimitri had been here at Artemis AK earlier in the evening to have a couple of drinks with him, they’d ribbed him about Elsa, who’d been sitting alone and throwing him sultry glances, and his uncustomary lack of appetite for what she was clearly offering.

“Hey, bol’shoy brat,” Sergei had mocked his older brother, using the Russian that had been his first language during his earliest years in a Moscow slum. “What’s going on? There’s a beautiful girl over there who’s mega-hot and ready to trot, and you’re just not interested? Are you feeling unwell?”

Nik had rolled his eyes at Sergei’s choice of description of Elsa’s obvious keenness. “Mega-hot and ready to trot? Where did you borrow that from? The lyrics of one of those dance tunes you’re so good at churning out for the clubbers of southern Europe?”

“Dance anthems, brat, anthems. And I don’t churn, I make music. Music you’re quite happy to have played in your club and bars.”

Nik had raised his glass in acknowledgement of Sergei’s correct observation. He did play the tracks Sergei produced in Athens, which regularly topped the charts with their unique mix of Greek, Russian, and electro-dance influences.

“Could it be you’re finally seeing the error of your ways?” Dimitri had asked more seriously. “Realising you’ll never meet a woman in a bar or club, or on the beach, who you can settle down with?”

Nik had made an exaggerated show of patting his middle brother’s shoulder. Dimitri, who, like him, was Greek by birth, was the most intense of the three of them. “Just like you’ve never met the woman you want to settle down with anywhere, Dimitrios?”

Dimitri had smiled and held up his palms in good-natured defeat. “Kleidi. Touché. All three of us know a good woman is hard to find. But there are women out there somewhere, for you, me, and Sergei. You just have to believe.”

“Ah. Believing is where you and I part company,” Nik had admitted.

Elsa sliding her fingers beneath the front of his partly open shirt jerked his attention back to the present. “So we could go somewhere else and get to know one another…better?” she breathed into his ear, then captured its lobe between her teeth and gently nibbled.

Nik sat still, feeling less than aroused, and more like irritated. He had to stop himself from pushing her away. What the hell was wrong with him? Last summer, the combination of her Nordic blondeness and blatant come-on would have had him scooping her up and taking her to his place to have full enjoyment of her spectacular body. But not now. His usual sexual energy had not returned with the new holiday season. But there was still time—this was the first weekend in June. Maybe he just needed to catch up on his sleep, let the temperature rise a little further, and the beaches fill up a little more.

Elsa moving her hand from his chest down to rub at the crotch of his trousers galvanised him into pulling away from her and standing up. She looked up at him, her ice-blue eyes wide with non-comprehension.

“Sorry, agapimeni mou. Not tonight.” He grabbed his jacket from the back of his chair and moved to leave, briefly stopping to take Marco’s glass of Metaxa from the table, raise it in salute to the still-uncomprehending Elsa, and swallow its contents in one gulp. Then he left the building, striding out onto Agia Kalamaros’s waterfront, which faced onto the Ionian Sea. A fresh breeze cooled him, bringing with it clarity of thought. He turned to look back at the neon-lit sign of Artemis AK. He was proud of his business empire; financially and materially, life was good. He also loved volunteering for the fire station here. But women? As he’d told Dimitri earlier, he wasn’t a believer—because he wasn’t—in his own ability to commit. The hard, honest truth was, people he’d loved had been taken from him, and that had marked him. Whenever there was a prospect of a lasting relationship, that deep thing within him kicked in, and he made sure to leave before he was left.

He turned back to look out to sea. He stared at the moon rising out over the adjoining island of Lekopolos, casting silvery fingers across the water. Definitely, he was jaded when it came to his love life. Easy sex handed to him on a hot plate no longer excited him. Either he lived as a monk, or he needed more of a challenge…

The Greek’s Bedroom Bargain is available in the following formats: 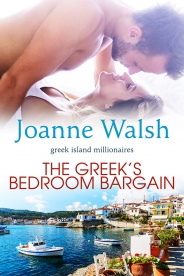 Did you know that The Greek’s Bedroom Bargain and many titles are available digitally from Tule's own bookstore? Check it out!