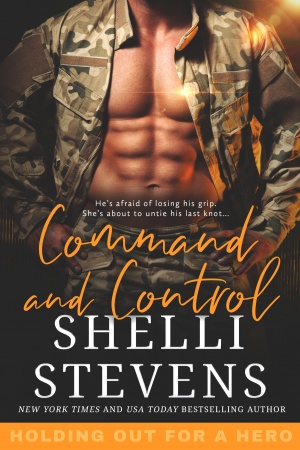 He’s afraid of losing his grip. She’s about to untie his last knot…

Megan Asher may have a thriving legal career, looks and self-confidence to spare, but they mean little without the love of her life. Trevor’s returned from Afghanistan a haunted man, emotionally distant and unwilling to connect—except in bed. Then even that fragile thread snaps. Brokenhearted, she is forced to call off their wedding and, after a few months’ separation, try to move on.

With every aspect of his life spinning out of his once-legendary control, Trevor Wyatt convinces himself that Megan is better off—and safer—as far from him as possible…until he comes home for his brother’s wedding to discover Megan is dating. Realizing what he’s thrown away, Trevor vows to breach the fortress Megan’s built around her heart. They clash in a cataclysm of rekindled passion that unleashes the very demons he’s sought to leash.

Shaken but determined, Megan takes the ultimate risk and slips past Trevor’s defenses to hand him control in the one place she can—the bedroom. She prays her seduction will be the first step to heal her hero and their love.

Trevor Wyatt froze, one foot already outside the coffee shop, his mind echoing with what he’d just overheard.

Megan Asher was getting married.

His chest tightened, almost crushing his ability to breathe as the blood pounded harder in his veins. He moved out of the entryway and back into the store, stepping to the creamer station to slowly add three packs of sugar he didn’t even want to his coffee.

“Bev, I swear to God I saw it with my own two eyes,” Lisa, Wyattsville’s most notorious gossip, proclaimed. “Not even five minutes ago, Megan was picking out wedding cakes down at Kate’s Cakes.”

Five minutes ago? That meant she might still be there. Trevor didn’t need to hear another word, just strode out the door—coffee forgotten on the counter—and hurried toward Kate’s shop. The fact that he needed to be at his parents’ house in twenty minutes had just slipped on his priority list.

His fists clenched and his head pounded with sudden tension. How the hell was it even remotely possible that Megan was getting married? Damn it, he hadn’t even realized she was seeing anyone.

Maybe if you came back from JBLM on the weekends as much as you used to, you’d have figured it out.

But leaving the base and coming back to Wyattsville meant facing Megan and the fact that he’d failed her. Failed them. Coming back drove a hot poker into another emotional wound he couldn’t seem to heal, that’d he’d begun to realize would probably never heal. He was a fucking mess. Megan didn’t deserve that. He’d kept telling himself that until he’d finally driven her away.

Right into someone else’s arms, it seemed.

“Hey, Trevor, didn’t know you were back in town!” one of his friends called out as they passed each other on the sidewalk.

Trevor nodded, unable to form a response to his friend. With each brisk stride he took, familiar faces rushed to move out of his way, their eyes widening, even as more people called out a greeting or welcomed him back.

An image of Megan flitted through his head. The same vision that usually came to mind when he let himself really think about her. An image from two summers ago. She was lying in the grass over on Evergreen Hill, her red hair sprawled out with the wildflowers as she smiled up at him through her lashes. Her blue eyes twinkled with amusement and intimacy, her breasts rising gently with each seductive laugh she made.

Frustration seeped through his pores and into his blood until he let out a snarl of frustration as he spotted the shop with the pink overhang that was supposed to resemble frosting. The shop Megan was hopefully still in.

He shoved open the door to the shop and strode inside, his gaze sweeping the small confines until he found her.

She stood by the display case full of cakes, dressed in a skirt suit that hugged her curves, laughing as she spoke to Kate, the owner of the shop. But the moment he entered the store, her laughter had died, and her lush mouth had parted just enough to show her surprise, even as her gaze remained unreadable. She was always so damn good at that. Keeping her emotions under control. They were the same in that way.

Longing slammed into his chest, hitting him like a two-by-four, clenching his heart with almost physical pain and stirring his blood with hot arousal that had become somewhat a novelty.

Megan marrying someone else?

Command and Control is currently available in digital format only: 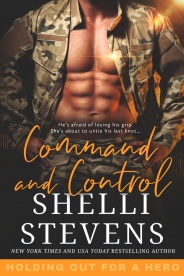 Did you know that Command and Control and many titles are available digitally from Tule's own bookstore? Check it out!