He’s the man she left behind, but never forgot…

Laurel Moore might have had to leave her prized job as an assistant chef in one of NYC’s swankiest restaurants to take care of her brother and mother after her father’s death, but she’s not giving up on her dream. Nope. She’s going to turn her father’s debt-ridden, greasy spoon bar and restaurant into a destination gastropub that will bring life back to her small, struggling town. Laurel faces resistance on all sides, but it’s running into her first love, reformed bad boy Jonah Gardiner, that really throws her off her stride. Worse, he’s more tempting than ever.

Spurred on by Laurel’s rejection a decade ago, Jonah cleaned up his act and became an academic and psychologist, who helps everyone understand their feelings except himself. He can think of a million reasons why he and Laurel need to stay at arms’ length, but when she shares her new recipes with him, it seems like foreplay. And that’s just the beginning…

Can he and Laurel seize a second chance or will she destroy the peace he’s worked so hard for?

“Laurel, stop!” a deep voice shouted from above her.

Laurel Moore jumped about a foot, dropped one of the catering-size tomato cans in her arms on her toe, yelped, and looked up. The can rolled into the road, where a bus drove exactly where she’d been about to run. Its left rear tire squashed the can like a juicy tick, sending sauce flying everywhere, landing on her white chef’s scrubs and oozing into her working clogs.

“Shit!” she shouted, distracted from trying to find the source of the voice. She looked like a crime scene from the waist down. Glancing up, she saw people in the back of the bus, gazing at her as though she were an interesting stop on a tour.

“Hold on!” came the voice again, turning her attention to the building across the street. Laurel had grown up across from this building. She’d thought she knew everything about it, from the real estate office and café on the corner to the uniform set of windows and old-timey fake roofline above. But she’d never really considered who lived there.

She couldn’t see more than a shadow beyond the window screen. All she could do was back up from the sidewalk into the alley, so she wouldn’t be run over by commuters heading to the train station two blocks over—and who were looking at her with curious expressions, damn them—and wait, her last precious can of tomatoes still pressed to her breast.

The door sandwiched between the realtor’s office and the lawyer’s opened, and a tall, slim man with dark red hair and a short beard loped out and jaywalked across the street to her. He was wearing a button-down blue check shirt with the sleeves rolled up, dark khakis, and suede boots. As he got closer, she saw tattoos on his exposed forearms and snaking out of the collar of his shirt.

Yep. If the hair and beard didn’t brand him, those tattoos sure did. Jonah Gardiner. Town bad boy. The one her mother had always—and uselessly—warned her about. “That Jonah Gardiner,” she’d told Laurel in high school. “You stay away from him. He’s no good. Getting into everything bad, he is. He’ll be in jail or dead from drugs before he’s twenty-five, mark my words.”

Laurel, being a good girl, had stayed away from him in high school. In college, however…

All she could do was stare at him as he joined her in the alley. What was he doing across the street from her father’s bar?

“Yes!” she squeaked. Because she certainly didn’t want Jonah Gardiner, of all people, to witness any more of her stupidity than he already had.

Jonah raised an eyebrow. “Sure?” He looked behind her. Laurel belatedly remembered the laden SUV, back hatch and doors open, crooked piles of food filling the inside. Her feet squelched softly in her shoes.

Well, she’d had to start saving somewhere. Her beloved, flawed father had died and left her with all the bar’s accounts in arrears and no one but her to fix them. The delivery charges from the local wholesaler had seemed like a good place to start.

She was strong, wasn’t she? She regularly hauled and butchered entire sides of beef, didn’t she? Her hands could knead enough dough for a whole restaurant, and she’d spent so many hours on her feet as a chef that sitting down was an anomaly. A carload of cans should have been a piece of—well, a can of—cake. Or something.

Yet somehow, the cans hadn’t known this. The cardboard had buckled as she pulled one case out of the teetering pile on the passenger seat. Every one of the eight cans had slithered out of her grasp and onto the ground, making popping sounds as they landed, then rolled away.

Laurel had managed to save two of them by clutching them painfully against her chest. Two rolled under the truck—she considered them lost. But she was damned if she was going to lose the rest. Sauce was money, and apparently the patrons of Sullivan’s Bar and Grill—Grill? That was a laugh; nothing in that restaurant had been anything other than reheated or fried in years—needed their mozzarella sticks to come with sauce, or there’d be an uprising.

So, she’d run for the cans. Awkwardly, because of the two she still clutched to her chest.

And now Jonah Gardiner had seen her screwing up. Just great.

“It’s fine!” she said as breezily as she could while dripping. “My brother will be here any minute to help.”

Too late, she remembered that Jonah knew Brett. Possibly better than she did. Jonah would know that Brett was more likely to be sleeping off a hangover right now, not showing up on time to help his sister run the bar.

Forget Me is available in the following formats: 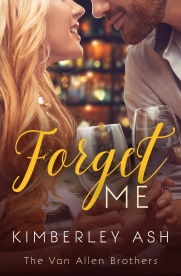 Did you know that Forget Me and many titles are available digitally from Tule's own bookstore? Check it out!