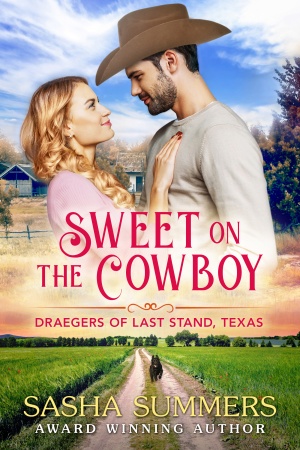 Sweet on the Cowboy

If you can’t stand the heat…

Lam Draeger’s deep wounds from the death of his young son and his
subsequent divorce were still healing when he was saddled with his
running his family’s cattle and rodeo stock ranch and the
responsibility of raising his siblings and keeping them out of
trouble. His every moment is devoted to running the ranch and business smoothly. He’s had no time to mourn his many losses or try to rebuild his personal life. And romance? Out of the question, no matter how sweet the temptation.

…don’t fall in love in the kitchen

Single mom Gwen Hobbs is right back where she swore she’d never be – cooking in the kitchen at the Draeger ranch just like her mom before her. But since her fiancé and the father of her daughters walked out on her, taking all their savings with him, she’s forced to be practical. So she vows to ignore the attraction that hums between her and Lam and to stop dreaming of becoming a chef.

But when Lam suggests she audition for a cooking competition, Gwen realizes that not all her dreams are out of reach, and her growing hopes extend far beyond a professionally tricked-out kitchen.

Lam rolled his head, stretching muscles knotted from long hours of work and stress. His boots echoed off the polished wood floor leading to the kitchen. No need to tiptoe. Besides he and Jax, it was his mother and Marta. His mother had started taking sleeping pills after his father’s passing—said she couldn’t sleep without him “sawing logs” beside her—and Marta’s room was at the other end of the house.

The whereabouts of his siblings? Not home and not his problem. They were adults, when they chose to act like it. According to his sister, Tabitha, he was the only Draeger who didn’t have a social life. But all her poking and prodding and teasing about going out, having fun—even finding a hobby—sounded like work. And, dammit, he was already doing that from sun up to sun down running the ranch. Not that he minded too much. He loved this land, his home, with every fiber of his being. As far as he was concerned, there was nothing prettier than a sunrise or a sunset in the Texas Hill Country.

Jax’s ears perked up and he whimpered once, earning Lam’s attention.

“What’s up?” he asked his shadow. Jax might be a working Australian Cattle Dog, but he was Lam’s favorite companion. Maybe it was wrong to prefer a four-legged companion, but Jax was just about the only living thing that didn’t expect him to shoulder their burdens, fix their problems, or need or want something from him. Except food, of course. Jax was fond of his chow. And Lam appreciated that.

“We’ve been over this.” Lam bent, rubbing a hand along Jax’s head and neck. “I still don’t speak dog.”

If it was possible, Lam would swear Jax rolled his eyes at him. And this wasn’t the first time either. Jax’s devotion might be unwavering, but that didn’t mean the dog found him amusing. Not in the least.

“Hungry?” He nodded. “Me too.” Marta would have something waiting in the kitchen—for both of them. The highlight of his day. Maybe his sister was right. A hobby might be in order. Preferably a hobby that wouldn’t require him to drive twenty minutes into town.

He stood, coming face-to-face with a framed photo of his father. Joseph Draeger. He wasn’t smiling. He hadn’t believed in smiling for photos. Not that he’d been much for smiling when there wasn’t a camera involved either. His father had been a no-nonsense man with high expectations, unyielding principals, and was the keeper of long-standing tradition—no matter how archaic. In the four months since his father’s death, Lam had been the one to take on the monumental task of managing the family ranch. In that short time, he’d come to respect his father’s devotion to the ranch more than ever. And he resented the secrets his father had put on Lam to sort out now that he was gone. Secrets that included sending money to a woman in Arizona. Lam’s stomach twisted.

Jax pawed at his calf.

“Yeah, yeah.” He sighed, straightening the corner of the photo. “It’s not right to talk ill of the dead. Or think it.” His gaze swept over the wall covered with Draegers past and present.

His family was made up of hardworking, resourceful, and tough folk. Their word was their oath and their family always, always, came first. He cast another glance at his father. At least most of the time. Nothing like taking over the family finances to realize things weren’t as no-nonsense as his father had led them all to believe. His fine, upstanding father had secrets, and Lam was left to sort those out, too.

Like always, the picture of Grant caught his eye. His boy’s too-big cowboy hat and snaggle-toothed grin always lit up his world—before shredding his heart. He touched the picture, traced the curve of his son’s smile, and fought to keep the grief at bay.

Jax nudged him with his nose.

He tore his gaze from Grant’s picture, forcing himself to walk on. “I’m going.” His stomach growled. “Let’s go.”

Marta had been spoiling him with her evening snacks since he was a boy. She was one of the few staples on the ranch and his life—one he truly valued now. From her willingness to listen and deliver useful matter-of-fact life lessons, to her incredible soul-soothing cooking. Blood or not, he’d always considered the woman family, and, so far, she was one of the few people who’d yet to get under his skin.

After today, he could use some frank talk and comfort food. And, since the peaches were ripe, Marta would have made the most of the peach crop from his grandmother’s orchard. His stomach grumbled as he imagined her still-warm bread with fresh peach butter. Walnut peach cookies. Peach and pecan tarts. Shortbread. Pies of every variety. It was a good damn thing he worked hard all day, or he’d be getting downright soft in the middle.

If he was lucky, she’d have coffee, too. He had paperwork that wouldn’t wait, and a cup of steaming black coffee was the only way he’d keep his eyes open.

The not-so-soft strains of music reached him. Big band music? Marta didn’t listen to anything but gospel music—mostly hymns sung by choirs. This was nothing like it. Horns, drums, and a toe-thumping rhythm. Definitely not Marta’s style. The closer he got to the kitchen, the more curious he became. He pushed the hand-carved wooden door wide and paused, his curiosity morphing into confusion.

Who the hell was the woman making a mess in his kitchen? Where was Marta? What was going on?

Sweet on the Cowboy is currently available in digital format only: 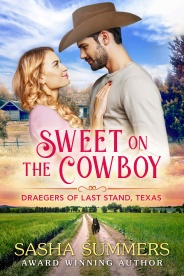 Did you know that Sweet on the Cowboy and many titles are available digitally from Tule's own bookstore? Check it out!