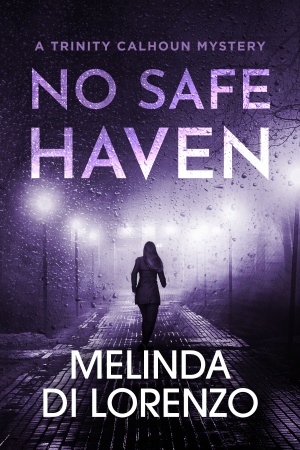 You can’t go home again…but can you return to the life you’ve made?

After a harrowing experience in her childhood town, Detective Trinity Calhoun has at last been cleared to return to her job at the Vancouver PD—but with a caveat. Her boss insists that she eases back into it by being chained to a desk. Trinity understands the request. She knows it’s reasonable. But that doesn’t mean she likes it. Or will abide by it.

And the desk, it seems, is the last place she can be. Because someone is stalking her. Baiting her. Using her long-solved domestic abuse cases to draw her out. And whoever the culprit is, they know an awful lot more about her than she does about them. Soon, everything Trinity values is on the line: her memories, her reputation, even her sanity. Nowhere is safe, and she can’t trust anyone offering her help—including her closest allies.

But is putting faith in only herself enough to stay alive?

Met with patient today for initial assessment, as per request of her employer. Patient was calm and lucid, but physical injuries are extensive. Hospital stay has thus far been three days and is expected to span weeks.

Upon learning my area of expertise, patient stated that her injuries were “only physical” and suggested my services might better serve “someone who needs help.” Declined an invitation to talk about the events leading to her hospitalization and how they made her feel. Almost hyper-focused on a return-to-work timeline.

Given the patient’s physical state and reluctance to receive counseling, will revisit again in one week to ten days’ time.

“Is this seat taken?”

The question wasn’t spoken loudly. It was low in timbre, actually. Maybe even bordering on quiet. But it cut through the noise in the smoke-hazed bar, and it caught her off-guard. She looked up in silent surprise at the man who’d addressed her.

“Is this seat taken?” he repeated, no more forcefully than he’d asked the first time.

She studied him for a second. He was the kind of person who would blend into a crowd. Not too tall. No distinct features. Brown hair, brown eyes. Even his clothes were nondescript. Plain gray T-shirt and black pants with no visible labels. He was older than she was, but maybe not by more than a few years. A decade at most. And then only if she was pushing it. There was the tiniest bit of something beaten down in his gaze, but nothing lascivious in his pose.

“I’m not hitting on you,” the man replied, offering a small smile. “I promise.”

She was glad it was dark because it meant he couldn’t see the sudden blush in her cheeks. Had her supposition been that obvious? She’d been approached by her fair share of men over the years. She gave off a vibe, apparently. Or at least that’s what her ex had told her right before he walked out the door a month ago. Pretty. And needy.

“Not meeting anyone?” the man asked as he slid onto the barstool beside her.

“No. Just having a drink alone after work.”

His face fell a bit. “Oh. Well, I can try to find a different spot.”

Quickly, she shook her head. “No, it’s okay. I didn’t mean it like that. Seriously. The place is packed, and it’s only going to get worse. Please stay there.”

He put up his hands in defeat. “Okay, but only because you insist.”

A laugh crept up, surprising her. Unconsciously, she covered her mouth.

She pretended not to notice anything more about him. But from the corner of her eye, she saw how he signaled to the overworked bartender, then waited in patient silence until his drink appeared in front of him. Bourbon, neat. He frowned into it for a few seconds while that vague sadness made another appearance. Then he swished the liquid around and sniffed it before finally bringing it to his lips. His mouth puckered after he swallowed, and he sighed.

Then she immediately chastised herself for caring. And she doubled the admonishment for her acute awareness of his movements. There was no reason for her to pay attention to any of these things. None at all. Romance was far from her mind. She’d spent two years working on a relationship with a man who, in the end, admitted he couldn’t articulate his problems let alone tackle them. Another emotional project wasn’t on her to-do list.

Moments passed. Then a full minute. Maybe two. Around her, the noise of the bar picked up. A popular song came on and reached its crescendo. The man made good on his promise not to hit on her, but when the sounds swelled to an all-time high, he did lean in a little closer and speak again.

“I have a confession to make,” he said.

A flicker of unease danced along her spine, but she was more intrigued than nervous. “What is it?”

“You’re not a stranger to me.”

“No.” He shook his head. “But I’ve been watching you come in here for the last couple of weeks.”

She took a quick sip of her martini and braced for the inevitable come-on. She also tried to take a surreptitious look around for an escape route, if needed. But the man’s voice pulled her attention back before she could find one, and when he spoke, it wasn’t flirtatious at all.

She swallowed the cool liquid in her mouth and didn’t answer. It had sounded creepy. There was no sense in denying it.

“I should’ve phrased it better,” the man told her after another few seconds. “I’ve been coming to this bar after work for a few weeks. Drowning my sorrows. And I noticed you were here a lot, too. You always sit in the same spot.”

“We all tend to fall into patterns, I guess.” He tipped back his glass, emptying it before setting it down and standing up. “It was nice not meeting you.”

“Nice not meeting you, too,” she replied.

He offered her a quick nod and a quicker smile, then turned and strode toward the exit. She watched him go. Mostly because she could get away with staring now that he wasn’t looking her way. A strange feeling played along her skin. It wasn’t attraction. It wasn’t disquiet. It was something else. The sensation that the non-meeting was about to change the trajectory of her life.

No Safe Haven is available in the following formats: 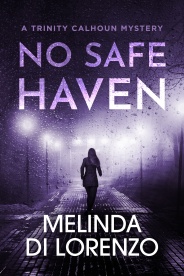 Did you know that No Safe Haven and many titles are available digitally from Tule's own bookstore? Check it out!