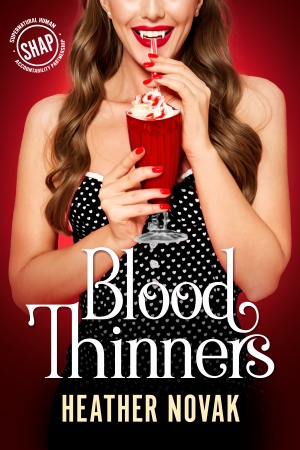 Supernatural investigator Mina Summers is only one undercover mission away from the promotion she’s worked for her entire career. Her assignment is simple: figure out why several unregistered vampires are going rogue—including one that ruined her best suit—and attacking humans. Her investigation leads her to Thinner, a new celebrity-endorsed weight loss company that’s shrouded in mystery and promises seemingly impossible results.

Mina’s convinced she’ll finish her mission in time for dinner, but when she face-plants into Carma Nicks, Thinner’s smart and sexy vice president, Mina’s suddenly out of her depth. Surely her heart is only racing due to adrenaline, right? Falling for—and sleeping with—a mark goes 100% against protocol, but Mina’s plans to keep her distance are as flimsy as the agency-issued ghost that resides in her apartment.

When Thinner’s secrets disrupt the peace between supernaturals and humans—and threaten Carma’s life—Mina’s forced to choose between protecting her dream career or saving the woman she loves.

Blood Thinners is currently available in digital format only: 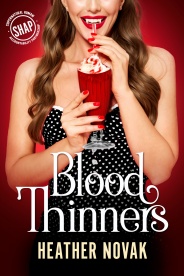