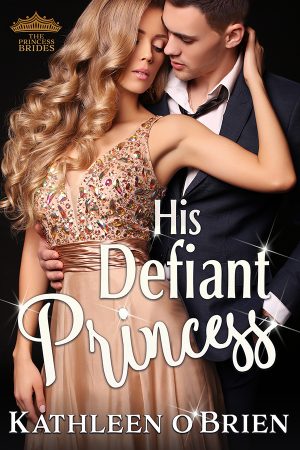 Brenna Tinley has decided to move to the Unified Isles of Cornetta, a fairy-tale kingdom just south of France in the Bay of Biscay to escape the recent tragedies in her personal life. The happiest summer she can remember was spent there, in the arms of a handsome, tender rascal who disappeared without a goodbye when Autumn came…

As fate would have it, the Royal House of Vicenza has engaged Brenna Tinley to clear up a public relations mess. It’s the opportunity of a lifetime for this small-town American girl, but there’s only one problem. Her new employer, HRH Prince Ronan, aka her mystery summer lover of long ago, seems determined to pick up where they left off. Can Brenna work in the royal palace and not end up with a brand new broken heart?

“Ah, the rogue prince. Now here’s something we can agree on. The medieval absurdity of royalty.”

Brenna looked over—and instantly regretted it. All three screens were tuned to the same station—the Unified Isles of Cornetta Broadcasting, or Uck-bee, as the locals called it.

Uck-bee always devoted far too much airtime to The Monarchy Watch. Right now, they seemed to be covering a local artist exhibit at the museum, not because the art was significant, but because members of the royal family were in attendance.

For several minutes, the camera trailed Queen Esme slavishly. She was lovely, tranquil and surprisingly young to be the mother of two grown sons. She always got her share of attention.

But the main attractions of The Monarchy Watch were her two gorgeous, glamorous princes, Emory and Ronan. The instant the cameraman spotted Ronan standing off to the side, the focus shifted, and the rogue prince, as the tabloids loved to call him, took the spotlight.

What a sexy, unapologetic rascal he was, tilting his head first one way, then another, as if trying to figure out the painting in front of him—which was, admittedly, rather bewildering. Then he grinned at the camera, and for a moment Brenna caught her breath. It was as if he was grinning straight at her, as if it amused him to meet her here.

Even in a video, he crackled with life. At thirty, he was long, lean, trimly athletic, graceful in that way that said he was the master of every muscle he owned.

His face was mobile and intelligent. His dark brown eyes somehow managed to smolder and twinkle simultaneously. And they were about twice as big as they should have been, set in a fringe of black lashes so thick and long they looked fake.

And that smile. Wolfish, adorable, a smile that leaped off the screen and landed right at the bottom of Brenna’s belly. It lay there, warm and tingling, like something alive.

And yet, that smile still jolted her in a primitive way.

Just when she thought she couldn’t stand it anymore, the reporter came back on, segueing into a new story, a new location. Brenna inhaled jaggedly. Thank goodness.

Brenna knew what Willow meant. For most of the world, the Vicenza royal family had only one real prince: Emory. Ronan’s older brother. The heir.

Ronan, the “spare,” was more like a movie star than part of the monarchy. He was a celebrity, a touch of spice in the otherwise blandly virtuous royal porridge. But Emory was a saint, a leader the country could trust.

Uck-bee was outdoing itself today. They’d apparently cut straight from the museum to some rural school, where Emory stood on a temporary stage erected in the courtyard. He was holding a microphone, waiting his turn to speechify, and nodding at a guy in a suit.

“The fairies certainly gathered around the cradle to grant gifts when these boys were born, didn’t they?” Willow shook her head. “Nothing horsey and inbred about Cornettan royals. Which just makes them more dangerous, if you ask me.”

Brenna laughed, but she wondered whether Willow despised them as much as she pretended to. Ever since Maisie’s father had skipped out during the pregnancy, Willow had been rough on men. She kept professionally cool in the office, but in private she always had something snarky to say about their looks, their personalities, their morals or their brains.

Lately, she’d been fixated on what a fake Emory Vicenza must be. Too good to be true—never a hair out of place, never a social or political misstep.

“Is he alone?” Willow’s interest seemed to be dwindling too. She was flipping through a stack of mail, watching with divided attention. “I wonder where his vestal virgin is.”

“Are you kidding?” Willow shot a look over her shoulder, full of pity for Brenna’s naiveté. “He obviously ordered this chick custom-made from the princess store. Swan-necked beauty…check. Unimpeachable pedigree…check. Officially documented virginity…”

“Enough.” Brenna held up a hand, trying not to laugh.

“Well, I mean it. It’s sad.” Willow grinned. “Guess we’re lucky we have such disreputable pasts, huh? Nobody will ever be forcing you or me into a sacrificial marriage for the good of the kingdom.”

Talk about stating the obvious. Marry the prince? An unwed mother? A divorcee whose ex’s current address was federal prison? Nope, the glass slipper didn’t fit them. Not even close.

Brenna controlled a flush. Her fair skin showed everything, and she would rather not reveal how deep to the bone that comment cut.

Willow knew nothing about Brenna’s history with Ronan. She knew only that Brenna had met a man named Ron that summer, her gap year, but that “Ron” had disappeared without a word, breaking Brenna’s heart.

Even Brenna hadn’t discovered her lover’s real name until she and Willow moved here five years ago—nearly four long years after that stolen summer. She’d spotted Ronan’s picture in the paper, and she’d just stood there, mute and paralyzed, for a long, long time.

Her Ronnie was a prince? Ronnie with the ratty backpack and tangled curls so long they caught on his lashes…was second in line to the throne of The Unified Isles of Cornetta?

She’d been stunned, and at the same time strangely ashamed, as if she’d been the butt of a painful practical joke. She hadn’t ever told Willow, or anyone. She might have confided in her father…but he was already dead.

She stared at the TV, not because she had the least interest in Emory, but to avoid Willow’s scrutiny. She read the sign on the building behind the men. Not a school, after all. A women’s shelter.

The man next to Emory was still leaning in, whispering. Brenna felt sorry for the prince. His companion was clearly one of those annoying types who never drew a breath.

And suddenly, for the first time, Emory spoke. He used English, though most Cornettans spoke French, too, and either language rolled easily off the royal tongues.

“Well, of course being an unwed mother is difficult,” the prince said in clipped, irritable tones. “Maybe she should have thought of that before she had sex with a deadbeat.”

Willow gasped. Her hand went to her mouth automatically, as if she could retroactively prevent Emory’s words from being spoken.

Even Brenna widened her eyes.

Every syllable he uttered had come through with shocking clarity. Almost instantly, at least a dozen people rushed up to him, circling, bending close and whispering urgently. Someone pulled the microphone from his hand.

Over the next few seconds, in what seemed like an excruciating slow motion, Brenna watched Prince Emory realize what everyone watching—probably at least a third of his countrymen—already knew.

His mic had been live.

“Oh, no,” Brenna breathed. If it had been Ronan, no one would have blinked twice. But from Emory the Exemplary…

She glanced over at Willow, who seemed stunned. In that instant, Brenna realized that Willow’s contempt for the royals was only an act. Willow had secretly believed Emory might be the one true hero, the one white knight in a world full of jerks.

Oh, Willow. Brenna wanted to put her arm around her friend and comfort her. She wanted to tell her that it shouldn’t be such a shock. Idols always fell from their pedestals, sooner or later. No man on this earth, or any other planet, was as flawless as Emory Vicenza was cracked up to be.

Just as no man could be as frivolous and unreliable as they accused Ronan Vicenza of being. Brenna knew, first hand, that even Ronan could be gentle and kind…

Sure. Right before he went back to being frivolous and unreliable, and breaking your heart.

She caught Willow’s eye and gave her a wry smile.

“Now there,” she said, tilting her head toward the TV, “is a man who’s going to need some help with public relations.”

His Defiant Princess is available in the following formats: 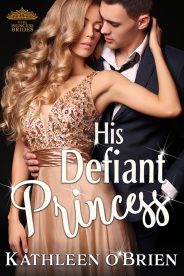 Did you know that His Defiant Princess and many titles are available digitally from Tule's own bookstore? Check it out!