All pop star Jackson Wilder wants this Christmas is a few weeks out of the spotlight in a rented cabin in the Colorado mountains. But when a blizzard leaves him stranded on a country road on his way out of town—and still wearing the Santa costume from a last-minute commercial shoot—he takes shelter in a nearby horse barn to wait out the storm.

Miranda O’Keefe will be lucky to get a wreath up on her door this year. Between raising her six year-old son, Ollie, running her vet practice, and getting her horse rescue project off the ground—Christmas will have to take a back seat. But when Ollie tells Miranda he’s found Santa Claus asleep in their horse barn—and has asked Santa to heal his beloved rescue horse Twisty—the self-reliant single mother finds herself asking for a stranger’s help to grant her son’s Christmas wish.

But when attraction turns to affection, will love come to the rescue this holiday for Miranda and Jackson too?

Each book in the Miracles of Christmas series is standalone:

*Rescued by Christmas
*Christmas Comes to Snowfall
*Boyfriends of Christmas Past

“Jacks, are you sure you won’t wait until morning to leave?”

Jackson Wilder tossed his agent a warning glance over his shoulder as Ted Carlisle followed him into his dressing room and closed the door behind them.

Not a chance. After a long day of filming holiday commercial spots, all Jackson wanted was to get out of this big red oven mitt and on the road to his mountain hideaway. Two glorious weeks off the grid, where he could pretend to be the unknown California beach bum he was before his break-out single, “Under Your Skin,” made him one of the country’s hottest pop stars five years ago. And no stalled snowstorm was going to mess it up for him.

“I don’t know how these department store Santas do it.” Jackson yanked off his fur-lined hat and gave his sprayed-white hair a hard ruffling. “It’s like walking around in a giant sauna.”

“I still say you should keep the beard,” said Ted. “Facial hair is hot right now.”

“It’s hot, all right,” Jackson muttered. “As in boiling.” He scratched at his whiskered jaw—the one part of this Santa Claus costume he wouldn’t be able to remove until he got to the cabin. Jackson only hoped the white would wash out as easily as the makeup people promised. They’d even managed to coat his eyebrows with the awful stuff.

“I don’t know why you’re complaining,” Ted said. “You told me you wanted to make a difference this Christmas. A beard is different.”

“That’s not what I meant and you know it,” said Jackson, tugging at the collar of his Santa suit for relief. “I wanted to do something to give back this year. Something meaningful.”

Ted’s mouth curled into a smirk. “If it makes you feel any better, fifteen percent of this singing Santa deal is pretty meaningful to me.”

“Speaking of hearts…” Ted folded his arms. “Mine is still dangerously close to stopping at the thought of you driving yourself up that mountain.”

“Relax, will you?” said Jackson. “I don’t know why you’re so worried. You said you rented me a good snow truck, right?”

“Having a good snow truck is only good if you’ve got a good snow driver,” Ted pointed out irritably. “And let’s review again how many times you’ve driven in snow?”

“Including today? Let’s see…” Jackson glanced upward, pretending to deliberate then grinned. “Once.”

His agent’s lips wrinkled with displeasure, clearly not appreciating the attempt at humor. “At least let one of the crew drive you.”

Jackson frowned. “And have someone else know where I plan to hide out for the next few weeks? Forget it.” He reached down to tug off his black boots. “Besides, you’re looking at someone who spent their teenage years doing doughnuts in a Jeep on the beach. How different can snow be from sand?”

“The fact that you are even asking me that question is a problem,” Ted muttered, moving to the dressing room window while Jackson struggled to free his other foot. “Oh crap.”

His agent squinted through the parted blinds. “Better get comfortable. There’s quite a crowd out there waiting for you.”

“You told me no one knew we were filming here.”

“Thank the wonders of social media.”

Jackson fell back with a defeated groan. So much for a quick getaway.

“My advice?” Ted pointed to the red Santa hat Jackson had just tossed on the chair. “Keep the suit on and go out the side door. Your fans will be looking for Jackson Wilder—not Santa Claus.”

It wasn’t the worst idea. As much as Jackson couldn’t wait to get out of this steam bath of a suit, it might be the only way to sneak past. Usually he loved connecting with his fans, but right now all he wanted was to hit the road.

He shoved his feet back into his black boots and yanked the red hat back over his head.

Ted offered a weak smile. “Look on the bright side: at least you’ll be warm.”

There was that, Jackson supposed as he grabbed his packed duffel and walked with Ted back out into the hallway.

At the side exit, his agent handed him a set of keys. “It’s the black Range Rover with the Arizona plates. Call me when you get there, okay? Let me know you didn’t drive off the side of the mountain?”

Rescued by Christmas is available in the following formats: 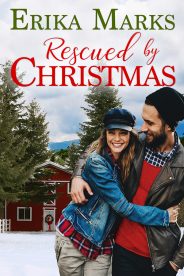 Did you know that Rescued by Christmas and many titles are available digitally from Tule's own bookstore? Check it out!