The Gallaghers of Montana, Book 5

The Gallaghers of Montana, Book 5

Return of the Cowgirl

He knows who she is…but she doesn’t

PI Mitch Hardeman is an expert at finding people, so when Glenna Gallagher disappears from the ranch where she works, her brothers hire Mitch to find her. He thinks his job is done after he tracks her down, but Glenna doesn’t know him, and she doesn’t remember her brothers or even her real name. Mitch must earn the beautiful cowgirl’s trust so he can bring her back home.

With traumatic amnesia caused by a bus accident, Glenna Gallagher knows nothing of her life before that day. She only knows she’s in danger, and that Mitch offers protection and the truth about her identity. But once home in Marietta, her memories are still missing. Can she convince Mitch that she doesn’t need to remember her past to know he’s the only man she wants? And will she regain her memory in time to save herself and the man she loves from the danger that follows her?

She sat at a small table in an outdoor café in Valparaiso, Chile, a battered backpack at her feet. She looked as lost and alone as anyone he’d ever seen. Mitch Hardeman walked up to her table and said, “You are a damned hard woman to find.”

“No entiendo,” she said, her expression changing to annoyance. And oddly, alarm.

Bullshit, you don’t understand. But if that’s the way she wanted to play it, fine. “Vos sos una maldita mujer dura para encontrar,” he repeated in Spanish.

“You must have me confused with someone else. I have no idea who you are or what you’re talking about,” she said, still in Spanish.

He didn’t mind speaking Spanish, although he didn’t know why she was pretending to not understand English. “You don’t know me, but I know you, Glenna. My name is Mitch Hardeman. I’m the private investigator your brothers hired to find you.”

“My name is not Glenna and I have no brothers. Go away or I will call the waiter to remove you.”

Instead of leaving, he pulled out a chair and sat, signaling a waitress. When the woman came over, Mitch ordered coffee for two. He lifted a brow at Glenna to see how she’d react but she simply shrugged and turned away. For a moment he wondered if he’d made a mistake, but even though this woman had brown hair instead of dark red, he knew she was the woman he’d been chasing for the better part of three weeks.

She didn’t stand out as American—he’d give her that. With dark hair, a smattering of freckles and green eyes, and wearing a dress with tiny flowers on it, she looked as much like a native as anyone. She sure as hell spoke Spanish like a native, but then, she’d been living in Argentina for years.

He tried again. “Your brothers have been looking for you since they discovered you vanished from the Villareal Ranch several weeks ago.”

“Brothers? I told you I have no brothers and I know nothing of this ranch you speak of. Go away,” she repeated.

Mitch pulled out the picture of Glenna Gallagher he carried with him and showed it to her. He had digital photos as well, but it was often easier to show people a paper photo. “Are you trying to tell me this isn’t you? You aren’t Glenna Gallagher?”

She looked at the picture and paled. “That is not my name, no. So go away. Now.”

The waitress returned with their coffee. NotGlenna took hers with a thank you and sipped. Her color had come back and she seemed to have collected herself. Apparently growing tired of Mitch ignoring her requests for him to go the hell away, she got up, slung her backpack over one shoulder, and without a word started walking off.

Mitch threw some money on the table, picked up the picture and followed her, catching up to her a short distance from the café. “Other than your hair, you’re the spitting image of the woman in this picture. So stop it with the denials. I know good and well you’re Glenna Gallagher.”

Glaring at him, she said, “My name is Rosalie Torres.”

This was why he’d lost her just after Zapala. She’d changed her name, dyed her hair and disappeared. Again. She was worried about her previous employer tracking her down. Otherwise, why the phony identity? But if she really had embezzled fifty thousand bucks, then what the hell was she still doing in South America? She should have been long gone by now.

Her brothers maintained she hadn’t done it. They were convinced that wasn’t the whole story and that their sister would have never stolen anything, much less fifty thousand bucks. He wasn’t so sure, but after meeting her employer, Jorge Villareal, and his son, Rolando, Mitch leaned more toward believing her innocent.

The men—especially the younger man—hadn’t been any more forthcoming with Mitch than they had with Dylan Gallagher when he’d talked to them. They’d flat-out lied to Dylan about how long Glenna had been gone. As to why they lied, all he could think of was to make them think there was no point in looking for her. They wanted nothing to do with Mitch, and were clearly angry that he’d come looking for their errant employee. They did ask him to let them know if he found her.

Yeah, that wasn’t happening. Not too long after he left the ranch and continued his search he figured out someone else was looking for her, and had been for a while. Probably since she’d disappeared. Villareal’s flunkies seemed the most logical conclusion.

So while he kept up his own enquiries, he was able to catch up with them pretty quickly. All he’d had to do was show Glenna’s picture around and ask if someone else had been looking for her.

He wasn’t sure how she’d managed to evade them for so long. She was clearly smart and resourceful. And desperate?

That’s the feeling he got. So how could he get her to admit she was Glenna Gallagher?

“Are you afraid the Villareals are looking for you?”

She looked at him blankly. Really blankly. As if she had no clue to what he was referring. “The Villareal Ranch?” he prodded. “You know, the place you lived and worked at for the last seven years? Until you were accused of embezzlement?”

“Embezzlement? You’re crazy. I’m not this Glenda person. Must I call the police so you’ll leave me alone?”

This was not going how he’d envisioned it. Did she think he was on the Villareals’ payroll? Maybe she didn’t believe he came from her brothers. Or…could he be wrong? What if she really wasn’t Glenna but simply looked enough like her to be her twin? Except for the hair, of course. But hair color was easily changed. He tried one more time. “Glenna, not Glenda. Do the names Jack, Sean, Wyatt and Dylan Gallagher mean anything to you?”

He watched her closely but didn’t see a glimmer of recognition. Nothing to indicate she’d ever even heard of the four men who were her brothers.

Instead of answering, she ducked into a store, one of those selling everything from fabric to antiques. Crammed full of merchandise as well as people, it was an effective place to lose someone. But not Mitch.

She ran out the back door and Mitch followed, only a minute or two behind her. He burst out the door just in time to see a man grab her and drag her, fighting madly, toward a beat-up van waiting in the street.

Return of the Cowgirl is available in the following formats: 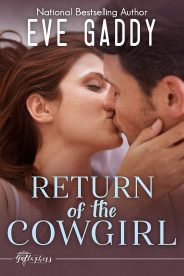 Did you know that Return of the Cowgirl and many titles are available digitally from Tule's own bookstore? Check it out!