Single father Colin McKinnon has roots and obligations that have kept him firmly in Dublin his entire life. He once planned to explore the world, but he was bound by duty and gave up on his dreams long ago. When he meets free-spirited American travel writer Maggie in a pub, he’s intrigued. She could help him get a taste of what he lost, rattle the chains of his self-imposed isolation. Instantly drawn to her light, beauty, and sense of adventure, Colin can’t stay away.

Maggie Spencer doesn’t just crave the open road, she needs it to survive. After a harrowing accident and life-changing loss, she rebuilt her life by exploring new places on her own. When she accepts a temporary job writing about day tours in Ireland, she falls in love with Dublin and the man she teaches to explore it. Through their daily adventures, they learn opposites do more than just attract—they can also help each other heal.

But can a man with deep roots keep a woman with wings by his side?

“You sure you wanna sell it?”

Colin McKinnon didn’t even hesitate. Didn’t even glance down at the piece of gold. He only looked into the pawn shop owner’s watery eyes and said coolly, “Aye. It’s either sell it, or throw it in the river. Figured I might as well get a few euros for it.”

“Okay then.” The older man picked up an eyepiece and studied the ring closely.

Colin waited, patient as he leaned a hip against the counter. Strange how he felt nothing, watching this man gage the value of the yellow-gold band he’d worn for nineteen years. Then again, he’d felt numb inside for so long, it didn’t surprise him, really. He just figured he should feel something as he was about to sell his wedding ring, and he truly didn’t.

Last night, as the moon rose, he’d been walking along the banks of the Liffey when he looked down at his hand, glanced at the ring, and had an overwhelming urge to toss it into the river with all his might. Then he thought, why not get some money for it, take the kids out to dinner at least. Buy them something. So here he was.

“I’ll give ya a hundred euros for it,” the man finally said.

“‘Fraid so. If ya shop it round, you’ll get similar offers. Maybe even less.”

Fifteen minutes later, he walked out of the pawn shop with one hundred euros in his pocket and emptiness in his heart. He squinted up at the sun, took a deep breath, and got in his car. His lunch hour was almost over and he had to get back to work.

He wondered what Trish would do with her wedding ring. Would she keep it or sell it? Then he wondered why he’d thought of that. He didn’t care. After a long, loveless marriage, then the five-year waiting period for the divorce, they felt nothing for each other now. Yes, a kinship over parenting their three kids, but beyond that? It’d been over for a long time.

Even though the divorce was final at last and he’d moved out a week before, it was still seeping into his brain that he was a free man. Free to do whatever he wanted for the first time in almost twenty years. Or ever, really.

He figured he would in time. He was used to being lonely; he’d been lonely in his own marriage for so long, so tired of going through the motions, that he’d finally asked for a divorce. And Trish hadn’t really fought him on it, so at least he didn’t have to feel guilty. She wanted out too. Which spoke volumes.

At a stop light, he wiggled his fingers. His left hand felt so strange without the ring on it. But good strange. The same kind of good strange that had permeated him when he’d moved into his own tiny flat. He hadn’t ever lived alone before. He’d gone from his crowded childhood home to university, where he’d had roommates in the dormitory, to marrying Trish weeks after graduation.

Lots of new things lately. Lots of adjustments. His head was still spinning.

But it had occurred to him on his walk along the river last night that he was also free to chase down a long-dead dream or two. Maybe he’d finally have some true adventures, like the ones he’d planned on before forced to give up out of duty when he was twenty-one.

Last night, something deep inside had whispered, “Better late than never. There’s a whole world out there. Go get it.”

Now if he could just feel something, anything, that’d be a good start. Numb seemed to be his new default setting. Numb, tired, adrift… he’d never thought he’d feel so lost at forty years old.

Love in Dublin is currently available in digital format only: 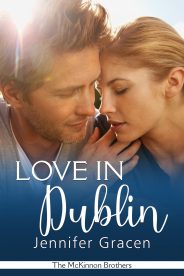 Did you know that Love in Dublin and many titles are available digitally from Tule's own bookstore? Check it out!