When a fantasy turns into a cold reality

Lexanne Harris had a plan down to the last sexy detail. Never did she think her attempt to spice up her love life with her boyfriend would involve her in a burglary with a sexier-than-sin thief whose emerald eyes and serious between-the-sheets skills are impossible to forget. As a police detective, she is expected to stand on the side of the law and fight for justice. But what happens when the lines of justice blur and what’s wrong becomes way too tempting?

The situation might be challenging, but Lexanne is determined to get assigned to the case, recover the jewels and catch the culprit.

The question is: What will she do with her sexy cat burglar when she catches him?

I wanted this. Carefully, I lined my lips. I picked up my lipstick tube, twisting up the scarlet color. My hand trembled. I dropped the lipstick, laid my palms flat on the vanity, and drew a breath. Sex with a cat burglar.

My fantasy would come true tonight. I drew on black stockings, the shimmery, soft nylon slip sliding over my fingers, over my smooth skin, gliding up past my knees to my thighs. With a soft click, I snapped them on my garter belt.

I stood in red stilettos and shimmied into my black leather miniskirt before checking out my reflection in the gilt-edged, full-length mirror. My dark hair was sleek and down for once, falling past my skimpy black bra, brushing my mid-back and sending little tingles over my skin.

I shook my head. That didn’t matter. I’d played out Mark’s kinky fantasy; now it was my turn. We’d worked it out, scripted it. He would break in at 3:00 a.m. dressed completely in black, his face hidden. We’d only gone on a couple of dates, but of course I would know him—by his build, his blue eyes, his touch. And I would pretend I didn’t. I would put away everything I knew of Detective Mark Finney and imagine.

Imagine a stranger’s touch on my flesh, a stranger’s lips on mine, a stranger’s teeth scraping my jaw. I would imagine a cat burglar’s nimble fingers removing my clothes, baring me before him. It was not so far-fetched as fantasies went. A series of burglaries had plagued Los Angeles all summer. And while I personally might not own anything worth stealing, the house where I was staying had a safe full of priceless jewelry. For two weeks, I was house sitting the Brentmoor estate. I would never have a better opportunity.

I heard the soft slide of a window frame and glanced at the clock. He was early. I sucked in air even as I shivered in the slight breeze.

I scrambled onto the four-poster bed, the burgundy velvet spread draping over black satin sheets and a fluffy down comforter. I turned the covers down and positioned myself just so and waited, listening. Was that a step on the stairs or just my heart pounding?

This was my moment and, dammit, I couldn’t hear a thing. Not a breath, not a whisper. What was Mark doing?

Teasing me, that was it. Making me wait for what I wanted.

I couldn’t stand it. In a brush of leather against satin, I slid off the bed. Teetering in four-inch heels, I crept to the top of the stairs and held my breath.

Did I hear him?

I stepped down thickly carpeted stairs, careful to keep my balance in the unfamiliar dark. I tilted my head. Using intuition more than a sense of hearing, I walked toward the front hall. Was that him moving through the house as if on a sigh? God, he was good. I’d never have heard him if I hadn’t been listening, expecting him, anticipating.

I moved across the massive foyer, slid open the door to the parlor, and caught my breath. He stood before me, light from the moon illuminating his gloved hand.

He wore all black as promised—a bad boy, a criminal, and mine for the night.

Because tonight I wasn’t Lexanne Harris, police detective, law-abiding and responsible. Tonight I was wanton.

Our eyes met down the length of the room. My hungry eyes took in every inch of him. He was magnificent, prey and predator all in one. He was a panther. I was the hunter. And I’d caught him. I opened my mouth to speak my sassy, prearranged line when my burglar turned and ran.

I blinked and bit back a laugh. He rounded the corner into the dining room, and I scampered after him. “Wait,” I called, breathless from excitement. I staggered to a halt.

He hesitated, facing me across the expansive cherrywood table. His eyes shone through the mask. He gave me a long, lingering once-over. The corner of his mouth turned up. Amusement?

Now we were talking. My burglar stood still and solid. I undid the metal clasp on my skirt. With a naughty little wriggle, I eased it down and off. I approached the table and put one knee on it. His eyes flicked to the table and back. I pulled myself up. Now crouched on hands and knees, I crawled toward him. Two feet from where he stood, I sat back on my heels.

His breath came faster, but he didn’t move.

Fine. It was my fantasy after all. Keeping my eyes on his, I reached up, stilled the tremble in my fingers, and unhooked the front clasp on my bra.

My breasts spilled out.

He licked his lips. They gleamed in the dim light. He stepped toward the table. My gaze roved over him. He looked bigger than I remembered, more imposing. He moved with lithe grace, his step silent on plush carpet. He took my breasts in his gloved hands. The supple leather felt cool, his touch firm against my flesh. He squeezed. I arched and gave a soft cry, scripted lines forgotten.

His gloved hands slid around, clasping me. He brought his face down to me and breathed warm against my cheek. I found his waist and slid my hands up his rib cage, feeling the solidness of him, pleased.

Mark was a dedicated body builder. I could feel the six-pack abs through his skintight pullover. I leaned closer and bit his shoulder. He pinched my nipple hard. I sank my teeth, never breaking through fabric. He gave a twitch. I bit harder. He tugged on the lace table runner, inching me closer. My breath hitched as he pulled me to him. I swung my feet over the edge. My bad boy stepped between my legs, his gloved hands sliding up my thighs.

I opened my mouth to give him directions, but that wasn’t part of the script.

With a flick of his hand, he ripped the fabric of my skimpy undies. I gasped. He threw them over his right shoulder, his lips a thin smile. In a deliberate motion, he held both his hands in front of me as if asking permission. I nodded. Painstakingly, he tugged on a glove, loosening each finger. I took the tip of his glove in my mouth, angled back, and it slid free, releasing his hand.

Then his magic fingers went to work. He slid one into me. I was already wet for him. God, he was hot. Mark was acting this out better than I’d ever imagined. Usually he was in a hurry to satisfy himself, but tonight he’d kept his promise. This was all about me.

He caressed my sensitive lips, teasing my opening. I thought my eyes would roll up in my head. He found my clitoris and massaged languidly like we had all the time in the world. And so we did.

Steal My Heart is available in the following formats: 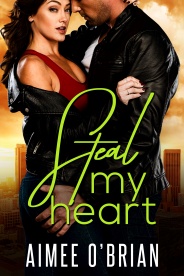 Did you know that Steal My Heart and many titles are available digitally from Tule's own bookstore? Check it out!