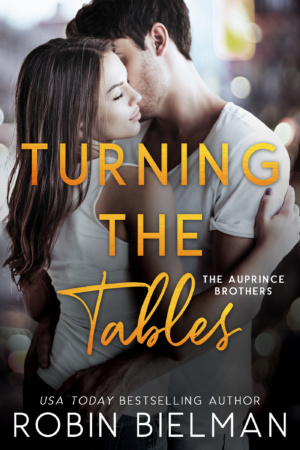 Smart and ambitious, Ethan Auprince is one of the hottest restaurateurs on the West Coast. With his sexy-as-sin dimples and unmatched charisma, he’s also collected a large number of fans—a welcome position to be in until unwanted attention turns worrisome. He thinks he has it handled, but his family believes otherwise and secretly hires him protection. The surprise is on them, though, because his new “employee” is the one woman he’s never been able to get out of head.

Elite bodyguard Pascale Nichols is highly skilled, extremely confident, and in need of a win. A careless mistake on her last assignment cost her, and taking an undercover assignment is her chance to make things right. There’s just one problem—Ethan is the summer fling she fell in love with years ago and has never forgotten, which means her job just got a lot more complicated. Usually prepared for any situation, this time Pascale is in over her head.

But when tragedy strikes, Ethan turns the tables and plans to do whatever it takes to prove that this time, he’s playing for keeps.

“Who is the brunette?” I say to my brother, voicing my curiosity instead of waiting for an official introduction.

“Where?” Drew asks. It’s a legit question considering there are over a dozen brunettes in the restaurant, tonight’s private goodbye party for my manager filled with friends, family, and staff.

“At the bar.” I lift my chin in her direction. Hair piled on top of her head in classy disarray. Long, slim neck. Off-the-shoulder black top revealing smooth tanned skin. For some inexplicable reason, my eyes keep landing on her.

“The one talking to Charlotte?”

“How should I know? Her back is to us.” He places his palm between my shoulder blades. “There is this thing called introducing yourself, you know.”

I snicker. I own this restaurant and everyone in this room knows who I am. People come to me when I’m inside these four walls. I’ve worked hard to earn the reputation as the hottest restaurateur on the West Coast. A slew of publications rank me at the top of their Most Influential lists. All the exposure makes it easy to connect with any woman I want, usually at the snap of my fingers. Not that I’d make a rude gesture like that. I flash my killer dimples instead. The point is, we’re an hour into this party and I’ve yet to make eye contact with the brunette at the bar.

“Oh, that’s right,” Drew says. “Everyone who walks in the door of Royal already knows you.”

“Hey, Ethan,” her attractive friend mimics as they walk by, only this woman tilts her head and adds a sway to her hips that says, I’m all yours later, if you want. The only reason she doesn’t give the same hello to my younger brother is because he’s already been with her. A few months back. Humane Society charity event at my family’s downtown hotel.

I give a small smile to be polite, nothing more. She doesn’t seriously think she has a chance with me after being with my brother, does she? Drew and I share a lot, but women are not on that list.

Besides—my gaze falls back on the sexy curve of the brunette’s neck—I’m tired as hell, having just flown back to LA from a week-long trip to Vegas where I’m opening another restaurant. When I wasn’t working, I was playing. In the casinos, in the clubs, in private dining rooms. After-hours fun took the place of sleep. When I get home later, I may fall into bed in my clothes. That’s not true. I pull at the collar of my light blue classic-fit shirt. I don’t wrinkle my Armani, and I like to be naked when I slip between my Italian bed sheets. Alone or otherwise, and lately it’s been the former.

Which must explain my fascination with the brunette.

“The place isn’t going to be the same without Charlotte,” Drew says, reining in my wayward thoughts.

“No.” Charlotte’s been my manager since we opened three years ago and I’m sorry to see her go. “Damn boyfriend and his taking her to Vancouver with him.”

“Yeah, sucks to be him. New job. Hot girlfriend.”

“Whatever,” I say because I’m exhausted and okay, slightly pissed she’s leaving. Don’t get me wrong, I am happy for her—them—but I’m pretty sure my new manager won’t come even close to matching Charlotte’s level of competency and affability. I say “pretty sure” because I haven’t met her yet. Charlotte hired her while I was gone this past week.

“Your new manager starts tomorrow.” Statement, not a question. Leave it to Drew to know my schedule.

“Word of advice?” He pats my back again. My baby brother likes to think he knows it all. “Sound at least somewhat happy she’s here.”

A split-second expression of panic crosses his face before it disappears and I wonder if my tired eyes are playing a trick on me. “Charlotte mentioned it earlier.”

“Charlotte mentioned what earlier?” the woman herself asks, coming to a stop in front of us.

“Your replacement is female,” Drew says.

“And amazing,” Charlotte adds. “Are you free to meet her now, Ethan?”

A sudden crash sounds from the kitchen. “Actually, give me a minute,” I tell Charlotte as I step around her.

I raise my hand to cut her off. “I’ve got this. Enjoy your party.” Thankfully, no one else seems to have heard the noise, or if they did, they’ve chosen to ignore it. I pass the brunette—a light scent of vanilla and raspberries hitting my nose—walk around the bar, and step through the swinging door into the kitchen. What I see sends dread through me. It seems my stalker has struck again.

Not a stalker. Someone who wants to mess with me, is all. But my family thinks differently and their concern is reaching irritating proportions. I get that I come from a prominent family, which makes me a bigger target than someone less “famous,” but these childish antics are nothing more than that. Juvenile attempts to get my attention.

And I refuse to give them merit.

This time, a box of wine has hit the floor, red liquid splattered across the clear-stained concrete. More pressing is the broken glass. I don’t want anyone to step on it.

And then there’s the snake.

Yes, I said snake. Slithering slowly away from the kitchen staff huddled in the corner. I know I’m tired, but I swear the reptile is purposely darting his tongue out to lap up the Napa Valley wine on his way to an escape.

A round of “yes” rings out, followed by: “I’m sorry. When I opened the box, the snake was right there and I freaked out.”

“Understandable.” Thankfully, the snake isn’t rattling, and if I remember my days of exploring nature with my brothers when we were young correctly, this is simply a harmless garter snake.

To be on the safe side, I grab a pair of tongs off the stainless-steel worktable and give our unwelcome friend a lift toward the exit. He casually wriggles in the air while one or two of my staff squeaks. I open the door to the alley, unsure what to do, when I see an empty crate near the dumpster. Perfect. I secure the snake inside the container—tongs included—then return to the kitchen where cleanup has already begun. “Will someone please give animal control a call to let them know the snake is inside a crate outside?”

“On it,” my sous chef says, wiping his hands down his apron and pulling his phone from his back pocket.

“Thanks.” I check over the platters of food about to be carried out, grateful they weren’t contaminated. The dropped wine doesn’t bother me. Some person who’s targeted me for a reason I can’t figure out doesn’t bother me either. What troubles me is keeping the people in my employ—people I care about—out of harm’s way. I want a safe environment in which my employees can work and my guests can dine.

I don’t want anyone at Royal worried about their safety.

“You guys good?” I ask. My chef, Louis, is already head down, back to business. The rest of my staff nods and waves me off.

My mind eased, I take backward steps to leave the kitchen. And bump right into someone as I turn around in the hallway. Someone soft. Warm. Smells like vanilla and raspberries.

I’m momentarily stunned, eyes the color of Castelvetrano olives, but with a dirtier green ring around her pupils, finally meeting mine.

Turning the Tables is available in the following formats: 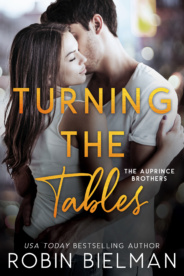 Did you know that Turning the Tables and many titles are available digitally from Tule's own bookstore? Check it out!