April Swanson is so hopeful about all the possibilities New Year’s might bring, she’s practically Pollyanna. She’s hardly wishing for the world, after all – just a little less family crazy and the promotion she’s perfect for. Surely then she can finally let loose and not strive to be such a good girl all the time.

For reformed bad boy, Finn Ward, hope is a four letter word, yet he has a New Year’s wish of his own – to silence his dark and twisted past before it unravels his future and hurts the people he cares about. No matter what.

So why would fate trick two such disparate souls into a fake first date? Maybe because they’ve both made the wrong wish…

Like a beautiful blank page at the beginning of a new notebook, untouched by thought, unmarred by missteps, it was the ultimate fresh start.

That moment when December tipped inevitably into January meant the packing away of a year’s worth of tangles with her sister Erica, screening her mother’s phone calls, her dad’s incessant lack of contact, that one time she didn’t keep her cool quite as well as usual, stopping her Fiat in the middle of the freeway to rain down ballistic-level road rage on a gargantuan, tattooed guy in a semitrailer who’d cut her off—

April took a steady inhalation, held it, let it go. She’d read somewhere that it was a great way to tamp down those cheeky little spikes in adrenaline she sometimes suffered Though cupcakes worked wonders on that score too.

She could see from the edge of the clock that it was a mere twenty-seven minutes till she could officially put it all behind her.

Erica thought April’s great love affair with the new year hopeless. But what Erica had never understood was, for April, it was like blowing out birthday candles, wishing on a star, and plucking the petals of a daisy all at once. The anticipation of that tick of the clock was the very definition of hope.

April clung doggedly to the thought as she navigated the zillion people crammed into her sister’s shoebox-sized Darlinghurst apartment for Erica’s New Year’s Eve/my lease runs out in three days/superhero fancy dress party. Even while April’s red Wonder Woman boots had already met something sticky squished into the ancient carpet and the scent of every tenant who’d ever camped in the place added to the underlying funk in the air.

“Stop clock watching and mingle,” Erica shouted in her April’s as she nudged her way past, looking cool and edgy in her Black Widow leathers, her long wine-red hair perfectly dead straight even in the muggy atmosphere.

Ever helpful, Erica said, “Come midnight, you’ll be swaying in the wind unless you get a move on and lock down some poor sap.”

“Thought I’d give the ‘poor saps’ a break this year.”

Erica’s hand landed on a leather clad hip. “Wow. Even the red boots not working for you?”

“The boots rock and you know it.”

If the way the hapless hipster with the smudged glasses and underwhelming Thor costume was anything to go by, they were as good as catnip. But kissing him at midnight meant she’d be kissing him at one second past and locking lips with some random guy wasn’t how she wanted her perfect new year to begin. Besides, the new guy at work was even more in need of her patented brand of “effective girlfriending” than poor Thor. And when she landed the promotion—fingers crossed—she and the new guy would no longer be in the same division so she could make her move.

She wasn’t making any mistakes this year. The stars were aligned. Everything was going to be perfect.

“I’m not looking for a midnight pash,” she shot back right in that sweet pocket of silence where one song faded and the next began. She lifted a shoulder at the group of random comic heroes staring back at her. “It’s true. I’m really not.”

The bubbly was cheap and plentiful and, with a world-renowned psychiatrist for a mother—Dr Kay Swanson’s The Truth Will Set You Free had made the extended New York Times bestseller list, no less—“honesty” was the Swanson family language. At least April considered herself honest. Erica was just plain blunt.

April shot a salute at the back of her sister’s departing head as Erica went back to her brand of hostessing; carrying a bowl of April’s famous, mini, red-velvet cupcakes—the only reason Erica invited her to these things, April was sure—high over her head as she gyrated through the crowd, dropping little bombs of sarcasm on her guests like gifts.

Nursing a paper cup filled with warm, flat “champagne”, April ducked under a labouring toilet paper “streamer” and made a beeline for a dark hidey corner. There she slid down the wall, wrapped her arms around her boots and sighed. The view of the clock over the kitchen bench was perfect.

Once the new year swung into action the niggle of dissatisfaction that had dogged her the past few months would be wiped away in a flash.

April took a deep breath; hope welling inside of her. And she settled in to watch the clock tick down.

At a very different New Year’s Eve party, not all that far away, Finn Ward also found himself in a corner. Lounging against the wall, he surveyed the sparsely elegant penthouse pied-à-terre where clinking crystal and tinkling voices bounced gently off silver balloons strapped to the chandeliers and smoky, double-story glass, lining the entire north-facing wall.

Fêted clients, Sally and Bob Jameson, lifted their glasses in salute from the other side of the room. Finn did the same.

The Jamesons stood on the tipping edge of signing over their mammoth investment portfolio and Frank couldn’t have looked happier; slapping backs, making jokes, all ruddy cheeked and content.

Another banner year, done and dusted.

Finn ought to be celebrating. Pride in a job well done was an allowable response. But pride was a difficult emotion to muster when the dark truth was that Finn had been struggling with the notion that the only difference between his current line of work and his first was the spoils. Digging behind old phone booths in search of buried coins, he’d been hoping to find enough to buy a loaf of bread; these days the reward for a single haul could buy him a yacht. Though what he’d do with a yacht he had no idea.

Taking care not to tip the flute of Dom Pérignon, Finn tugged his suit cuff away from his wrist and glanced at his watch. Mere minutes till midnight – so said the Bvlgari, a Christmas gift from Frank and wife. The moment the last speck of glitter hit the floor, Finn would thank the hosts, confirm plans with Sally and Bob, and he’d turn pumpkin and be out of there.

Not that it hadn’t been a cracking event. The grog was top-shelf. The weightless puffs of exotic food melted on the tongue. The company was clever and dry. The evening like a hundred others he’d attended since the day Frank had found him bussing tables as a twenty-year-old, hungry for a chance. And just plain hungry for that matter.

Finn brought the champagne to his mouth and drank, hiding the wince as the bubbles hit the back of his throat. He’d never acquired the taste, drinking the stuff only to appear in harmony with his surrounds. When the truth was this night, this life, was a million light years from the New Year’s Eves of his past.

He cleared his throat. Shook his head in an effort to clear it as well. But, of late, more and more such memories had been dredged up from the dark, dank corners in which he’d secreted them. Such as the amalgamation of dusty backyards of the interchangeable council lodgings his father had shuffled between during Finn’s teens. Drinking himself stupid and smoking till he was sick much to the delight of his father’s mates. Better him than his little brother.

A blonde in green sauntered past; the flash of rich colour and waft of expensive scent snapping Finn back to the present.

He breathed out hard, less than steady. Rubbed his left shoulder, even though the ancient injury hadn’t hurt in years. Then snagged his gaze on the owner of the dress, needing the anchor.

Cool, canny, a decade older than him at least, the woman’s eyes roved down his length, pausing a little below the belt before sliding back to his face. Her expression pure invitation. And promise. Wholly of this brave new world of which he was now a part.

Yet still another memory flashed out of the vault.

The first time Frank had invited him to a party it had been at the very same city apartment in which he now stood. He’d been quietly stunned to learn such a prime spot lay empty year round, used only for important clients and nights such as these. Finn had seen the spread of Sydney Harbour through those gargantuan windows and had felt like he was hovering above the world; so much so he’d dug his toes into his shoes and his nails into his palms in an effort not to fall.

Then someone had taken one look at him in his cheap black suit and given him their coat to put away.

Nobody in that room tonight would mistake him for the help.

Finn’s hand moving to the right pocket of his silk-lined suit jacket, his fingers brushing the envelope burning a hole therein. A corner frayed from overuse. The letter taking up space inside proof that no matter how much he looked the part, it was all an illusion.

He once again caught the eye of the woman in green, now on the other side of the room chatting with Frank’s elegant step-granddaughter Margot and her partner Gray. The blonde in green smiled his way; her intent clear in the way one hand ran over the slippery fabric of her dress, the other resting lightly on her husband’s arm.

No surprise. Women of her ilk gravitated his way. He wondered if his darkness, his otherness, the corruption of his childhood hadn’t been masked as well as he’d believed.

He breathed though his mouth; the scents of perfume, polish, and money permeating the rarefied air now cloying. The urge to slip away now was a strong one. To disappear.

He’d done it before, with ridiculous ease. He could do it again. Hell, maybe that yacht would come in handy after all.

But for tonight he’d merely melt back to his big empty apartment, foregoing champagne for something darker. And there he would read the letter in his pocket another dozen times. Hoping to unlock the key to holding onto the illusion as long as possible.

Even while, deep down, he knew – his days of hovering above the world were numbered.

Tell Me True is currently available in digital format only: 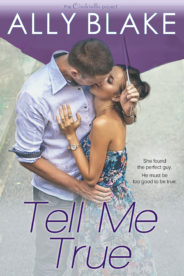