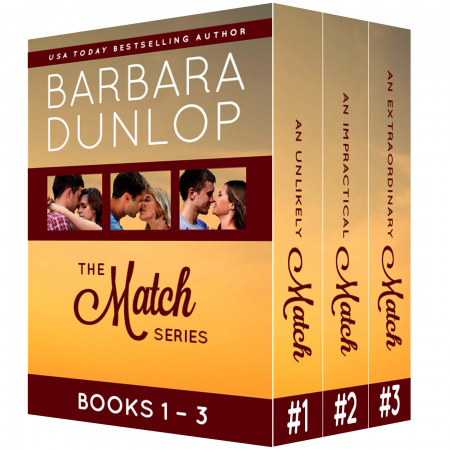 Part of the The Match Series series

An Unlikely Match by Barbara Dunlop

Morgan Holbrook has a PhD in jet propulsion, a plum research position at CalTech and a sexy, new neighbor who is way out of his league. He’s got all the confidence in the world where it comes to applied physics, but he’s never been the guy who gets the girl.

Cheerleader Amelia Camden has sworn off boyfriends, focusing instead on her budding acting career. But when her nerdy, next door neighbor passes up his high school reunion, party enthusiast Amelia is determined to change his mind.

Wanting his former classmates to appreciate Morgan the way she does, as a brilliant, compassionate, engaging man, she goads him into a haircut, a great suit and a pair of contact lenses. Morgan plays along with the sexy Amelia. Who wouldn’t? But when her flattery turns to flirtation, he knows it’s all part of the act.

An Impractical Match by Barbara Dunlop

High end event planner Jillian Korrigan is very publicly left at the altar by the favored son of a prominent DC family. Determined to discretely weather the storm, she finds herself with an unlikely assignment planning a motocross race at the Desert Heat track near Phoenix, Arizona.

Vintage car restoration artist Devlin Camden is at home on the motocross track, dust in his eyes and dirt in his hair. He’s met women like Jillian before, eye-candy on the arms of multi-millionaires. They peer down their aristocratic noses at the guy who customizes their extravagant cars.

But Devlin is loyal to Desert Heat, and making nice with the woman means upgrades to the track and a windfall to the owner. So, he’ll put up with the sexy, snooty Jillian, and maybe even talk her into his uncivilized bed.

An Extraordinary Match by Barbara Dunlop

For float plane pilot Logan Edwards, life is laidback and predictable in Mirror Falls, Colorado, the mountain resort town founded by his bootlegging ancestors. Flirtatious tourists, a close-knit family, and the occasional adrenalin-filled search and rescue call-out are all a man could possibly want.

When workaholic, computer security specialist Jade Korrigan is forced on a holiday in Mirror Falls, within hours, she’s antsy and uptight and looking for a way back to New York City.

Jade’s holiday goes from bad to worse, when she finds herself mysteriously framed, accused of stealing from the Edwards family and tossed into the Mirror Falls jail. Her only possible salvation is rough and ready Logan Edwards, his float plane and his remote cabin getaway. But Logan’s loyalty to his family is ironclad, and he’s not about to let the devious, sexy Jade get under his skin. 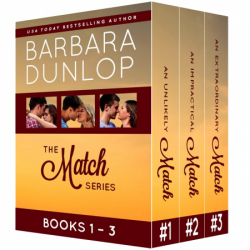 The Match Series: Books 1 – 3 is currently available in digital format only: 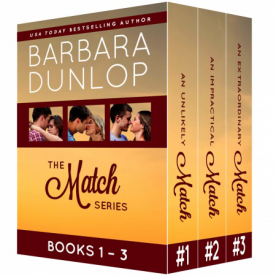