A Bride for the Texas Cowboy

She names an impossible price…

August Wolf is back home on his family’s Texas ranch for good this time, and he has a lot to prove. He’s taken his inherited portion of the ranch as far from the family’s famed longhorn legacy as possible, but a devastating accident throws his plans and his life in jeopardy. August doesn’t have the word ‘quit’ in his vocabulary even when he has to reach out and beg for help from the woman least likely to answer his call – his furious and broken-hearted ex.

Last Stand is the last town winemaker Catalina Clemmens wants to return to, and August Wolf is the last man she wants to see. And work for him? Never. But when an injured August stands before her and begs, Cat sees a chance to finally have some closure on their long, fraught history, the soul searing lust and her love that still burns brightly. She names a price she knows he’ll never pay.

But August says yes… and then he ups the ante

Catalina Clemmens hated pink. She especially hated wearing pink at weddings. And as a bridesmaid, she’d worn various shades of pink over the years at a lot of weddings. Today was likely the last time. She’d run out of friends. Her friends from high school had been few, but predictably in a small town had all married years ago. Same for her college friends. She didn’t have many close work friends as she changed jobs often, but Jenny had been her last single partner in crime.

And Simon had been promoted yesterday, taking Catalina’s job as cellar manager of Erratic Rock Vineyard after she’d been fired, which made today’s wedding all kinds of awkward.

The Willamette Valley, Oregon wine industry was incestuous and tricky to navigate at the best of times. Jobs weren’t so hard to get, but Catalina didn’t find them particularly easy to keep.

She had enviable skills. Encyclopedic knowledge of winemaking and experience around the world. Her palate was unparalleled. No one worked harder. But diplomacy—not so much.

Her big mouth and strong opinions earned her no favors in an industry still bursting with toxic masculinity and competitive egos—not those of the winemakers so much as the new big tech, pharmaceuticals and petroleum titans. These new players had descended on the bucolic Willamette Valley bursting with bank and arrogance and looking to spin an elegant and glamorous fantasy into a reality that wasn’t buffeted by the capricious whims of Mother Nature.

Good luck with that!

But no one wanted reality to intrude. These owners and CEOs never expected to be told no or that they were wrong. Catalina left the crowded, boisterous room with the pink and gold paper lantern lights hanging from the ceiling and walked out on the back deck overlooking a sprawling vineyard that spilled down a hill and stopped just a few dozen yards from the Yamhill River.

The quiet of the night, and the cool breeze off the Van Duzer Corridor that made this site and many others so ideal to grow the famed but finicky pinot noir grape, released some of the tension that had been building all week.

She’d made her toast.

She’d happily skip that and be home and in bed before the damn bouquet was tossed.

A primitive and humiliating ritual.

And wrong for her as maid of honor to skip.

But what was worse—embarrassingly worse—was that Catalina wanted the dumb dream. The husband. Kids. Home with a garden bursting with herbs, vegetables and fruit trees. She even wanted goats she could milk and she wanted to make artisan cheese she’d serve her fantasy family—maybe even sell the extra at the farmers’ market. Or barter. She wanted to cook nourishing meals for her family. Volunteer in their schools and run carpool to different sports and activities as her children followed their passions.

She wanted all the things she’d never had growing up.

And tonight was not the first night she was scared she’d never have it.

She tried to swallow around the lump in her throat. Her eyes stung, and she blinked them furiously as she willed the stupid tears back to the depths of her bruised soul. She wasn’t yet thirty-two. She still had plenty of time. But she also had so much she still needed to accomplish to build the life she wanted, especially as it seemed that each step forward resulted in two steps back.

And she’d been dealt another one-two punch this week. On Wednesday, she’d caught her so-called boyfriend, Josh Stevens—more of a convenience to fill up the huge ball of loneliness that seemed to have swallowed her heart—balls deep in her intern against a nicely aging barrel of chardonnay from the Annaleigh block.

That slap to her self-esteem along with losing her job should have upset her far more than both events did.

Josh hadn’t made her feel part of something. He’d just reminded her of what she was missing. And her job had bored her further because she could do it in her sleep, and she hated being relegated to one area of the wine business.

She wanted to be her own boss, but the handful of ‘orphan vines’ acres she’d cobbled together and tended on her own dime to make her own wine were not nearly enough to support herself.

She litanied all the reasons she should celebrate herself instead of feeling discouraged in her pink bridesmaid dress, alone, unemployed, and about to be homeless.

Catalina mentally gulped. There was no avoiding that voice or that command.

Two women swept down—Betsy Highland, daughter of a famed winemaker, and Jessica Santos, one of the youngest head winemakers in the Willamette Valley—seized her and dragged her to the front of what was not even a crowd.

Jenny was drinking from her flute of bubbly. Her husband’s arms were around her and his face was buried in her neck. They swayed even before the music started.

“This time next year I’m going to be dancing with one of the funniest, awesomest, sarcasticest, best damn up-and-coming winemakers in the valley. I don’t care what anyone else says.” Jenny held her flute high, and shimmering pale gold droplets splashed on her hand and dripped down. She laughed and licked at her hand as Simon leaned down and opened his mouth as if he too wanted to drink from her spill.

Catalina rolled her eyes and kept the smile pasted on her face. Why was speaking her mind something to earn her a nickname like she was some kind of raging warrior? Why was devotion to her craft something she got fired for?

OK, she could have been more polite, subtle—whatever—when pointing out how the head winemaker was screwing up epically. But diplomacy and tiptoeing around egos was not her style.

“Oh yeah. I’m going to be dancing with a huge baby bump at her wedding.” Jenny pointed at her with a swooping motion that seemed particularly accusing. “This time next year,” Jenny reiterated. “I’m calling it.”

And then she did a mic drop and mimed an exploding sound with her hands.

Jenny and Simon launched into an uncoordinated grind, and something she dimly thought she’d heard called “flossing,” and then Simon was dabbing, and Catalina was sure he’d poke Jenny in the eye. And all of this accompanied an Ed Sheeran song titled, she thought, “Perfect.”

Maybe she didn’t want to get married.

Head high, Catalina swept out of the beautiful event space of the Willows Winery. She dropped the bouquet on a startled waiter’s tray and, snagging her purse, she pushed through the double doors into a blustery, rainy Oregon early spring day.

Naturally, it had started raining.

Definitely wise to ignore that.

She was not going back into that shark tank when she’d become the chum. Not even for Jenny, who had been the only one to stick by her. She’d told Jenny she had a job interview later so she’d leave the wedding early. A lie. But it was as much for Jenny as for herself. Jenny worried about her.

No need. She was fine. Absolutely fine. She grit her teeth and glanced at her phone.

Why the hell was August Wolf calling her?

The only man she ever…best not to go down that path. The last time she’d seen him four years ago she’d hurled a bottle of Roshni Pinot Noir estate reserve at him. He’d dodged—like she’d really been trying to hit him—and then he told her to “calm down.”

So she’d hurled another bottle, closer this time. Screamed at him to get out. And then she’d picked up a third. Not really fair since Roshni was a client and the wine wasn’t hers to destroy, and it had recently earned ninety-four points at a prestigious judging, and the owner had basked in all the accolades and given her a raise and signed another contract.

But August had received the message.

Fifteen years of friendship, six years as lovers with one breakup in the middle was officially and forever over.

Still, as she hurried down the path through the rain, needing an outlet from the thump, thump of the DJ’s wedding playlist coursing through her veins, she pushed the green circle.

“Unless you’re dying, the answer is no.”

A Bride for the Texas Cowboy is available in the following formats: 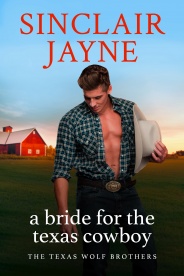 Did you know that A Bride for the Texas Cowboy and many titles are available digitally from Tule's own bookstore? Check it out!