The Brides of Blossom, Texas, Book 2

The Brides of Blossom, Texas, Book 2

Can sweet and spicy make for a delicious pairing?

When barbecue food truck owner Holt Collins caters a wedding at the romantic wedding venue Falling Blossoms, he meets a woman who throws him for a loop. She may be gorgeous, but they clash immediately. He did however love the venue and makes an appointment to show it to his fiancée, only to receive a break-up text.

Devastated, Holt spends a few days trying to figure out what went wrong and what to do next. He decides to grab a bite at a local cafe, unaware that it is owned by Kayla Burton. After telling Kayla he’s no longer engaged, he later finds her kitchen in crisis and Kayla desperate for help, but unwilling to ask. He steps in and saves the day, but she hates giving up control of her kitchen, much less her heart. She’s attracted, but he’s just been jilted. Is this a rebound fling or fate working its magic?

“He’s back.” Kayla Burton held her phone between her shoulder and ear while she scanned her laptop screen. All around her, the Falling Waters Café hummed with customers ordering coffee and baked goods. The perfect early fall weather had brought people out and about to stroll through the Hill Country. Strolling made people thirsty and hungry, so she welcomed the pleasant weather.

She’d been having a good morning until he’d walked in.

“Who’s back?” Mona Perez asked. “That plumber you went ’round and ’round with last week?”

“No, he fixed the dishwasher, so we’re on speaking terms again,” Kayla replied while she smiled at customers and checked the screen for supplies. “It’s that annoying Hog Heaven Man.”

Mona chuckled in her sultry way. “Oh, you mean Holt Collins—the man who got under your skin last spring at the Johnsons’ anniversary party? I loved his brisket tacos so much. Did he bring his barbecue truck? Please tell me yes.” Mona had a point. Hog Heaven Barbecue outranked every other joint in the Hill Country, but Kayla wasn’t ready to shout that to the world.

“No, silly. He’s back without his truck to look over Falling Blossoms now that the renovations are almost done. I’m guessing he still wants to get married here.”

The big Victorian mansion in the center of Blossom, Texas, had undergone some major updates and a complete remodel since spring. The owner and Kayla and Mona’s best friend, Sarina Gabriel, planned to marry Drake Dunmore there in a few weeks. Drake had come to town to buy Falling Blossoms so Dunmore Developments could build swanky condos on the vast property. Instead, Sarina had decided to keep the estate and the man. Drake had started renovations almost immediately after he’d proposed to Sarina. The mansion had been given a facelift, and now the house was on the Texas Historical Commission as a historical site.

A happy ending for all.

“Did he bring his fiancée?” Mona asked, bringing Kayla back to Holt Collins and her own ringless finger and pathetic love life. “Because things work that way, you know. They both need to be here, and you’d think she’d be excited to come now that the house is almost finished with renovations.”

“No, she’s not with him—probably meeting him here for the weekend. Only, he’s been sitting in the corner staring at his phone for ten minutes. I think he might have turned to stone.”

“No, not a word. Not even to tell me how to scramble eggs.”

“Go freshen his coffee and say something snarky. That’ll do the trick.”

“You’re right,” Kayla said, her gaze moving over the frowning man in the corner. His hair was a hot mess of curls, and he looked different. Frazzled but hunky. “I’ll see if I can irritate him back to life.” Then, she whispered, “By the way, he has a beard going on. Makes him look even scruffier.”

“A long beard or a thick beard?”

“A five o’clock shadow kind of beard,” Kayla replied. “As if he forgot to shave. Just enough to make him mysterious.” She didn’t dare tell Mona she liked the beard. A lot.

When she’d been forced to co-cater with Holt Collins at the last minute during the event earlier this year, Kayla had disliked him on sight. Despite being too handsome for his own good, the man did know his barbecue. He had a cult following in San Antonio, and he’d come highly recommended by Drake Dunmore, whom she had also hated on sight. Until he’d fallen for her friend, and he’d proven himself worthy.

She had issues with good-looking strangers.

But Holt Collins had topped the cake with his Texas-sized ego and enough swagger to cause an earthquake of feminine woe. For some reason, Kayla stopped now and then to not so fondly remember how they’d argued about everything from cilantro—she hated it, and he loved it—to Tex-Mex to filet mignon and New York cheesecake. But he’d also talked about his girlfriend, and he’d stayed on the phone with the woman a lot. Apparently, his woman wasn’t sure where they should get married.

He, however, liked Blossom and the Falling Blossoms Inn as a venue. Maybe because his friend Drake had been so impressed he’d decided to save it and fall in love with her friend.

Kayla didn’t want to think about a man who was so unavailable, but there he was, sitting in the corner like a marble Adonis waiting to be brought back to life. It would be rude to ignore him since they were both in the food business, and they’d actually worked together that one time.

She didn’t know why he got to her. Did she resent him and his success, or did his presence bring back bad memories for her? Probably both.

Maybe she resented the stormy-eyed chef because he’d traveled all over the world, and he’d learned from the best of the best. He’d even worked in New York City. All the things she’d wanted to do and more, but she’d given all of that up to come home to Blossom and take over the family business. Falling Waters Café was thriving now, thanks to her hard work and to Sarina coming home to improve on Falling Blossoms Inn. The inn worked in conjunction with her café and Mona’s Falling Leaves Boutique. They were booked solid through Christmas, and Kayla would be catering a lot of the bookings. She had big plans to expand the catering section of the restaurant, but that would have to wait. It would involve a big loan from her friendly Blossom bank.

So why had Mr. Hog Heaven shown up to ruin her good mood? He’d walked in thirty minutes ago to ask her assistant Cate Berkshire for a big cup of black coffee. Then he’d sat and checked his phone without taking a sip. It looked as if he couldn’t take his eyes away from the screen.

She had to taunt him a little bit, right?

Checking her messy bun in the mirror behind the long counter, Kayla straightened her bright blue apron that stated “Cupcakes Make Everything Better” and headed over with a fresh pot of coffee toward the gloomy-looking man in the corner. “Need a refill?” she asked pointedly while she eyed his full cup.

Holt lifted his gray eyes to her, and her heart did such a shimmy-shake she almost dropped the coffee pot. A crime, how much this man gave her such jitters. Chalking that up to professional jealousy, she tamped down her inner tummy roil and gave him a sassy grin. She’d been down the jealousy-on-the-job trip before. Never again.

Standing and staring her in the eyes with a soulful lost blankness, his spicy scent reviving the shakes she’d calmed, he simply said, “No.” Then he dropped a five on the table, pushed past her, then headed out the door.

Cate walked up and shook her head, her angel-winged rhinestone ear-wraps sparkling against her short dark curls. “That’s a first. That man left you speechless.”

Her friend was right. Now it felt as if she’d been turned to stone.

Holt walked along the path that would take him back to Falling Blossoms Inn, his head throbbing with each beat of his broken heart. What should he do now? Go back to San Antonio? Go to his parents’ ranch out from town and confess all, then hide there for the rest of the week? A week he’d managed to take off for this important trip?

Or should he turn around and apologize to Kayla Burton for being so rude?

It wasn’t as if they knew each other. They’d been thrown together catering an event here at the inn, but they didn’t get along. Still, he had to smile. The woman had kept him on his toes, and she’d given him as much as he gave.

Refreshing. She’d been a refreshing change from what he’d grown used to by being in a relationship that had obviously had as many holes as a sieve.

He whirled to go back to explain to Kayla when a flash of blond hair and miles of legs ran smack-dab into him. It took his breath away. She smelled like sugar and flowers, but her sky-blue eyes flashed with feminine fire.

Grabbing her to keep them both from toppling over, he gave her a surprised stare. “Kayla?”

Pulling away with a pretty pout, she retorted, “Holt?”

“I’m sorry,” he said, his voice scratchy. “For walking out earlier.”

“Yeah, well, you do owe me an apology.” She stood back, her arms crossed against her midsection in a protective stance. “But I have to admit, I was being my usual annoying, nosy self.”

“Oh, and here I thought you really wanted to refill my coffee cup.”

“I did. But after you were so rude, I also wanted to throw the whole pot in your face. Are you always this surly in the morning?”

Did he tell her the truth or keep being surly? Remembering how they’d sparred the first time he’d met her here, Holt put his hands in his jeans pockets and focused on the big Victorian-style house up the path. “I’ve got a lot on my mind.”

“Yeah, getting married. A big step. Too big for me, obviously. But you—you’ve got this. And your bride will love this place. Remember how pretty it was that night in the spring with the jasmine and gardenia, the magnolias, and the water flowing? I hope you plan to bring your girl to Drake and Sarina’s wedding. Fall weddings are pretty, too.”

“Stop,” he said, the pain in his heart making him panic. “Just stop.”

“Okay, grumpy,” she said, disappointment in her eyes as oak and sycamore leaves fell around them in a hushed dance. “For a man who’s about to get married, you sure don’t seem into the details of the wedding.”

He raked a hand through his hair. “That’s because there isn’t going to be a wedding.”

Cooking Up Trouble is available in the following formats: 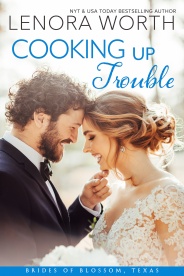 Did you know that Cooking Up Trouble and many titles are available digitally from Tule's own bookstore? Check it out!