The Maidens of Marbury, Book 2 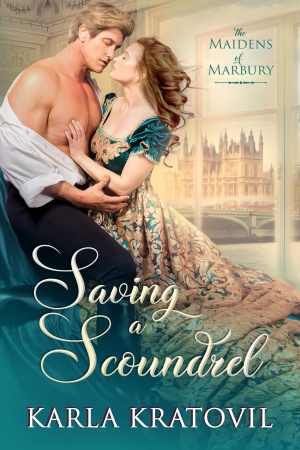 The Maidens of Marbury, Book 2

The death of a friend leads the cautious Eleanor Spencer to reevaluate her life. In a rare impulse, she kisses the man of her dreams—her best friend’s older brother. The moment of madness gives her courage to take more chances. This spring, she will finally travel to London for the social season. All she needs is to compile a list of adventures to complete. At the top of her list? Kiss Lucius Grisham again…

Barely surviving since his father severed his funds, Lucius Grisham works two respectable jobs, and one decidedly disreputable job, just to keep up critical appearances. When Ellie becomes the target of a sordid bet made by his rakehell friends, Lucius must step in to protect his sister’s friend. As he finds himself pulled into helping Ellie with her list of adventures, he is surprised to find his jaded heart tempted by the innocent beauty. But Ellie Spencer is far too good for a scoundrel like him.

Ellie will endanger both her heart and her virtue to make Lucius hers. Can Lucius become the man Ellie believes him to be?

Eleanor Spencer wrapped her friend Olivia in a tight embrace as her friend wept against her shoulder. She rubbed soothing circles on Olivia’s back because there was nothing she could say to fix the situation. No words that could erase the grief. So she stood with her feet braced and her back strong and tried to absorb some of her friend’s sorrow.

Ellie glanced up as the door opened. Three other women came into the small chamber. Charlotte, Susanna, and Sophia quickly surrounded them. Charlotte wrapped her arms around them both, Susanna patted and clucked soothing nonsense, and Sophia handed Olivia an embroidered handkerchief. The Miss M’s always showed up for each other.

Olivia’s tear-stained face lifted, and she reached for the handkerchief with a loud sniffle. “I’m so sorry. I thought I could make it through this morning with some composure.”

Ellie smoothed back the hair from Olivia’s brow. “Don’t you dare apologize for your feelings. We are here for you, whatever you need. Even if it’s just my shoulder to cry on.”

Olivia’s husband’s sudden death had devastated all of them. Vibrant, good-natured Henry had been the perfect husband. Easy to get along with and independent. He had spent much of his time in London but knew his wife preferred the country and never insisted she come and entertain for him as so many ladies of the ton must do. Whenever Olivia needed him, though, Henry would come running. The two of them had been the best of friends since childhood.

Ellie brushed away her own tears. Poor Henry had died in a terrible carriage accident last week. His body was brought home to Marbury to be buried in the family plot. He had no other family other than his wife, and they had no children. What would happen to Olivia now? Ellie tucked that worry away for another time.

The door opened once more, and her father swept into the room. His black vestment swirled around his legs. Edgar Spencer exuded the calm, serious demeanor one would expect from a man of the cloth. His gaze traveled over the ladies, landing on Olivia, taking stock of her red-rimmed eyes and splotchy face. “Do you need a few more minutes, my dear? I think most everyone is seated.”

Olivia pulled in a deep breath and straightened her shoulders. “I’m as ready as I will ever be.”

Ellie paced back and forth in front of her mother’s gravestone, pulling her cloak tighter around her to stave off the cold wind. She’d sat quiet and still during the ceremony, Olivia’s hand held tight in hers. But the more she thought about the carriage accident and how life was so fragile, this terrible feeling of disquiet began to grow. She thought if she came to see her mother, it might ease this terrible tightness in her chest.

Most of the guests had conveyed their condolences and dispersed. Across the churchyard, Charlotte and her husband Daniel stood deep in conversation by a large oak tree. Then her friend wrapped her arms around him. Daniel’s forehead dropped to his wife’s shoulder, and she smoothed her hand over his hair and down his back. Everyone dealt with death in different ways. How nice it was to have someone to console you when you needed comfort.

She turned on her heel and paced back in the other direction. She had no such person in her life, and it was entirely her fault. Cautious to a fault, she took comfort in her routines, her small but safe universe. Ellie blew out a long breath. Who was she fooling? She was a coward. She had never left Marbury. She only traveled to faraway places through her books. She never disobeyed her father. Well, that wasn’t entirely true. She had danced all night at Charlotte’s betrothal party last spring. She loved to dance. Her father disapproved of unmarried ladies dancing with men they barely knew. Ellie sighed. The Reverend Spencer disapproved of many things.

She ran a hand over the top of her mother’s headstone. Perhaps if her mother had still been around to deflect her father’s lectures and disapproving looks, Ellie would have grown up with more courage. The kind of courage that led the heroines in her books straight into adventure and love. It’s not that she didn’t know love. On the contrary, she had tumbled into love at the tender age of fourteen. Perhaps if she weren’t such a coward, she wouldn’t have spent the last ten years pining for her best friend’s brother.

“Ellie, what are you doing out here? Except most likely freezing your fingers and toes off.”

She spun around to face the owner of that deep voice. Charlotte’s older brother Lucius Grisham stood a few away, his blond hair whipping around his face. He held his bare hands up in front of his mouth and blew warm air on them. His green eyes twinkled with good humor. Ellie blinked slowly twice. Had she conjured him somehow just by thinking about him?

Frowning, she pointed to the pocket of his jacket where his gloves peeked out. “Why don’t you put on your gloves, you foolish man? And where is your hat?”

Lucius glanced down and then grinned. “Oh, yes, I forgot those were there.” He pulled them out. “That doesn’t answer my question. What are you doing out in this cold pacing back and forth like a madwoman?”

“Just thinking, I guess.” She glanced down the hill to where a man she didn’t recognize was helping Olivia into her carriage. “Do you know who that is? The man with Olivia?”

Lucius turned. “A good friend of Rivenhall. I’ve seen the two of them together in town often enough.”

The man climbed into the carriage with Olivia. How odd, Ellie had never met Henry’s friend before. After the carriage rolled away, the churchyard was quiet; anyone left having taken refuge back inside the church. Ellie turned back to her mother’s gravestone. For once, Lucius seemed content to be quiet, and Ellie appreciated his company.

Emily Spencer had been kind and graceful. She loved to sing and give hugs. When she was a child, Ellie danced and danced while her mother sang. Her mother died when she was twelve years old. With her death, so much of the joy in their family died with her. Her father stopped laughing and playing the piano. There had been so many rules; rules to keep Ellie safe, rules to follow to become a proper young lady. Would she have become a different person if her mother still lived? Would she be bolder, more confident?

A gust of wind rustled the flaps of her cloak, and she shivered. Lucius stepped close and wrapped an arm around her shoulders. His body blocking most of the wind. “What are you thinking about, kitten?”

Ellie grimaced at her childhood nickname. Lucius was the only one that still used it. The silly moniker just proved how he still viewed her, simply as a childhood friend. She sighed. “How life is too short for some. How if I died tomorrow, I would look back and see that I’ve not done anything with my life. Just existed from day to day, but I never chased any of my dreams.”

“Hey now, that is some heavy thinking.” He squeezed her shoulder. “It’s never too late to chase your dreams. At least, I hope not. Otherwise, my life will have been a waste as well.”

Ellie turned to face him. His hand dropped to rub up and down her back.

Lucius’s lips quirked up into a wry smile. “Don’t be so hard on yourself, Ellie.”

She stared up at his familiar face. Her gaze traveled over his elegantly arched eyebrows, green eyes, a long straight nose, and that square jaw. All parts that should be entirely ordinary, but she’d loved his face for an eon. She thought him impossibly handsome. Not that he would ever know.

Her first instinct was to step back with a clever, self-deprecating quip. But Ellie shook off that instinct. Not today. Today she would take a risk. She was twenty-four years old and had never kissed a man. Olivia was the same age and had been married and widowed already. Ellie had waited years for Lucius to be her first kiss, but she would wait no more. She slid her hands up and grasped the lapels of his wool coat.

Those green eyes widened, and one eyebrow rose in question.

Gathering her courage, she rose on her tiptoes and pressed her lips against his. She had no idea how to kiss someone, but his lips were warm despite the cold, and she found kissing him to be quite pleasant. Ellie tilted her head and brushed her lips across his again. His hand at her back stilled. She dared to glance up and meet his startled gaze. But, oh Lord, what was she doing? Ellie pulled back fractionally, her eyelids fluttered closed in embarrassment.

Then the hand at her back flexed, and Lucius pulled her hard against him. His other hand rose to frame her face, and he kissed her. Really kissed her.

A pulse of pleasurable heat raced through her as his lips caressed her own. The tip of his tongue ran along her bottom lip, and Ellie’s lips parted at his wordless request. He changed the angle of the kiss, his wicked tongue tangling with hers. Ellie was no longer cold, nor confused, nor sad. There was nothing but the heat of his kiss and his intoxicating scent of lemon soap and tobacco.

His thumb gently rubbed across her cheek just before he pulled back. He leaned his forehead against hers. “Well, that was a surprise.”

Ellie opened her eyes slowly. She wanted to savor the last moments of her first kiss before she had to face what she had just done. She had kissed Lucius Grisham! It had been everything she’d dreamed it would be. But now, Lucius looked down at her with soft concern.

All of her breath left her body in one long whoosh. Her face was on fire. Lord, what had she done? What could she say to him? Panic fluttered in her throat, and like the coward she was, she turned and fled across the frozen churchyard.

Saving a Scoundrel is available in the following formats: 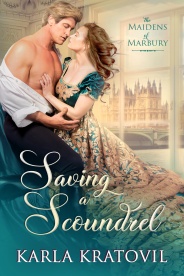 Did you know that Saving a Scoundrel and many titles are available digitally from Tule's own bookstore? Check it out!