Guardians of the Isles, Book 3 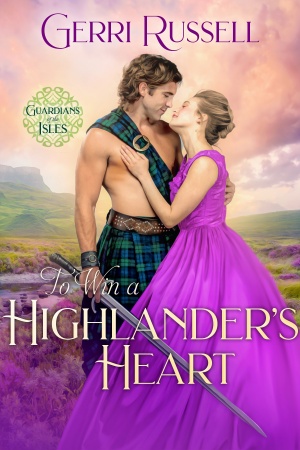 Guardians of the Isles, Book 3

To Win a Highlander’s Heart

Orrick MacLeod is a famed Highland warrior from a powerful clan who can no longer fight. Painful memories from battles plague him when he raises his sword, and he fears that one day he’ll hesitate and he, or one of his brothers, will perish. Leaving his castle to thwart his battle hero destiny, he stumbles across a young woman. Rumors whisper she’s born of fairies, but Orrick only sees a beautiful woman in jeopardy.

Isolde Nicolson is a devoted daughter of her clan, but when she rejected her chieftain brother’s choice of a cruel husband by striking her brother with an arrow, she’s banished. The kindly Orrick shelters her in the safety of the MacLeod castle where they soon unlock hidden desires. Orrick wishes to ask for her hand in marriage, but when he tries to do what’s right, everything goes wrong.

As an incident threatens to tear the MacLeod family apart, a pivotal and bloody battle between English and Scottish forces ensues. Soon the warrior who can no longer fight must stand to protect everything he holds dear.

A wild wind swirled across Loch Dunvegan and through the gardens and the woodlands beyond Dunvegan Castle, scattering the mist, leaves, and flower petals as it wound its way back to the Fairy Cave.

From inside the cave’s depths a light flickered and a wisp of breath joined the wind, as Aria forced her way through the thinned veil between the human and the fairy world on All Hallows’ Eve. A portal had opened at midnight close to Dunvegan Castle and Aria would do whatever it took to break free of the fairy realm as the human world loomed before her.

As she struggled, her thoughts turned to the past when her mother, Pearl, had come to the human realm years ago and had met the laird of the MacLeod clan. The two fell in love and had married and she eventually had a son. Even so, the fairy king had called his daughter home after a year and a day of that marriage. Pearl had done as requested even though her heart was broken, leaving her son behind. It wasn’t until later that she discovered she was pregnant once again.

Pearl had returned to Dunvegan shortly after leaving, when her son’s distressed cries had reached the fairy realm. Her child had been left alone in the nursery by his nursemaid. Pearl had hurried back to comfort her young son, singing him a lullaby and wrapping him in a magical cloth that had since come to be known by the MacLeods as the Fairy Flag. The flag was infused with magic that would protect the MacLeods in a time of great need. But the silken cloth could only be used for protection three times before it would return to Fairyland.

Pearl had considered telling Iain Cair that she was pregnant with yet another of his children, but before she’d had the opportunity, Oberon had pulled her back into the realm of fairies.

Eight months later, Aria was born. As half-human and half-fairy, she had tried to fit in with the other fairies. Instead of acceptance, even as Oberon’s granddaughter, they’d called Aria a mixed-blood abomination and tormented her. Her mother had begged Oberon to return Aria to the human realm, but he refused, saying no member of his bloodline would ever again be allowed to walk among humans, even if she were half-human. His enemies would take advantage of anyone outside of Oberon’s protection.

Regardless, Pearl had tried to return Aria to the MacLeods thirteen human winters ago. The then laird’s wife, Janet, had tried to help Pearl and Aria and brought them to see the laird, Norman MacLeod. The chieftain had been enraged at Pearl’s request that he shelter her daughter in his clan, allowing her to grow up with his own human children. Janet pleaded with him to change his mind. After all, the fairies and the MacLeods were not strangers.

The laird had refused, and instead of allowing them to go back to Fairyland, he tried to imprison the two of them, claiming they deserved to live out their days in the darkness of his dungeon. Before his orders were implemented, Janet freed Aria and Pearl from the guards, allowing them to escape.

At that same time, the fairy king had learned they were missing from Fairyland and had used his magic to draw them both back to his realm, along with a human baby boy who was to be Aria’s mate eventually.

Aria’s dream of living amongst the humans, of being treated as kin, had died that day, and a need for revenge against the man who had spurned her had taken hold. She’d carefully planned and plotted over the past thirteen years, hiding herself from Oberon so that he wouldn’t know she was gone from Fairyland this time, and figuring out how to breach the barrier between the fairy and human realms. Today was the day her chicanery would bear fruit, and soon she would make Norman MacLeod pay for ruining her life.

Using every bit of strength she possessed, Aria thrust herself forward until finally, her other-worldly legs stepped into the human realm. A smile touched her lips when she saw that her bow and quiver had been allowed through the barrier with her.

She would have her revenge against the MacLeod chieftain who had refused to take her into his family. The laird’s children, her partial kin, did not know she existed so it would be easy for her to hide until she took measure of the situation at Dunvegan Castle. Aria took a tentative step forward. The coolness of the winter night caressed her cheeks and she breathed deeply of the sea air. She had thought she remembered the scent of the sea from her previous visit, but she had not. The air smelled both tangy and sweet, a subtle scent that had no equal in Fairyland.

Aria looked left then right as she reached the entrance to the Fairy Cave. Others who were not of Oberon’s bloodline had emerged through this portal before her, and now she wondered where they had gone when they did. Did they hide amongst the MacLeod clan? Had they taken other forms in an effort to hide in plain sight?

Aria frowned. She had no intention of hiding. She had come here to hear from Norman MacLeod’s own lips why he had prohibited her from remaining with her partial kin. Then once she had her answers, she would take her revenge on Norman “Wicked Man” MacLeod. Only when he experienced the kind of pain she had endured her whole life would she decide whether to stay in the human realm or return to Fairyland.

Moving down the path, Aria caught sight of Dunvegan Castle. The golden stones of the hulking fortress were illuminated by the moon and the stars above. The structure was fearsome and almost ugly when compared to the palace where she’d been raised. At the same time, it was also one of the most beautiful sights Aria had ever seen. Every stone of the castle had been set by generations of people with her own bloodline. While the MacLeods were recognised as fully human by others around them, there was a mix of fairy blood in every MacLeod since Iain Cair’s son—her brother, William—had been born.

A deep-seated desire for connection rose in Aria but she tamped it down. Now was not the time for sentimentality. Such emotions would only get in the way of her goal. To accomplish her mission, she needed to find a place to hide and watch the MacLeods. Only then would she have the information she needed to exact her revenge.

To Win a Highlander’s Heart is available in the following formats: 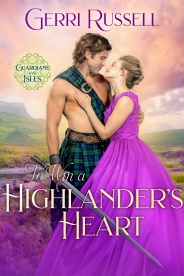 Did you know that To Win a Highlander’s Heart and many titles are available digitally from Tule's own bookstore? Check it out!