Will she be the secret ingredient to his happiness?

Valerie Perry has just inherited her grandmother’s home in Last Stand, Texas, a far cry in the country from her city life as an organic grocery buyer in San Antonio. Her methodical daily routine suits her just fine, so she aims to freshen up the property, sell it, and take her funds back to the city. She’s only got two weeks during her vacation to make this happen. Now is the time to cash in and get out.

The oldest Hutchinson son, who people around town know as “Hutch,” is a third generation local who is poised to take over the family business with his brother, Cole. The barbeque brothers have very different ideas about the future of their restaurant, “The Hut.” Just when he thought his biggest headache was his job, Hutch meets Valerie and both their worlds are upended. He’s drawn to this fish out of water, but Valerie’s time in Last Stand has an expiration date.

Their sweet and saucy styles don’t mix, but can they both find the recipe to a happy future?

Hutch squared off with Cole across a table in the dining area of their family business. Hutchinson’s barbeque market may be an institution in Last Stand, Texas, but the way the brothers had been feuding lately made the restaurant’s interior seem more like a wrestling ring.

Cole splayed his hands wide, stretching each finger before slackening them enough to continue hammering his latest idea. “The entrance of this place is really the problem. If we reconfigure, we’ll be able to draw in more customers and create a positive first impression for everyone who walks into The Hut.”

Hutch pinched the bridge of his nose, sighing heavily as he fought to stay still in his seat. “This is a barbeque market, not a sunroom.”

“But we can make it more welcoming.” Cole edged his crude, two-dimensional sketches across the table, as if forcing Hutch to see them up close would somehow change his mind.

Hutch crossed his arms over his chest. “You’re talking like someone on a Hollywood home renovation show.”

“Maybe that’s what we need around here.” Cole raised his hand to gesture around the dining space that lay empty after their lunchtime rush. “This place is so stuck in the eighties that I hear Willie Nelson songs in my head every time I walk through it.”

Cole blew out his breath in a slow-roasted release.

Hutch had gotten under his brother’s skin. That was where he wanted to be because Cole had been singing this same tune for months and Hutch was tired of hearing it. “There’s something to be said for tradition.”

“We have that. It’s in what we serve.” Cole paused. “But it doesn’t have to be in where we serve it.”

Hutch wasn’t sure if he was hearing Cole right. “We’re staying in this location.” Hutchinson’s barbeque market had been on Main Street, right in the heart of the town for three generations.

“I never said we weren’t. I wouldn’t think of moving from here.”

At least the brothers agreed on that.

“This piece of real estate is far too precious. People know us here.”

And that was Hutch’s reasoning for keeping things as they were. “That’s right. They know us. And they expect certain things.”

“Quality. Value.” Cole wasn’t arguing those points. “But we still have to keep this place presentable. And if we don’t modernize, we aren’t going to grow. People nowadays expect more than what they see in here.”

Hutch didn’t have a problem with what he saw. True, the style was a bit dated. But everything was kept clean and neat. Nothing cried for immediate repair. There were no holes in the wall, no leaky roof, and no cracks in the floor. Hutch uncrossed his arms, relaxing a bit. “This is our family business. And since it’s coming into our hands, we have responsibilities to uphold.”

“Which is why if we just reconfigure the entrance, we can save—”

“We’re not reconfiguring anything.” Hutch fought the urge to stand up and storm off. “The entrance is what makes this place special. It takes every customer right by the barbeque pits.”

The Hut’s pits were legendary. They had been built by hand by Bubba Hutchinson, the boys’ grandfather, as well as their own father. As much a labor of love as market showpieces, those pits were the epicenter of their entire business.

“Nobody cares about seeing those pits now.”

“People do care.” Every day, Hutch watched people light up at the site of where the magic happened. “Maybe you’re just too busy being bent over those pits to see what’s right in front of you.”

“What’s right in front of me”—Cole balled his fist and set it firmly on the tabletop between them—“is years of service smoking the meats that bring people through the doors in the first place. And all I’m trying to do is make those doors a bit grander.”

Cole continued full steam ahead. “Then once we reconfigure the entrance, we can showcase a bigger menu with more options like these.” He unballed his fist to shift the papers that lay between them like an olive branch. He thumbed through the stack and procured a list that Hutch didn’t recognize.

“What’s that?” Hutch reached for the sheet but recoiled as if a snake bit the moment he read the words. “Vegetables?” He nearly gagged.

But the words Hutch read were as dirty as any in a carnivore’s vocabulary. “Corn casserole, brussels sprouts, baby spinach salad, baked artichoke?” Each was more shocking than the previous. He pushed the papers back toward Cole. “What kind of operation are you trying to run here?”

“All your ideas are leaving a bad taste in my mouth.” Hutch swallowed hard.

“Just think about it. Don’t let a first impression sour you on what could be good for business five, ten, fifteen years down the road.” Cole slid the papers again toward him.

“I am thinking years down the road. Fad menu options and trendy interiors come and go. Classic, traditional fare in an atmosphere that people have come to expect is what’s going to matter into the future.”

“I think you’re overreacting to the changes.” Cole removed his hand from the paperwork, placing full custody of the documents in Hutch’s possession. “Take these, and let’s talk about this tomorrow once you have a chance to consider. You owe me that much, considering our share in this business is fifty-fifty.”

Tug-of-war talks and edged compromises might be Hutch’s new life moving forward. He’d always negotiated with Cole growing up, but now with business on the line, their level of negotiation took on a whole new meaning. But compromises in the business world never resulted in a win. Each party gave up something in the process, so it was a losing proposition for both sides.

Maybe he could talk to his parents about changing ownership percentages. After all, didn’t birth order account for something?

Indeed, the more he thought about it, a fifty-one forty-nine split was much more appropriate for older brother versus young brother. That arrangement would lead to far less disagreement when it came to major matters like Cole was proposing, especially if Hutch could be the one on top when it came to final decisions.

“I’ve got some post oaks to cut with Brody.” An eight o’clock meeting wouldn’t give him enough time to finish the early morning job. “Make it nine.” Hutch stood from the table and took the papers.

He had no reason to be frustrated. An hour’s difference shouldn’t matter in Cole’s schedule in the slightest since he’d be saucing and smoking the day’s cuts of meat either way. But Hutch held smug satisfaction that at least they’d both be inconvenienced.

As he turned, he folded the papers and pressed their edges together firmly, relieving as much frustration as he could. But even as he paced away from Cole, tension hung in the air, heavy as grill pit smoke.

On the Market is available in the following formats: 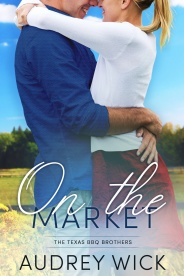 Did you know that On the Market and many titles are available digitally from Tule's own bookstore? Check it out!