NASCAR driver Finn Delaney has cultivated a bad boy image and rakish charm that has served him well on the track and with the media. But now sidelined by a wreck that may have ended his career, Finn feels lost and vulnerable. A quick hook up with sexy military hero Lancey Maverick seems like a perfect opportunity to press his reset button and regain his mojo.

Finn lights more than a spark with his sexy smile and arrogant confidence, but Lancey’s had her fill of boy-men who don’t take life or their responsibilities seriously. She’s only in town to settle her brother’s affairs. A hook up with Finn, no matter how hot, is ill advised. But Lancey’s never played it safe.

Both Finn and Lancey are at a career and life crossroads. A summer fling looks like it could lead to something more, but can Finn learn to stay when life gets hard, and can Lancey learn to trust and accept the feelings of a man who lives in the fast lane?

The Last Stand Saloon was a town institution, the actual spot where the settlers of Last Stand had made their last stand and the locals took a lot of pride in that. The original saloon and bar were still there, along with a bullet that had been fired during the battle.

Coming back to Last Stand felt like a huge step backward to Marine PFC Lancey Maverick. It wasn’t that the town wasn’t nice or that she didn’t have roots here. It was simply that she’d seen herself elsewhere. The Maverick women had a long history of being left behind as their men went out to fight wars, stop outlaws and inevitably never returned. Lancey had always wanted to break that streak.

Yet here she was, in the saloon with her two best friends…drinking too much and for the first time in her life, ready to make a bad decision.

She had made it a rule to stay away from playboys like Finn Delaney. The NASCAR superstar lived his life on and off the track at three hundred miles per hour. He pulled into the pits for a gas-up and tire change during his races on Sundays and she couldn’t help thinking that tonight, at the Last Stand Saloon, he was doing the same thing, only tonight, he was recharging his personal batteries. He was too cocky, too arrogant, but also too damned sexy in his faded jeans, worn straw cowboy hat and smoky come-hither eyes. Finn had dark brown hair that he wore longer on the top and close cropped in the back. His muscled frame filled out the T-shirt he wore and his jeans fit him like a second skin.

She’d been lusting after Finn Delaney since she was fourteen. He’d been sixteen, and driving too fast through town, giving Police Chief Highwater a weekly migraine.

She couldn’t help it. She might be a good girl and a rule follower, but in her secret heart, she’d always wanted to be with one.

But her opportunities were slipping away. She’d returned to Last Stand to share custody and help raise her orphaned nephew, Lane. That didn’t leave a lot of time to let her wild child loose.

Lancey saw him slide into the booth near the back of the saloon, across from her old friend Red Aldean.

She was tired, and really sad. And she just wanted to forget, if only for a few hours, that her life—her perfectly planned, neatly ordered, military life—was ending, and she was about to embark on a new venture in something she was completely unprepared for—raising her three-year-old nephew.

So, when Finn caught her eye and crooked his little finger at her, beckoning her closer to his table in the corner, she decided to go for it, to do something that would make her feel good. Finn was a rolling stone. He wouldn’t want anything beyond a night, which made him the perfect guy to get a little crazy with. He’d leave and she’d settle into her new small-town life, just like every Maverick woman before her. Raising the next generation and living life on her their own terms.

“Lancey, dang girl, you look good tonight. I think I’ve gotten so used to seeing you in fatigues with your hair pulled back that I forgot you were a woman.”

She gave him the finger, took his low-ball glass full of tequila on the rocks and sat down next to Red Aldean, instead.

“I think all that time in the pits smelling gasoline and burning rubber has melted your brain, son,” Red said. “Lancey, you always look fine to me.”

She smiled over at Red who had been in her grade going through school and had been her best friend for longer than either of them could remember. “Thanks, Red.”

“If that was the result you wanted, you should have tried flattery,” Lancey said.

Red spit out the swallow of beer he’d taken, and Finn gave a shout of laughter.

“What’d I miss?” Braden Delaney put another glass of tequila in front of Finn and took a seat. Unlike his middle brother, Finn, Braden wore glasses and had a sophisticated look befitting the COO of Outlaw Tequila. He wore his brown hair in a neat cut that was trimmed in the back and longer in the front. “Lancey, nice to see you.”

“You too,” she said. “Your brother was trying to be charming.”

“Oh, Lancey, sweetheart, when I decide to be charming there won’t be any try. You won’t be able to resist me.”

“I’m not sure how you’re able to race every week. Does that big head of yours fit in a helmet?”

“Dang, girl, I guess you’re lethal. Would it help if I said I’d meant my comment as a compliment?” Finn asked.

“Not particularly, since you pretty much confessed you thought I was a dude most of the time,” she responded, taking a sip of the tequila and settling back in the bench seat next to Red.

The crowd was building even though it was a Thursday night, but that was to be expected in a small town like Last Stand. She’d grown up in town, living in a rented house off Main Street with her mom and her brother. Back then, they’d never have ventured to the saloon since that was, as their devout mama used to say, where all the sinners hung out. But Lancey had lived a pretty straight and narrow life up until this year, and she wasn’t exactly feeling like it had brought her any rewards.

Her baby brother, TJ, and Rose Delaney had been killed back in April in a car crash, along with a friend of theirs, leaving her nephew orphaned. Cal Delaney, the eldest of the Delaney clan, was looking after little Lane, but now that she’d been honorably discharged from the Marines, she’d come back to take custody. Leaving the Marines hadn’t been a part of her plan, but she was the only family that little Lane had left—at least, on the Maverick side—and she wanted to help raise him. Though Lane was incredibly close to his Delaney uncles and to Cal’s fiancée, Amelia Corbyn, Lancey had felt strongly that Lane needed to know the Maverick side of his family as well. She’d had a long talk with Cal and Braden, and they’d been happy to hear she was going to be part of Lane’s life.

“Did you hurt your head in the crash?” Braden asked, turning to look at his brother. “Lancey always looks like a lady to me.”

She smiled to herself. Red Aldean—who owned Red’s Outdoor Outfitters and spent most of his days on the spur of the Pedernales that ran through Last Stand, fishing and charming the tourists with his aw-shucks attitude—and Braden Delaney—COO of Outlaw Tequila—were two of her closest friends. They always had her back, no matter what.

And though she was interested in Finn, she knew a relationship with him couldn’t go anywhere. It wasn’t that she had a ‘no dating brothers of her friends’ rule as much as she had a ‘no dating men who lit out of town faster than the tourist buses at 5:05 p.m.’ practice. Besides, she and Finn were too different. Finn lived life at full speed and she was more of a grunt, marching along with the pack. But damn, the man made a pair of tight-fitting faded jeans look good.

“Shut it, Bray,” Finn said. “I gave her a compliment. She just took it wrong.”

“Try it again so I can be the judge of that,” Braden said.

Finn suddenly looked like he wanted to start something with his brother. For some reason, Finn had always been the Delaney who settled things with his fists. They’d all been surprised when he had started driving go-carts and winning races, but it seemed that speed settled some of that aggression deep in his soul.

“Dance with me, Braden. This is a favorite of mine,” she said. Van Morrison’s ‘Brown-Eyed Girl’ blared from the jukebox. “My daddy used to say it was my song.”

Braden slid away from the table, but Finn hopped out, put his hand on the small of her back and nudged her toward the dance area. “I’ll do it. Apparently, I need to prove to you that I’m not a d-bag.”

“I’m not sure the song is long enough for that, Finn,” Braden said.

Finn flipped him the bird. “I don’t know how you can be friends with such a pain in the ass,” he said, turning to Lancey.

“Sweetheart, I have never been confused about that,” Finn admitted, pulling her into his arms and swaying with her to the rhythm.

She put one hand on his shoulder and the other on his hip and moved along with him. She was having fun sparring with Finn, but then, she’d always liked flirting. Normally, she wasn’t the kind of woman to go for a good-time guy like Finn, but tonight, he seemed to be exactly what she needed—someone to let off steam and have a bit of fun with. And if there was anyone in Last Stand who was just about fun, it was Finn.

Full Texas Throttle is available in the following formats: 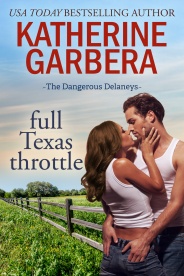 Did you know that Full Texas Throttle and many titles are available digitally from Tule's own bookstore? Check it out!