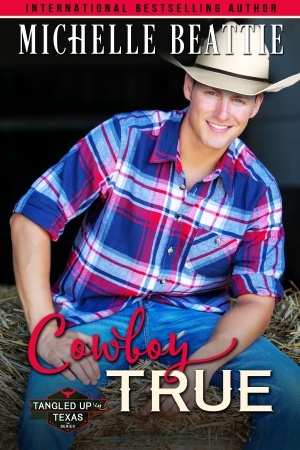 She’s back in his life… and this time he’s not letting go.

Gage Granger knew back in high school that his friend and secret crush was desperate to get out of Last Stand, Texas. But with his roots running deep into the Hill Country soil of his family’s ranch, he couldn’t leave and so made the tough decision to let her go.

When Faith Stone runs into Gage in a San Antonio bar, she’s had just enough to drink to act on feelings that haven’t cooled in six years. And enough sense to flee the morning after. Yet almost twelve weeks later she’s back in her hometown and despite her life-altering news, her plan’s the same—leave Last Stand and its painful memories behind. Faith will never be anyone’s burden or responsibility again.

For Gage, Faith has always been the one. But he’ll have an uphill battle to convince her his heart is true.

When Faith Stone made up her mind, she stuck with it. So, despite her galloping heartbeat and sweaty palms, she kept her foot on the gas pedal. Well, she did slow down when her car crested the hill, but who could blame her? The Texas Hill Country was gorgeous.

Acres of tidy, clipped grapevines marched on both sides of the highway. Wine tasting attracted tourists from not only all over the state but also the country. But the region had more to offer than award-winning wines.

Rolling hills of fields that, even with the bluebonnets done for the year, burst with wildflowers. From the red, orange, and yellow Indian blanket that, at a distance, resembled the kind of woven fabric people paid to buy, to the pink evening primroses and brown-eyed susans. Color abounded.

Fields and pastures from the numerous farms and ranches took advantage of the area’s rich soil. Faith loved seeing the red barns that dotted the countryside and the horses and cattle that seemed content to soak up the sunshine of a warm spring day.

Unfortunately, even the postcard-worthy scenery wasn’t enough to distract her from what was coming. From the inevitable conversation she was driving from San Antonio to have.

Although, in her defense, she’d managed to tuck away her memories of him for the most part. Until that night three months ago, she’d only thought of Gage Granger when she was really tired or lonely, or the odd times when she had a little too much to drink. And, okay, maybe every time she kissed a guy, but she’d managed to move on—mostly.

She’d made a life for herself in San Antonio. Maybe it wasn’t the exciting life she’d lain awake at night envisioning as a child, but it was a good life. She had a full-time job at a nice restaurant on the river walk. She’d worked her way up from waitress to supervisor. She had a little savings and good friends.

And she wasn’t anyone’s damn burden.

Faith shook her head. She’d moved out of her grandmother’s house six years ago. One would think that would be long enough to get over the past. But that baggage just kept hanging around. Like a recurring dream she had where she wanted to go swimming, but no matter how many times she took her clothes off to put on her bathing suit, the clothes just reappeared. Yeah, that was her past with her grandma. No matter how much she tried to shed it, it just kept sticking to her.

Of course, with having to go home for the obligatory holidays and birthdays, it wasn’t surprising she couldn’t let go the past. And it wasn’t surprising it was on her mind today, given that she’d be staying at her grandma’s tonight—and possibly tomorrow night if she chickened out before telling Gage.

“Not going to happen,” Faith said aloud, her voice filling the inside of her car.

And, to prove to herself she was going to go through with it, she pushed the gas pedal a little harder, despite the fact her belly felt like a Rubik’s Cube in the hands of an expert trying to solve the puzzle within seconds. It kept twisting this way and that, up, down, and sideways.

If she’d been smart, she wouldn’t have veered off Interstate 10 onto Highway 87. She’d have gone straight to Last Stand before she made herself nauseous. But it was slower going off the interstate, and though she’d made the decision to do this, she was suddenly desperate for more time.

A decade ought to do it.

She sagged against her seat. She’d get through this, just like she’d gotten through the years living with her grandmother. Then she’d go back to her life in San Antonio.

Hoping that mantra stuck with her once she reached Last Stand, Faith reached into the console and grabbed a random CD. Since her old Camry didn’t have Bluetooth, and she didn’t want to kill her cell battery by running through her playlist, she kept a selection of her favorites in her car.

Pulling out a case, she flipped it open. She fumbled with getting the disc out. It slid from her fingers when it popped free. Glancing over, she caught it before it fell to the floor.

It didn’t take more than a second or two to grasp the disc and slide it into the player, but when she shifted her gaze back to the road, her heart leapt in her throat as a blur of yellow fur dashed out of the ditch.

Faith slammed on the brakes, yanking the wheel to the right. Her car shuddered. The rest was whirling colors and distorted images as her vehicle skidded sideways into the ditch. Dirt and grass scraped her undercarriage. Faith clung to the wheel as she bumped and jerked like she was on some amusement park ride. An ominous thud filled her ears. Then, with one last hard knock against the driver’s door, she lurched to a stop.

For a moment, she didn’t move. She remained still, her eyes pinched closed, while her breathing echoed loudly within the confines of the car. Holy crap. What just happened?

She wasn’t sure how long she sat there, her head leaning against the driver’s window. But when she finally dared open her eyes, her breathing sounded as though she were hyperventilating. Aware the engine was still running, Faith pried her stiff fingers off the steering wheel and turned the key.

The good news was the car hadn’t rolled. And the air bags hadn’t deployed. So the front end, at least, was fine. And, she realized with a shuddering breath, so was she.

Faith released the seat belt and pushed open the door. She took it as another good sign that it opened without protest.

Unfortunately, when she stepped out of the car and put her weight on her left leg, her knee wasn’t as agreeable. A hot stab of pain had her gasping and clasping the top of the door to keep upright.

Balancing on one leg, Faith glanced down at the other. Since she’d dressed in shorts, her knee was easy enough to examine. There wasn’t any blood. No bones sticking out where there shouldn’t be. It must have just gotten a good banging. Kinda like her head. It was throbbing, too.

She had acetaminophen in her purse and a half-full bottle of water in her cup holder. But it suddenly felt like too much effort to reach onto the floor—her handbag had gotten knocked off the seat—and grasp it. Of course, the fact that she suddenly felt light-headed didn’t help any.

Instead of inside the car, Faith dropped to the grass. Sitting between her vehicle and the open door, she bent her right leg and pressed her forehead to her thigh. She smelled the vanilla bean body butter she’d rubbed on after her shower that morning. She concentrated on that to keep her stomach from pitching out the candy bar she’d eaten after she’d stopped for gas.

The odds of keeping it down were swinging in her favor when she heard the sound of an approaching vehicle.

“Please keep going,” she muttered. While she was starting to feel better, she was still shaky and she’d prefer not to deal with anyone, even a well-meaning Good Samaritan, until she felt stronger.

But as luck would have it, the vehicle slowed then stopped. Two doors closed. She heard hurried footsteps rush through the long grass. Realizing they couldn’t see her since the car had ended up parallel to the road with the passenger side facing the highway, Faith lifted her head and called out, “I’m okay.”

She was bracing herself to stand when someone knelt at her side.

Her insides clutched. She knew that cologne. Oh, man, did she know it. Twelve weeks ago, she’d rolled around a bed with a man wearing nothing but that cologne.

Please don’t be him.

Besides, he’d have no reason to be there. It wasn’t as though she’d called 911—or anyone else had since theirs was the first vehicle she’d heard. So, good. Whew. She still had some time before she faced him.

A warm hand settled lightly on her shoulder. “Faith?”

There’d been many times in her life when Faith had wished she could disappear. Just close her eyes and reappear somewhere else, anywhere else. As anyone else.

She’d never wished for it more than she did right then. Dammit. What was he even doing there?

But as much as she wanted to, she had no means of teleporting, and the longer she avoided looking at him, the more of a coward she’d seem.

“Hi yourself.” His gaze skimmed her face. “Are you hurt?”

That was when she noticed he was dressed in his navy EMT uniform. And he wasn’t alone. There was a woman behind him, also in full uniform. Tall, with her long, dark hair pulled back in a ponytail.

Faith didn’t recognize her. As she appeared a little older than her and Gage, either she’d been far enough ahead of Faith in school for their circles not to cross, or she wasn’t from Last Stand.

Regardless, the woman wasn’t the one looking at her expectantly.

“What are you doing here? Aren’t you out of your jurisdiction, county, or whatever?” Faith asked.

“Normally, yes. But we had a patient that needed transporting to San Antonio. We were just on our way back when we spotted your car.”

Wasn’t that just her luck?

While she had no way of knowing if he wanted to talk about that night at all—not that she had any intention of discussing it in a ditch with his partner right there—he was at least gentleman enough not to bring it up when they didn’t have privacy. A knot eased in her stomach.

He settled his arms on his bent knees as though he had all the time in the world. “What happened?”

“I took my eyes off the road for like a second, and when I looked up, this yellow blur came running out of the ditch. I swerved to avoid it, and the next thing I knew, here I was.”

He looked from the open door of her car to her. “You didn’t get tossed out, did you?”

Even before she answered, his gaze roamed over her. While her head knew he was only looking for injuries, other parts of her remembered how he’d once touched her from head to toe. With more than just his eyes. Or his hands. And damn her treacherous body for wanting him to do it again.

Cowboy True is currently available in digital format only: 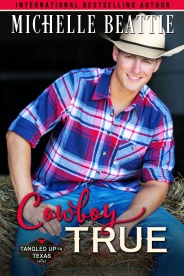 Did you know that Cowboy True and many titles are available digitally from Tule's own bookstore? Check it out!