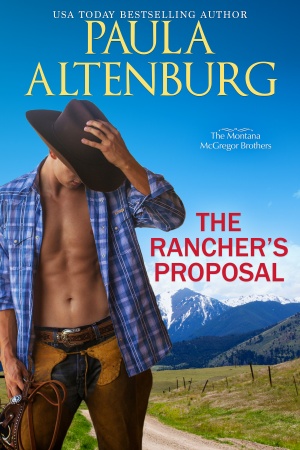 She said she’d never rely on a man again…

Never say never. When meek and mild Posey Davies calls it quits on her toxic marriage, she grabs her two-year-old daughter and runs. Her flight lands her in Grand, Montana, a community happy to take her in and even happier to nose about in her life and her unfortunate past.

The cowboy next door, Zack McGregor, has “good time,” written all over him. He’s only home for a year to help out his older brother, who’s guardian of their sister’s children. Zack is kind, funny and oh-so-easy on the eyes. He’d be perfect, but the practical Posey predicts Zac will disappear as soon as winter sets in.

Zack’s not as laid back and fun loving as he seems. He’s all about family and doing what’s right. When Posey’s deadbeat ex-husband begins making demands, Zack insists on playing protector.

Posey’s never had anyone stand up for her before and soon realizes that perhaps relying on this man and trusting in love is well worth the risk.

The house had good bones.

Posey Davies stood in the middle of the low-ceilinged, oak-beamed living room, with its tall, narrow windows that overlooked the Tongue River, and imagined the built-in shelves filled with books. She had no idea what kind of furniture would best suit the Victorian home, but she could hardly wait to find out.

Late April sunshine warmed the hardwood floors and glittered off dust motes floating in the air. The aroma of lemon polish tickled her nose. She’d already checked out the bedrooms upstairs and the kitchen next to the open dining room area. Any maintenance required was superficial, and work that she and the internet could tackle together.

It wasn’t a large house. Not compared to the one she’d grown up in. But it was all she and Trixie, her two-year-old daughter, would need. The front porch alone had sold her on it. And the location was perfect. The five-acre property butted the bridge that crossed the Tongue upstream of where it fed into the Yellowstone River, only a few miles from town.

So far, what she’d seen of Grand, Montana would suit them just fine. Marion Street Grand Elementary School had an excellent reputation—she’d thought to check on that for the future—and she’d inquired about the neighbors. Liam and Mary McGregor, and their son Jake, ran the Wagging Tongue Ranch next door. Eleanor Fitzpatrick, her former nanny, and the reason she’d chosen Grand, had assured her they were lovely people. Weldon Scott owned the Running River Ranch. He’d take getting used to, or so Eleanor said, but while not the friendliest of men, he made an excellent neighbor in time of need.

Best of all, Grand was two thousand miles from Boston. According to Google, that was thirty-one hours by car and seven hours by plane. It would have to do.

She smiled at the real estate agent who’d accompanied her on the final inspection of the house. Kendall McKinley, a young woman around her own age of thirty, was sweet-faced and friendly. Eleanor had arranged the purchase through Kendall for her, and Posey could see nothing wrong with her choice.

“It’s all yours.” Kendall passed her the keys. Her eyes sparkled with a ton of emotion. “It used to belong to a great-uncle of mine and I loved coming here to play when I was a little girl. I’m so glad it’s going to someone who will appreciate it.”

Kendall chatted a few more minutes, confirming that the people of Grand were indeed as down-to-earth and friendly as Eleanor claimed, then left Posey alone with her newly-acquired home.

Posey pressed her shoulders and spine against the wall in the small foyer. She slid to the tiled floor and rested her head on her folded arms and her arms on her knees. The worst was now over. She’d escaped. Trevor couldn’t hurt her again. Even better, he’d never lay another hand on their daughter. She was ashamed of herself that it had taken her so long to take action. Him shaking Trixie—her baby—had been the final straw.

She’d never known that kind of blinding rage. Hadn’t known she was capable of it. It had brought home to her that he’d been lying all of the times he’d convinced her she’d done something to deserve his anger, because there was nothing her sweet baby could have done to deserve it.

Until she’d seen it directed at Trixie, Posey hadn’t gotten what abuse really was. The money she’d given him—over her uncle’s and her lawyer’s objections—had been money well spent. When it came to her daughter, she’d do whatever it took to protect her.

She lifted her head and wiped her face on her sleeve, then tightened the elastic holding her wheat-blond hair in a high ponytail. From now on, she had to be strong. She had to turn this newly-acquired house into a home. A place for them to heal. There would be nothing but happiness and smiles here. Trixie would never know what it was like to be an unwanted disappointment to the people she loved and who were supposed to love her. No one would raise a hand—or their voice, either—to her.

She surged to her feet. Even though move-in day wasn’t until the first of next week, she should check out the yard while she was here. She knew nothing about plants but was eager to learn. How much fun would it be to dig in the dirt beside Trixie, the two of them learning together?

A glass door off the dining room—soon to be Trixie’s new playroom—led to the garden. Posey stepped out and surveyed it with overwhelmed glee. It was a disastrous tangle of rotting vegetation, unfurling green leaves, and twisted vines. She could hardly wait to get started. It would be her first maintenance project in her very first home.

A woman in her mid-fifties, sporting auburn hair laced with threads of gray that caught the midmorning spring sunlight, rounded the corner of the house. She wore a gray hoodie, stretchy Mom jeans, rubber boots, and a wide, welcoming smile. She swung long legs over a border hedge that hadn’t yet awakened from winter before drawing up short. She was about the same height as Posey, who stood at five-eight.

“Oh my,” the newcomer said, gazing around. Wide blue eyes glowed with dismay. “I had no idea how neglected this place had become.” She pulled herself together and thrust out a hand. “Mary McGregor. I’m your new neighbor. One of them,” she amended. “Welcome to the neighborhood. If you need help cleaning this mess up, I’d be happy to pitch in.”

She added the last with such a warm smile, Posey’s deep-seated suspicion of strangers died a natural death. Who could resist so much charm?

She took her new neighbor’s hand. “Posey Davies. If you could tell me the difference between the plants that are weeds and what I shouldn’t pull, I’d be thrilled beyond words.”

“It all depends on how you want your garden to look and your personal taste,” Mary said. “Some weeds are pretty and underrated. They can add a natural touch.”

They chatted for a few minutes. Or rather, Mary chatted and Posey listened, awed by the sheer number of topics Mary managed to cover in such a short span of time.

“Look at me, talking your ear off,” the older woman said with a laugh. “I wanted to meet you before we head off to the airport tonight, not scare you away. Liam and I”—Liam being her husband, Posey had already been informed—“are off to New York. Our daughter and son-in-law are taking us to Peru for Liam’s sixtieth birthday because he’s always wanted to see Machu Picchu. We’ve never been out of the country, so it’s going to be quite an adventure for us.”

Posey admired Mary’s enthusiasm. Her own travels had involved boring business trips with her father to European cities when he was alive, where she’d been restricted to hotels, shopping, and restaurants. In short, nothing interesting, educational, or especially fun. If she’d stayed home her father would never have noticed. Neither would she.

Poor little rich girl. How many times had she heard that if she dared to complain?

“I hope you have a wonderful trip,” she said sincerely, shaking off the twinge of self-pity. Mary McGregor seemed so nice. “I look forward to getting to know you better when you return.”

“See you in three weeks. We’ll get together for coffee,” Mary said, and then was gone over the fledgling hedge with a wave of her hand.

Posey took a last deep breath of sunshine and rich, damp earth, hardly daring to believe that this tiny slice of Grand paradise was finally hers. She locked the garden door from the inside, then passed through the house to the side door that led to the garage where she’d parked her car. She’d pick up Trixie from Eleanor’s house and they’d go shopping for new furniture in Billings.

The first of the week couldn’t come soon enough.

The Rancher’s Proposal is currently available in digital format only: 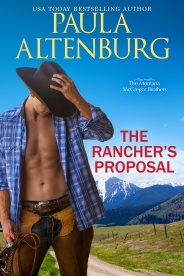 Did you know that The Rancher’s Proposal and many titles are available digitally from Tule's own bookstore? Check it out!