Can they stay alive long enough to save their kingdoms without falling in love?

Kyr, son of the famous warrior, Thalgor, has been tasked to marry the daughter of a warring leader to broker a peace between three clans. Ever the obedient son, he prepares for his wedding only to learn from a slave that his betrothed has fled with a warrior from her own tribe. Determined to save the peace, Kyr sets off in pursuit of the fleeing couple, reluctantly taking the slave with him to thwart discovery.

Ciel has been a slave all her life. She fully expects to be killed when she delivers the news of her missing mistress. Instead she is saved and tasked to impersonate Kry’s betrothed. In the dead of night she and Kyr sneak out of the warrior’s camp hoping to intercept the escaping couple by taking a dangerous route. With each leg of the journey, they are tested. Their survival depends on both of their hard-earned skills and learning to trust. Not easy when both of them harbor dangerous secrets.

This story brings a close to the mystical world of The Witch King trilogy.

Kyr sat motionless on the branch high above the forest floor. The rough bark of the ancient oak bit into his back. Stiff muscles ached for movement, but he was a warrior—or would be one when he got older. Even in a time of peace, pain meant nothing to a warrior. He had to wait, had to know what his future would be.

As the full moon sank, the animals of the night scurried, flapped, or stalked with new urgency in the forest behind him. The perfect witch’s circle in front of him was still and empty, except for the cloak and gown half-tucked under a bush, as if the woman who had shed them was in too much of a rush to hide them completely.

A panther screamed. The hair on the back of his neck stood on end.

Automatically he reached for his bow.

At fourteen, he was a trained archer, only one of many skills he would need to lead his people when his father grew too old. If he could keep his secret that long.

Before he could notch an arrow on the string, he remembered.

Fear, like pain, was part of a warrior’s life.

He released the bowstring and settled back to wait.

The bottom of the full, red moon touched the horizon, just visible through the new leaves of early warm time. A bush rustled at the far end of the clearing. He held his breath.

The panther crept into view, midnight black and beautiful in the fading moonlight—dainty in spite of its size and the muscles that rippled under its fur as it walked.

Awestruck, he sensed the moment when the great cat caught his scent. Green eyes, familiar in the unfamiliar angular face, scanned the forest that surrounded the witch’s circle. The panther lifted its head to sniff the air, but did not look up.

The rim of the moon sank from sight, but the earliest light of dawn kept the night from complete blackness.

The panther fell to the ground. Its body twisted and jerked. Its tail shrank away. Its face softened. Its fur thinned. Claws shifted into hands.

Kyr covered his face with his cloak so as not to see the naked female body that emerged.

When the whisper of clothing rapidly donned stopped, he lifted the cloak and leapt to the ground in front of the startled woman.

His aunt raised her hand and a bolt of heat shot toward him. Without thought, he blocked the blast, sent it back toward her. She caught it in her hands and spun it into a ball of smoke that rose and faded into the rosy dawn sky.

They stared at each other in the dim light, both shocked by what he had done. What he had the power to do.

“How did you stop my spell?” Felyn’s green, slitted eyes narrowed.

“I’m not sure how. I only meant to defend myself.”

“As I sought to defend myself. But blocking my spell was still dangerous.”

“It seems to have done you no harm.”

“Still, think first the next time. It is always dangerous to take a witch by surprise.”

Her tone was so like his mother’s when she scolded him that Kyr smiled.

His aunt shot him a hard look. “The next time,” she murmured. “As if it makes sense that there was a first time.”

He let her puzzle it out, stomach knotted, hand on the hilt of his long knife, as if it could protect him from what came next.

After what seemed a long time, she lifted her eyes to his, green to blue, and finally saw there what no one had seen before.

He lowered his head.

“How is that possible?”

“I do not know. It—It has always been here.” He touched his hand to his chest. “But stronger now than when I was a boy.”

“How did you learn to use your magic?”

“I listened as my mother taught my sisters. I watched you and my mother as you went about your healing. I practiced what I learned in secret.”

“Ah! It was you who started the fire that almost burned down the tent last year. Your sisters all denied being responsible, but no one thought to ask you. Men cannot be witches.” She frowned. “Yet you are.”

He drew a long breath, found the courage to ask. “If I am a witch, can I even be a man?”

He was not able to hide the anguish behind the question.

“You are Kyr. That is enough.”

“For you, maybe, but not for me. I do not know how to be Kyr, to be this thing I am. Witches are forbidden to kill, yet my destiny is to fight and lead. How can I be a warrior if I cannot kill? That is why I am here. I followed you to learn about your curse.”

“What has my curse to do with you? No one even knew until tonight what I become.”

His head jerked up. “Not even my mother?”

“She may. We have never spoken of it. She has more respect for my privacy than you.”

“She is not also cursed.”

She thought for a moment. “A curse—or a gift. Most of all, it is a secret you must keep as I keep mine.”

She drew herself up, suddenly far older than her years. “Because they will kill you.”

The words were both an unbearable blow and something he had always known.

The truth and sadness in her voice echoed in his heart. “I never meant to put you at risk.”

“Of course not,” she said. “But you must promise never to reveal what you are.”

“There will come a time when I must.” Although he could not have said how he knew.

“Yes. In that we are different. But until the time comes for you to become what you are, we must keep each other’s secret.” She held out her hand to him. “Here, in this sacred witch’s circle, in the presence of our foremothers, I swear I will keep your secret, if you will swear to keep mine.”

He clasped her hand as he would have a man’s. They both stepped forward until their joined hands touched their chests.

The worst revealed, the vow made, a rush of emotions he did not understand pushed words out of him in a torrent. “Can you control your curse? Do you like it? Hate it? Have you learned not to care?”

“I have learned it is what I am. I have no choice. Nor have you.”

He pushed the most important words out over the tightness in his chest. “H-have you ever wanted to die?”

She hesitated, then said softly, “Yes, I have wanted to die.”

He stifled a sob of relief.

“Will you teach me how I can live?”

“The answer you seek is in your own heart.” She laid a hand on his shoulder. “You have a rough road ahead of you, but I promise you, Nephew, a life, even one such as yours or mine, is always worth living.”

The Witch King is currently available in digital format only: 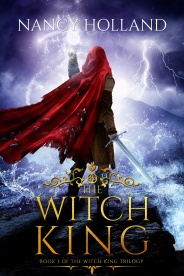 Did you know that The Witch King and many titles are available digitally from Tule's own bookstore? Check it out!