The assignment has a deadline, but does their relationship?

After almost ten years dodging bullets as a foreign correspondent, Asher Brody is struggling to find his place back in the U.K. – and in his family-run newspaper, the London Phoenix. He’s intent on proving he’s as committed as his brothers, even if it means putting on a suit and posh accent to investigate a high-ranking executive at an upscale retreat.

Ada Hunter wasted years trailing her ex-boyfriend, only for him to turn his back when her documentary career finally took off. Now she’s beating her own path, and it’s taking her all over the world. To secure funding for her next project, she takes a risky job with the Phoenix posing as broody-sexy Asher’s fake girlfriend – too good to be true.

They plan to spend a few days pretending to be a couple at a country estate before going their separate ways. But when bad weather strands them in the countryside, temptation develops into something more and the line between fantasy and reality becomes dangerously blurred.

The heavy door clanked open and Ada pushed outside into the cold night, sucking in a lungful of fresh air. The chilly November mist dampened her bare shoulders and threatened the DIY chignon it had taken her thirty-five minutes and several YouTube videos to perfect, but the brief escape from the crowded ballroom was worth it.

A black cab slowed as it passed, and for a second she was tempted. She thought bagging an invite to the UK’s most prestigious journalism awards ceremony would mean a fun-filled evening of black-tie glamour, harmless flirting, and maybe even a lead on a source to raise the final funds she needed for her trip.

Instead she’d been placed on a table with a random assortment of freelancers. As soon as they realised there were no acquiring editors in their midst the conversation died out, and everyone focused on tapping urgently at their phones or draining glasses of free booze.

Typical London journalist crowd. If they weren’t tweeting, they were drinking.

A hand in the air and she’d be tucked in the back of that taxi, zooming home to a cucumber-scented makeup wipe, a cup of mint tea, comfy pyjamas and no bra in sight.

Except her bag and coat were inside. And she was running out of time to raise money. And she couldn’t take another evening watching the couple that had moved into the spare room in her flat cuddling on the couch.

But she didn’t have to go inside just yet. There was still time before the ceremony started. A few stolen minutes in the cold and quiet and she’d be ready to plunge back into the bright lights, the hum of conversation and the cloying scents of too many varieties of perfume.

She looked in the direction of the deep voice. Several feet away a man leaned against the hotel’s brick outer wall.

The dim lights from the street revealed him in fog-hazy impressions. Tall, well-built. Dark brown hair, thick and overgrown and rakishly disheveled. Strong jaw. Slightly too-wide nose. Killer smile. And as she walked closer, ocean-blue eyes fixed directly on her.

“Don’t think so. Though to be fair, I’ve lost track of everyone I’ve been introduced to tonight. Smoke?” He held out an unopened packet of cigarettes.

“Neither do I.” He tucked the packet into the inside pocket of his tuxedo jacket—a jacket he filled out very nicely.

She crossed her arms against the cold and propped her hip on the wall beside him. Even to her relatively untrained, American ear, his accent categorized him as a native Londoner. “Why do you carry cigarettes if you don’t smoke?”

“The ingratiating power of nicotine. A cigarette in the correct hand is more powerful than thousands of pounds in bribes.”

“And what were you hoping to gain with the one you just offered me?”

One side of his mouth lifted in a smile. “Nothing more than a moment’s conversation with a beautiful woman.”

A frisson of excitement fluttered in her throat, but she pitched her voice low and breezy. “Here I thought that was the first step in your plan to charm me off my feet, get me drunk, then drag me into a supply closet and take advantage.”

“Never,” he promised forcefully. “Any and all supply-closet encounters require enthusiastic consent and are subject to pre-closet sobriety screening.”

“Spiritual readiness,” she echoed, unable to resist the smile tugging up the corners of her mouth. “Should I get a letter from my priest?”

“It would expedite the process.”

Flirty and funny—a rare combination. She regarded him steadily for a moment, taking in the long legs, the flat-fronted tuxedo shirt, the confident smile and the combination of cheek and charm gleaming in his eyes.

“Ada Hunter.” She extended her hand.

He ignored it and leaned in to kiss her cheek. The gentle brush of lips was accompanied by his scent, giving Ada the impression of lavender, of water lapping at the hull of a wooden boat, of a warm, golden sunrise signaling the exhilarating beginning of a longed-for journey. She held his lapel to keep him close, breathing deeply.

The words rumbled close to her ear, and as they crystallised in her brain she used her grip on his jacket to thrust him away.

“I knew you looked familiar. I met your brother, Oren. His fiancée used to be my flatmate.” She reassessed the man in front of her, mentally calling up the few times Grace had mentioned her new beau’s younger brother. Foreign correspondent, worked in the Middle East—not much detail, but nothing memorably negative.

Asher’s smile had weakened considerably. “Don’t worry, it’s been so long since I wore a tux that I didn’t recognize myself at first, either.”

“And you’re missing the houndstooth scarf,” she added, thinking of the byline photo that accompanied his articles in the Phoenix, the London broadsheet the brothers had bought to save from closure. “I always thought that was a nice touch. Will the same photo be appearing on the back of the book?”

“Maybe.” He shoved his hands in his pockets and she grinned in surprise.

“Look at that, one mention of his high-profile book deal and he goes all bashful. Are you sure you’re a journalist? Because all the other egos in that ballroom are so overinflated I barely squeezed through the door.”

“Speaking of which, we should probably—”

His sentence was cut off as a muffled chime rang through the door. A window far above their heads was open, and Ada could just make out a woman’s voice booming over the sound system inside.

“Ladies and gentlemen, please take your seats. The ceremony for the sixty-seventh annual British Journalists’ Association Awards will begin in five minutes.”

Ada wrinkled her nose, not looking forward to spending the next several hours smiling politely, constantly aware of the live-broadcast TV camera. Not that your average joe was likely to tune in to a satellite news channel to watch reporters get awards for Best Small-Business News Story, but then she wasn’t trying to raise money from your average joe.

On the other hand, the media investors, foundations, and corporate contributors with the power to make or break her next project would be glued to the screen.

The reluctant, parting pleasantry was half-formed on her tongue when Asher moved past her to open the door and his rock-hard thigh brushed her own.

Heat arrowed up her abdomen with such force she had to check to make sure her dress hadn’t caught fire. She glanced up and down the empty road, oddly worried some passing stranger might’ve seen her flash of arousal, then took another look at the man beside her.

Flirty and funny and hot.

Undercover is available in the following formats: 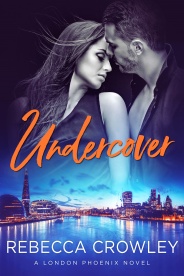 Did you know that Undercover and many titles are available digitally from Tule's own bookstore? Check it out!