When you love something, let it go…

To everyone in his hometown, Matthias Van Allen is a hero. Back from his posting as an army medic, he’s welcomed with a party the whole town attends. Everyone’s happy to see him – except his ex-girlfriend, Raya. First, Raya lost her father, and when Matt joined the army, she was left with no one.

Raya Piacenza‘s used to being alone now. She’s made her way in the world and doesn’t need anyone or anything except her jobs: an EMT captain and personal trainer. But now Matt is back, pushing her buttons in a way she thought she’d grown out of. Worst of all, she’s now his boss.

As Matt settles back into the community and Raya is offered a chance to leave it, they will have to figure out if their lives have room for each other – or if they should set each other free.

Raya had never been this nervous. This was worse than the day she’d found out she’d been appointed captain of Tanner’s first aid squad, the youngest ever to get the position—not without controversy. This was worse, because she didn’t want to be nervous that Matthias Van Allen was coming home. She wanted to feel nothing.

Yet, here she was, at the airport, in a group consisting of Matt’s mother and seven or eight members of the squad, inside another crowd of people waiting for their loved ones. Except she wasn’t waiting for her loved one. She was waiting for Matt, who’d chewed up her heart, spat it out, stomped on it, and then joined the freaking army just to get away from her.

She wished she could just skip this touching reunion, but that was impossible. If she missed any part of it, she’d be labeled as petty, or worse, not over him. Raya had enough to do to keep people’s focus on her abilities, without giving them any reason to see a weakness in her armor. Now that, she really couldn’t stand. She raised her chin and paid more attention to her surroundings. The passengers came into view, luggage in hand or trailing behind their outstretched arms like loyal pets. At lunchtime on a Saturday, most of them were parents with children jumping around them or grumbling in their arms. Raya sighed and tried to loosen the muscles across her shoulders. The rest of her group moved around impatiently, craning their necks to see behind the families. Raya kept her head down.

Suddenly, Dennis yelled, “There’s our boy!” at the top of his considerable lungs, and Raya’s head shot up, as did her heart rate. Cursing herself, she looked from face to face at the approaching passengers until she found him.

Dammit, he was even better looking than he’d been eight years ago. Black hair cut high and tight, though longer on top than she’d have thought the military allowed. Olive skin, dark brown eyes, cheekbones to make her weep, and a smile… goddammit, his smile. He was supposed to look haunted, wasn’t he? He’d seen stuff on his deployments that Raya couldn’t even imagine, but he looked as relaxed and happy as if he was coming back from two weeks in Cancun. He laughed aloud at the sight of his welcoming committee and ran toward them, his pack bouncing on his back.

His mother was calling the loudest, in Spanish and English, and when he’d thrown his pack to one side, it was her to whom he stood still and held out his arms. She disappeared into his embrace and the rest of the squad swarmed in. From senior members who’d trained her and Matt back in the day, to newbies who didn’t even know Matt but were infected by the mood, everyone needed a hug.

Well, Raya Victoria Piacenza wasn’t getting infected by nothin’ and nobody, even if his mother’s tearful words threatened to cause a lump in Raya’s throat. She held back from the knot of cheering fools—that was now blocking the exit, causing people to swerve around it, shaking their heads and grinning at the noise—and tried to lower her heart rate. But all she could see were Matt’s bare arms around his mother, his bicep flexed, his medic tattoo clearly visible on his brown forearm. Oh, God.

Finally, the knot began to unravel. Someone reached behind Matt to take his pack, joking about how heavy it was. Someone else mussed up his hair, teasing him about the short sides. His mother, Mariah, linked arms with him, chatting away about the party that was being thrown for him in town right now. Matt grinned down at her, used the hand she wasn’t occupying to smooth down his hair, and turned to the exit.

And somehow Raya knew that he’d known she was there all along. His smile changed, cooling, becoming more polite, though no less devastating. “Hey, Raya.”

A sheepish, apologetic smile would have been more satisfying, but at least he didn’t grin at her like a maniac. “Matthias,” she said, giving him a little of the ice in her heart.

She was aware the rest of the group was watching them like a ping-pong game, even the ones who didn’t know Matt. Damn gossipers. Her and Matt’s story had ended years ago. His fault, not hers. “Fine,” she ground out. “Shall we go?”

“Hell, yeah!” Dennis shouted and grabbed Matt’s arm, turning him and breaking their eye contact. Matt allowed it and pretty soon, she and a couple of others—not Matt—were in her trusty old Ford, following another truck to the firehouse. The long-lost prince would be arriving at his party in style.

Raya stayed quiet, her jaw rigid, while the others chatted about how many they expected at the party and how much it would make. The new owner of the bar restaurant in town where they held their weekly “meetings” had been great at sprucing up the place. She wanted a big crowd as bad as the squad did. But Raya wished there had been some other way to kill all these birds with one stone. Which genius had had the idea for the party in the first place?

Once they got into Tanner, the fire department met them with their vintage red truck and Matt was transferred to it. The beeping, honking mini parade stopped traffic for three blocks and before long, Matt was deposited at his party and Raya was able to blend into the crowd. She was on call that day, so she wasn’t able to drink her sorrows away, but hiding in a group of actual friends, getting the gossip of anyone but her, was just what the EMT ordered.

The bar owner, Laurel, had produced a ton of finger foods for them to try, to highlight where she wanted the restaurant’s new menu to go. Raya tried a few and they were delicious, but her constantly blipping radar, updating her every few seconds on where Matt was, took away her appetite. She heard some of her friends complain about the samples, waxing lyrical about the hockey-puck burgers and over-fried chicken pieces Laurel’s father had served. Well, these looked and tasted a lot better than that. Laurel had had some false starts with the new menu, but if she kept going in this direction, the first aid squad wouldn’t be finding another meeting place any time soon.

Sullivan’s had opened up a garden space in the back that Raya hadn’t even known was there, and she eventually found her way outside, sipping her cranberry and seltzer and standing closer to one of the heating towers in the garden to stave off the chill of early November. She lifted her face to catch more of its heat.

“Hello,” a too-familiar voice said from behind her.

How had he snuck up on her like that? She turned around. Matt was standing a respectable distance from her, and yet she still felt heat coming off him as surely as from the heater behind her. He was wearing a jacket now, a leather motorcycle jacket, the bastard, that made him half-hero, half-bad boy, and wholly delicious.

She met his eyes, darkened in the deepening evening. She and Matt were about the same height, a fact she’d always used over him when they were in high school, when their shoulders would jostle together as he tried to put his arm around her in the hallways and she would playfully push him away. Simpler times…

“Are you enjoying your party?” she said. Good; her voice wasn’t giving an inch.

“Laurel’s being nice. The others talked about it with her long before I got involved. I just got the word out online and fixed the schedule for tonight, that kind of thing.” She’d been there the night it had come up, and everyone had looked for her approval, but she didn’t want Matt to know any of this.

“We could raise a lot of money tonight.” She narrowed her eyes at him. “That’s why I did it.”

“I get it,” he said, uncharacteristically serious. “Listen, Raya, could we go somewhere quieter and talk for a couple of minutes? I want to—”

“There he is! Raya, quit giving him the death stare—it’s his party!”

The cry came from the entrance to the garden and made everyone turn around. The firefighters, who’d also been invited because they’d overheard the planning and would have killed Laurel if she hadn’t included them, muscled their way into the crowd and over to Matt. As Raya had known he would, he plastered the grin on his face as he turned to them. “I’m right here.”

“No fair, Raya, hogging him like that!” Sheri, one of the EMTs, wagged a finger at her.

“I’m not hogging a thing,” Raya protested. “You can have him.”

And she dodged them all and melted into a corner, where only the fairy lights lit her from behind and she could work on forgetting the smell of leather and sandalwood that Matt had always brought with him.

Free Me is available in the following formats: 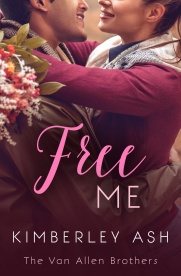 Did you know that Free Me and many titles are available digitally from Tule's own bookstore? Check it out!