He’s the original junkyard dog and she’s got him by the scruff.

Joshua Tree National Park Ranger Charlotte arrives on the scene of a car accident caused by a large dog tearing across the road. The third sighting of the animal in as many weeks, Charlotte’s interest is piqued. Armed with a bowl of dog food and a bucket of patience, she sets out to find the beast.

With the grille marks of a sedan imprinted on his broken ribs, Alex returns to the scene of the accident, scouring for prints he’d left behind when he encounters Charlotte on the trail. The attraction is undeniable, but Alex is on a mission from Hades and can’t afford the distraction.

While Charlotte continues to gain the trust of the wild dog roaming the park, Alex is caught between the woman he’s falling for and the job he was sent to do. With bodies and secrets piling at his feet, Alex is pushed to choose between the hellhound he is and the man he wants to be.

Alex Echidna glanced down at his speedometer as he hit the highway, his foot heavy on the gas pedal. “I’ve picked up stale scents at every tourist trap in the region, so the guy’s definitely not a local.”

“Perhaps narrowing your search to the temporary accommodations in the area would be a better use of time,” Ryan suggested, his voice crackling through the phone’s speaker as Alex drew closer to the north entrance of Joshua Tree National Park. “The territory is too large to effectively patrol alone.”

Rolling his eyes at his older brother’s recommendation, he slowed his approach to the park and scanned the darkness for signs of life. “If that’s your subtle way of saying Bo should join me out here, no. I have enough on my plate without adding his drunken ass into the mix.”

Ryan’s resigned sigh told Alex all he needed to know about his twin’s current condition. The eldest of the trio by a decade, Ryan usually took the reins whenever Bo’s impulsiveness took a dangerous turn, Ryan’s levelheadedness a good counterbalance to the wilder twin’s inclinations. “Call me if you manage to find the guy.”

The phone went black and he pulled over onto a gravel road, killing the engine before tucking his cell and wallet into the glove box and getting out, stretching his arms over his head and rolling out his neck.

The hunt for the cursed Pirithous bloodline was taking its toll on all of them, centuries of tracking down the descendants of Hades’s enemy culminating in what they hoped would be the final quest, the last task for Cerberus before they could return to the underworld and resume their place at the heels of their master and mistress.

At least, that was what drove Ryan, the oldest of the brothers and the one most bonded to their master.

Alex tugged his black shirt over his head and tossed it onto the front seat of his SUV, shaking his blond hair out of his eyes as he undid the fly of his shredded jeans.

Alex was decidedly less determined to return to the banks of the Styx to continue his centuries of subservience at the whim of a god and his overly indulged wife. He tracked the Pirithous because it was his job, a curse spat in a moment of anger by a vengeful god with impulse control issues.

Yeah, he was bitter.

Glancing around once more before kicking his boxers off, he nudged the door shut and dropped to his knees, the transformation of his body into that of a hellhound complete within seconds.

The wind whipped up, sending a flurry of sand and odors across his muzzle, his ears zeroing in on the gentle movements of a rabbit nearby. Filtering through the stench of gasoline and rotting animal carcasses, he lowered his nose to the ground and set off across the park, dodging the chollas with their prickly spines that were a bitch to remove.

Tracking his late-night snack, he darted along the sand, wholly engulfed in the hunt for the elusive rabbit that had gone still among the brush. The scent grew stronger while he crept eastward, the heart rate of the animal thumping in his ears as it grew brave enough to dart out of the safety of its hiding place, kicking up dust when it tore across the paved road to the rockier terrain on the other side.

The predator in him went into full gear and he took off after the rabbit, completely oblivious to everything but his meal until the glare of headlights blinded him, the screech of brakes ringing in his ears as the car barreled into him and knocked him off his feet.

Ignoring the burst of pain in his ribs, he scrambled up, rabbit long forgotten when the driver flung his door open and the stench of the bloodline assaulted his senses.

Staggering across the terrain, Alex doubled back to the north entrance to call it in.

Charlotte rose to her feet, brushing the fine sand from her pants. “And which way did you say this dog was heading?”

The shaken man leaned against his shredded tire and looked to the north. “That way,” he muttered, flexing his bruised hands. “I’ve never seen a dog that big. Or that fast.”

The crunch of stones alerted her to her coworker’s approach, the lights of the truck coming into view around the bend. “I’ll be right back with some water,” she assured the injured tourist, bending to pat his knee. “And we’ll get a tow truck out here as quick as we can.”

She jogged over to the white truck and yanked the passenger door open. Max, her partner on the graveyard shifts, leaned his head back against his seat. “High or drunk?” He sighed, his mirrored sunglasses hiding his dark eyes.

“Neither,” she hissed, climbing across the passenger seat to reach the water bottles in the back. “Another black dog sighting. Same as the last two.” She pulled a bottle from the floor triumphantly. “Straighten your hat and come sit with the poor guy while I check for prints. And take off those stupid sunglasses. It’s pitch black outside.”

Although he muttered incoherently for a moment, Max slammed the truck door and made his way to her side, his brimmed ranger hat neatly leveled. “So a big black dog, eh? You sure it wasn’t a cougar or a bear? We get the odd one around here.”

The man’s head shook slowly, his eyes fixed on the ground. “Definitely a dog.” He swiveled his head toward the beam of her flashlight. “You’re not going out there, are you?”

“Chuck’s just checking for prints,” Max answered, kicking gently at the crumpled front end of the man’s car. “You really did a number on this.”

“Yeah,” the man murmured, taking a long sip of water. “I clipped the dog before I bottomed out on the ridge.”

She turned her flashlight toward the front of the vehicle. “A hit?” she called out as she closed in on her target. “Max, I’m going to take a few pictures while you call in a tow truck.”

“Yes, ma’am,” Max replied, tapping the tip of his hat before he returned to his truck to call in the accident.

Focusing on the misshapen indent, she balanced her flashlight between her knees and began snapping pictures of the small tufts of black fur embedded in the cracks of the plastic grill. She reached out, pulling a few of the long hairs out and running them lightly between her fingers.

“Definitely not a bear,” she muttered, bringing the beam of the light closer to the vehicle to assess for blood. “How far back down the path were you when you hit it?”

“Right there,” the tourist replied, pointing a few feet away. “It didn’t even hesitate, just got up and kept running.” He looked back out into the darkness. “Hope it’s not too badly hurt.”

She glanced over the terrain and smiled at the man. “You probably just spooked it. How about we get you into Max’s truck to relax until the tow arrives?”

Max passed a sandwich over to Charlotte, the corners squished flat in his large hands. “Why do you always put them in my truck? Why can’t they wait it out in yours?”

“Because you need to work on your people skills, and a captive audience is better than nothing.” She grinned, biting into the offering and grimacing. “Ew. Mustard.”

“Gimme that,” he grumbled, snatching the sandwich from her hands and passing over another. “Ham and cheese, no mayo, no mustard, no butter, no taste. Just like you prefer, your highness.”

Reclining her seat a fraction, she peered into the blackened landscape of Joshua Tree. “You’d think if someone’s dog got loose, they’d have notified the station or something,” she mused. “Or someone would have seen it during daylight. If it’s covering this much ground, how has no one gotten a good look at it?”

“Because it’s a cougar,” he replied, his mouth full. “Like you.”

“I’m not a cougar,” she protested, whacking his arm with her hat. “I’m barely thirty. And it’s not a cougar. The fur on that grille was consistent with dog fur. Same coarseness.”

She crumpled the sandwich wrapping in her hand. “I’m coming back tomorrow to check out the area in daylight.”

Easing his sunglasses back on, he grinned over at her and started the truck. “Okay there, super ranger. I’m spending my first day off in bed, out of the sand, and out of the heat. But you do you and give me the CliffsNotes version on Wednesday.”

“I don’t even know why you wear those at night,” she grumbled, straightening her bun and setting her hat to rights. “You look silly.”

Junkyard Dog is available in the following formats: 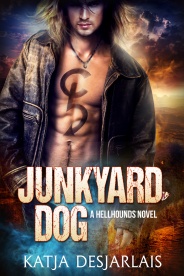 Did you know that Junkyard Dog and many titles are available digitally from Tule's own bookstore? Check it out!