The Witches of Time, Book 1

The Witches of Time, Book 1

Arianna O’Sullivan stared at the bleak, grey sky as she struggled against the confines of the Puritans’ unforgiving pillory. The bitter wind and rain worsened an already wretched day. Her drenched garments clung to her shivering body; water irritatingly streamed down her face from her long strands of scarlet hair, with no means to wipe them away.

Her shoulders ached and her wrists were raw where the swollen wood bit into her flesh. Being restrained always unnerved her. She’d come to despise this village and its suspicious people, but she knew what might occur if she allowed her anger to surface.

At least the rain dispersed the crowd; even the most curious onlookers sought shelter. However, Reverend Thomas Smythe, the man who’d issued her time in the pillory, watched warm and dry inside the nearby inn. She noticed the curtains move at the window. She was aware he enjoyed her misery. Closing her eyes, she whispered to herself, hoping to evade the cold, the pain and the fury brewing within her.

Darius Wyndham fastened his overcoat and held tight to his felt hat. The previously sunny, pleasant day peculiarly changed. The coastal wind turned frigid and wholly unexpected rain fell. The weathered signpost for Wyndham Village loomed ahead. Despite the unfavorable weather, he wasn’t stopping, not after his previous dealings with the Puritans there.

It disturbed him the disagreeable practices he’d witnessed in England were occurring in the colonies, too. There’d been persecutions in Europe for centuries and occasionally it happened here. But now there was an alarming level of hysteria. Nearly every colonial jail was filled with women, some men, and even young children suspected of witchcraft. It began last winter in Salem but the madness soon took hold throughout the colony. Darius was shaken from his dismal thoughts when his horse came to an abrupt halt.

“What is it, King? Are you tired, boy, or simply unhappy with this turn in the weather?”

Weary himself, Darius nudged his steed on, but was startled when he heard a female voice. He looked around, but seeing no one, presumed it was only the wind. He’d hoped to make it to Patrick and Bessie’s farm. The thought of a hot meal, warm bed and an evening with friends lightened his heart.

He’d been unsettled lately and found himself questioning his return to Massachusetts Bay Colony. Away on a merchant ship, he’d felt beckoned home, but he’d been back a year and hadn’t found a relevant reason. In truth, he hadn’t felt impassioned about anything in a long while.

In Wickshire getting horseshoes last night, he’d even considered visiting a brothel. Maybe seeing his base needs met might partly appease his growing discontent. Instead, he spent the entire night drinking with sailors, then walked the shoreline and watched the sunrise.

Darius was roughly jolted when his usually calm horse reared wildly. He braced his knees and held tight to the reins as he heard the disconcerting voice again, but still saw no one. The drizzle worsened; the bitter wind howled. Now chilled, Darius pulled up his collar. Could fatigue make him imagine the voice? But King heard it, too. Now the stubborn animal refused to move forward, instead turned toward Wyndham Village.

“Clearly, you don’t know how difficult Puritans can be! The farm has a lovely barn for you.”

Darius was determined to push on when a gust of wind whipped off his hat. He cussed, dismounted, and then raced after it. As he bent to retrieve it, the skin on his neck prickled, for he heard the mysterious voice again, now clearer.

“You must take this fated path, Guardian. From this day forward it’ll never be you alone to consider. Yer souls are paired for eternity!”

The eerie prophetess spoke with a thick Irish accent. Darius’s mother had been Irish; this might have been comforting if the message hadn’t been so profound.

“Who are you? Why don’t you show yourself?”

The summoning words spoken, a female specter with fiery auburn hair appeared. Darius’s heart thudded as the rain pelleted down.

“I’m someone you’ll never know…here to ensure you follow your destiny. My dearest treasure will become yours. I entrust her to you. As her sovereign guardian you must protect her when you can, comfort her when you cannot, but love her always. Mark my words, you’ll not regret it, Darius Wyndham!”

“How do you know who I am?” he asked, but the entity vanished as quickly as she’d appeared. Darius shook his head expecting to awake from a bizarre dream.

“For the love of God, King,” he said climbing upon the horse again. “Am I losin’ my mind? Alas, the day grows late and the weather fiercer. It appears we’ve little choice but to spend the bloody night in Wyndham Village. Nothin’ but bad luck could be responsible for that. Destiny my eye!”

Arianna stirred as men approached. One was the objectionable Reverend Smythe. She didn’t recognize the other, but felt inexplicably drawn to the man’s voice. The tone was authoritative, but strangely comforting and he didn’t speak like a Puritan. It was evident the men weren’t friends, but Arianna was surprised to discover she was the source of their disagreement. She opened her eyes just a sliver.

“The matter is of no concern to thee, Mr. Wyndham!”

“I disagree, Reverend Smythe. The first sight I met upon entering the village was this young woman in your barbaric pillory, clearly left here amid a miserable rainfall that now turns to snow. That’s a cruel punishment!”

Arianna commended him for standing up to Reverend Smythe; for few openly opposed him.

“Perhaps thou hast not heard of all the recent happenings?”

“If you’re asking if I’m aware of people being held in jails accused of witchcraft by their friends and neighbors for absurd, unwarranted reasons, aye, I’ve heard. I’ve also learned someone’s been hanged in Salem. This widespread lunacy surely won’t end well for many.”

“Why art thou here, Mr. Wyndham? I heard thee journeyed to England after thy wife…”

He didn’t allow Smythe to finish.

“I’ve returned to my land, but I’m not here to discuss me. I demand you release this woman!”

“Thou know’st nothing of this evildoer.”

“Aye, well unless you’ve proof she’s killed someone or is likely to, her actions couldn’t warrant this punishment. It’s bloody cold. Her garments are soaked; she’s sure to catch her death or die from the chill. My God, man, have you no decency?”

Smythe huffed indignantly. “Thou darest speak such blasphemy! I could see thee flogged!”

“Your threats don’t intimidate me. I’ll not back down like your terrified villagers, Smythe. Do you actually believe God condones your ill treatment of this woman or the others? If I didn’t think she’d be hurt, I’d smash your confounded pillory. Release her or I’ll dismantle it,” he said examining the structure.

“Mr. Wyndham, thou hast no authority here. Much has changed since thy father lived here.”

“That’s certainly true. My father wouldn’t abide jailing people…putting them through ludicrous methods to determine if they’re witches. What did this woman do to deserve such heartless treatment?”

“The devil’s within her. She’s beguiled most every man who’s drawn near her. She controls animals and the weather.”

Mr. Wyndham shook his head. “Have you actual proof of anything and truly no notion how preposterous that sounds?”

“The witch is clever. No one dares speak against her; women fear her and men are bewitched by her.”

“Why’s she in the pillory?”

“She’s been flogged as well?” That evidently infuriated Mr. Wyndham, for his voice rose. “You claim she controls the weather. If that were so, wouldn’t she’d stop this bitter wind and sleet as she stands in drenched garments?”

“Thou art already bewitched. Didst thou look into her evil eyes?”

“Her eyes are closed, you daft fool; she’s likely near death. I’ve heard quite enough! Hand over the keys; I’ll not stand by while she expires.”

Reverend Smythe must have feared the large, powerful-looking, determined man. He passed him the keys and stepped away. The man unlocked the padlock and lifted the wooden bar, holding her neck and wrists. Cold, hungry and weak, without the post to steady her, Arianna collapsed. Smythe gasped when Mr. Wyndham caught her and lifted her into his arms.

“Don’t touch her. Never gaze into her eyes, for thou shalt fall under her spell!”

He ignored the reverend and walked toward the nearby inn, calling over his shoulder.

“What’s the woman’s name? Where’s her husband or family?”

“I have paid no attention to the witch’s given name. She has no husband or family bar the devil…” Reverend Smythe continued spewing absurdities. Arianna shivered uncontrollably as the man opened the door to the inn.

The innkeeper and his wife backed against the wall.

“She can’t be here,” the innkeeper said.

“I need a room for the night,” Darius said, ignoring the man. “I have ample coin and will aptly reward you. We’ll require food and lodging.”

Next he addressed the innkeeper’s wife.

“Good mother, might I ask you to see this lass dryly attired, perhaps given warm broth and put to bed?”

The woman shook her head and the innkeeper spoke.

“What if she’s a witch? If we assist her we’ll be judged with her.”

“What, good sir, if she’s innocent? If you send her away, perhaps contribute to her death, could you live with that?”

With another glance at the young woman, the innkeeper and his wife nodded.

“Use the back stairs, but be quick. If word spreads we’re harboring a witch, we’ll be ruined or persecuted ourselves!”

“Thank you both. I’ll make certain Reverend Smythe knows I gave you no choice.”

As he carried her up the stairs, she awakened and Darius gazed into the eyes he’d been warned not to view…the most unusual, breathtakingly beautiful green eyes he’d ever beheld. If eyes were the mirror to the soul, he must be looking upon an angel. She seemed to radiate goodness and he felt an overpowering need to protect her.

The Witch’s Awakening is available in the following formats: 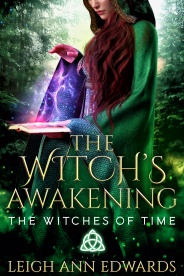 Did you know that The Witch’s Awakening and many titles are available digitally from Tule's own bookstore? Check it out!