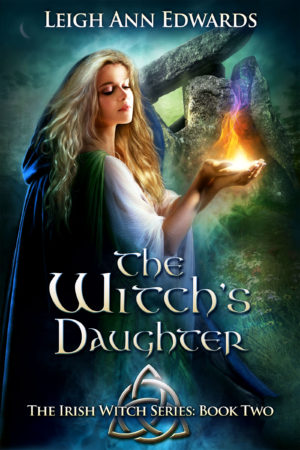 Healer, witch, and commoner Alainn McCreary battles valiantly to control her growing magical powers and to ignore her doomed yearning for noble Killian O’Brien, a man who is far above her station and betrothed to a noble, dark-eyed Scottish beauty. Alone, she continues her quest to break the bitter curse that dooms not only the powerful O’Brien Clan but also Alainn and Killian’s future happiness.

Threatened by dark forces, a powerful chieftain, and a suspicious priest, loyal, valiant and handsomely virile Killian vows to fight at his beloved Alainn’s side even as he realizes time is running out for both of them. The Witch’s Daughter, set in the mystical landscape of ancient Ireland, weaves romance, adventure and the supernatural into a sensual tale of love and longing that darkly whispers “What wouldn’t you do for love?”

In a state nearing exhaustion, Alainn dodged the horse and cart trundling into her path and hurried along the crowded street. Her feet throbbed painfully in her thin slippers, already bruised from the uneven cobblestones. Weaving in and out of the scattered vendor stalls, pushing through the crowds, she paused but a moment to catch her breath and inhaled deeply. The fetid scents of the city swamped her senses, and she felt her stomach lurch queasily. She set off once more on aching feet.

Hoping to find somewhere to hide for a time, Alainn rounded the corner of a narrow alleyway only to pull up short. Pierce stood before her, exasperation clear on his young face. She met his stare with disdain.

“Pierce MacArthur, my patience wears thin!” she rasped angrily. “I’ve told you no less than a dozen times. I’ve absolutely no intention of returning to Castle O’Brien!”

“Aye, ’tis true, you’ve told me,” he protested with ever-thinning lips, “but I cannot in good conscience leave you here alone in this city. I have promised Killian I will watch over you in his stead, and I intend to keep my word on that count. I am here to protect you!”

“I do not desire your presence nor require your protection, so be gone with you. Sure, Cookson must be nearly ready to set off for the castle. Join him now and be off!”

Pierce narrowed his eyes, crossed his arms, and set his jaw in defiance. In a flash, she turned and sprang away from him, but his strong hand reached out and clamped on her arm. He began dragging her toward the din of the market and, though she struggled, she was no match for his strength.

“Sorry I am, Pierce, but ’tis you who have forced my hand.” He looked back sharply, eyebrows knitting in question. “Truly,” she spat out, trying to wrench free her arm, “you would have been wise to respect my decision and heed my words!”

Pierce glanced up as a tall stack of crates came loose from their ropes and flew at him erratically. He jumped back in alarm, though each crate seemed to pass narrowly by without hitting him. They crashed at his feet, smashing open, spewing their contents before him and capably blocking his path. Alainn ran. She thought she felt his accusing glare on her back long after he was lost from sight.

After a fair distance, Alainn darted through the back doorway of a building. She found herself in a crowded ale-house surrounded by a rowdy crowd of bleary-eyed men. They had obviously been partaking of the wares for a goodly while. Hoping not to have been noticed, she turned back to the door when a patron lurched in front of her, blocking her exit. He eyed her up and down.

“You can’t simply turn up here givin’ us a wee glimpse of yer beauty and then expect to leave without even an introduction,” he slurred, his breath sour. Alainn crossed her arms with impatience as he continued to speak. “But you don’t seem so very friendly. Why’d you even bother comin’ in here then?”

Trying to ignore the foul odor permeating the air around him, Alainn looked up at the huge man who dwarfed her. Never gifted in deception, she struggled to come up with a response until he leaned in, his lips pursing.

She backed up and stammered, “I-I beg your pardon, sir, I seem to have made a grave error. I’d thought this was the alchemist’s shop. I’m in need… I’m in need of an elixir, yes…an elixir to aid my family for I fear they may, they may…be stricken with the pox!”

He stopped advancing, his face uncertain, then his eyes grew wide with obvious fear.

“The pox,” he hissed. He slowly backed away as did the men nearby. “Two doors down,” he managed, covering his nose and mouth with his hands. Alainn turned and made haste.

Relieved, she fled back down the alleyway, nearly smacking into two sailors on the verge of a confrontation involving knives.

“Give it back!” the taller man demanded, a knife fisted in his hand.

“I don’t have yer damn coin! I’ve told you before and I will tell ye again! I did not take it!”

“I saw ye eyeing it last night after we were handed our pay!”

The men started to circle each other, knives gripped and ready for slashing, knees bent, ready to spring. Alainn moved into the shadows, hoping to remain invisible as she inched her way along the stone building. When the first blade swept through the air she was certain they would be too intent on their quarrel to pay attention to her. However, when she narrowly missed stepping upon a huge rat as it scurried before her, she could not stop the startled shriek that escaped her lips.

Momentarily distracted, they looked at Alainn. She could see thoughts of lascivious activities with a young maiden replacing their current feud. They lunged toward her.

“ ’Twas Conelly!” she blurted, dancing away from their hands.

“What?” they asked in unison, trying to grab for her.

“Fergal Conelly, he stole your coin.”

This brought them up short. They looked first at each other and then at the golden-haired girl who stood before them, the sheer picture of innocence.

“He has it in his boot,” she insisted, “but sure he’ll be spendin’ it this night if you don’t get to him straightaway!”

“How can she know?” one man hissed, the forgotten knife now slack in his hand.

“She’s got the gift,” whispered the other, crossing himself. The men stood unsure, assessing the situation and the possibility that this odd young woman might possess the gift of second sight. They stepped carefully away from her, and the one who had lost his coin turned and ran to find the accused Conelly. The other stared at her with some doubt, but soon followed his mate.

Alainn made her way back to the safety of the crowded street, shaking her head. The sights and sounds of the city surrounded her, and affronted her senses. She had read of cities before, had tried to imagine them. But, imagining and actually being there were vastly different things. She was beginning to regret her hasty decision to escape Castle O’Brien, even though it had seemed her only option.

Trying to form a plan, she walked on, deep in thought.

A man walked just behind her, so close she could feel his hot breath upon the nape of her neck. He snarled, his lips curling back to reveal a mouth nearly black with rotted teeth.

“I want your hair,” he repeated.

“Aye, ’tis a most unusual shade, a lovely golden color. The tresses would be much in demand.”

The man was by no means destitute. His garment suggested he was a merchant of sorts, though a dirty one. There was a large broadsword in his scabbard, and she reasoned, by the size of his upper arms, that he had the strength to wield it well.

“Ah,” he leaned in and sniffed her hair. “There are men and women alike who would be most pleased to have your locks made into a fine wig.”

The man unsheathed a small knife from his belt. It glinted in the sunlight.

“Shall I see you parted from your golden tresses?” he murmured almost lovingly.

Whether he intended to reward her in coin for her locks or simply meant to shear them and be done with it, she did not fancy either option, though losing hair would clearly be preferential to losing her life.

“I am rather fond of it, myself,” she protested trying to calmly release her hair from his possessive grip. He grinned once more, and Alainn caught the repugnant stench of his foul breath.

“I’ll be takin’ more than your hair should you cause me any hardship,” he drawled.

Her eyes skirted the area in an attempt to find help.

“You’d be wise to think twice about disturbing my hair or any part of me,” she cautioned.

“Do you have a man about somewhere nearby?” he sneered. “I wouldn’t have left someone so lovely alone in a city, myself. Something most unfortunate could happen to her.”

“Not a man. I have something far more powerful and effective than a mere man.” She added in a whisper, “I am protected by fairies.”

He smirked and guffawed.

“You should not take this lightly, good sir,” she chided, her face solemn. “Interfering with anyone under fairy protection is a most grievous matter.”

“Are you addle-minded, woman?” he muttered impatiently, but nonetheless looking nervously around.

“Do not rile them,” she warned. She, too, glanced around as though she saw fairies surrounding her. Smiling wickedly, she concentrated on the knife and willed it from his hand. It flew free, whizzing through the air, and lodged itself in a nearby signpost.

He reached for his sword, but it too was torn from his grasp. It clanged to the cobblestone street, echoing unnaturally. His face paled, and he bent to retrieve it. Alainn took advantage of the moment and jumped behind a nearby cart. Sword in hand, the man stood up uncertainly, obviously deeply confused. He scanned the area, trying to locate the woman who had only now stood before him. When he turned his back, Alainn set off in the opposite direction, her feet fairly flying on the cobblestones.

Certain she had surely given the man the slip, she dared cast a glance back. Her heart lurched in fear to see he still followed. She set out running at full speed, blocking his path with whatever objects she passed, Killian’s voice fresh in her mind. “You may not look for trouble, Alainn, but it seems to find you nonetheless.”

The loud footsteps seemed too close. The man was gaining ground. Her burning lungs felt as though they would surely burst. Her stomach reminded her it was still queasy. She searched for a doorway through which to escape but could see no place to hide. Cursing under her breath, she wondered how she always managed to find herself in such dire circumstances.

As she rounded a corner, she heard the clomping of a horse nearby. Carefully envisioning the face of the man, she called upon her magic. It happened all at once. She heard the horse neigh and rear, the man cry as he leapt out of the way, and his curses as he slipped on a fresh pile of horse dung and fell face first into another.

“Protected by fairies,” she softly whispered and sent the message off on the wind.

The Witch’s Daughter is available in the following formats: 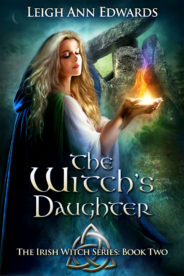 Did you know that The Witch’s Daughter and many titles are available digitally from Tule's own bookstore? Check it out!