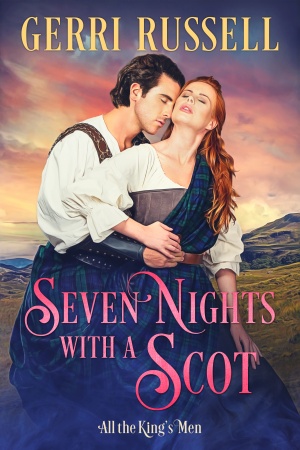 Seven Nights with a Scot

As witch hunt fervor sweeps across Scotland, it is even more challenging for Vivian Sinclair to hide her gifts of precognition and healing—and more dangerous. Her guardian, King James, betroths Vivian to one of his most loyal warriors thinking the powerful Douglas clan can keep her safe, but when Quinn Douglas arrives to take Vivian to his twin brother as a bride, he barely thwarts a mob calling to burn the witch. He rescues Vivian, and they begin the perilous journey to her new home.

When a powerful man wants Vivian dead, their escape across Scotland places Quinn and Vivian in daily peril and is besieged by the attraction sizzling between them. With each day and each mile, he finds himself falling more deeply in love with his twin’s betrothed. He cannot betray his brother, and he’s pledged to serve his king, but Quinn cannot imagine letting Vivian go.

Vivian Sinclair looked up from her worktable. The footman she knew as Andrew watched her from the doorway of her work chamber belowstairs near the kitchen. He never came inside the room. It was as though he feared, like so many of the other servants in the castle, he might somehow be affected by whatever herbal remedy she created. Potions, they called them with shuttered eyes.

“I haven’t finished my tisane for His Grace yet.” Vivian didn’t bother to hide her confusion as she continued to grind the willow bark into a powder with her mortar and pestle. “Only a few minutes more.”

“The king said the matter was urgent and I was tae bring you straight tae him,” Andrew said, easing away from the doorway as she set her pestle down. He watched with a patient face as she wiped her hands on her apron.

Vivian tried to hide the shaking of her hands as she removed her apron. She took a moment to smooth away from her cheeks the fiery-red locks that escaped her ribbon. She knew all too well the look of displeasure that would come to King James VI’s face the moment he saw her.

She did not resemble the noblewoman she was or even a lady of fashion. Her wild hair could never be tamed into the ringlets that were so popular among the other courtiers and she hated wearing it up; her gown was simple, unadorned and several years out of date. Vivian didn’t wear the fine dresses the king, her guardian, had had made for her, preferring to wear things she didn’t fear soiling when she tended her patients instead. “Do you have any idea what this is about?” she asked as she followed Andrew up the main staircase.

Andrew wouldn’t meet her gaze. “He dinna say. But his mood is rather foul.”

“Thank you for the warning,” Vivian said as she stifled a spurt of dread. Why did the king want to see her now? She had attended him earlier this morning and had been crafting a tisane to help ease the pain in his joints. The pains came over him ever since his return from Denmark with his wife, Anne. Or could he have finally heard the whispers that had started last week after she had cured Lady MacPhearson’s fever? The older woman had been pleased but her husband had called Vivian’s abilities nothing less than witchcraft. No matter the reason, the king wanting to see her for a second time in one day did not bode well for her.

Vivian and Andrew walked in silence until they came to the doorway of the great hall. Andrew bowed to her there and remained at the door while she entered. The opulent chamber was one of the king’s favorites with its magnificent wooden ceiling, paneled wainscoting, and red walls. Standing tall, she continued toward the massive fireplace where the king sat alone. He looked up when she stopped before him. “Vivian.”

“Your Grace.” She bowed and placed a grateful kiss upon the hand he extended to her, as was proper. “You wished to see me again, my lord?”

As she suspected, an irritated scowl came to his face as he took in her tidy but rather plain form of dress. “I can no longer put off my duty as your guardian. We need to discuss your impending marriage.”

“My what?” Vivian gasped. She reached with an unsteady hand for the chair beside the king, wilting into it. Even though marriage was expected of young women, such a state was the last thing she wanted.

“I believe you heard me.” Leaning back in his chair, King James appraised her. “I’ve betrothed you to a very dear friend of mine, Laird Dugald Campbell. He is a seasoned lord, and he will be good to you, my child.”

Vivian clutched the arms of the chair. Her mother and father’s marriage had been no love match, arranged by James’s father as a means to join two estates in a consolidation of power between two clans. Her parents had tried to make their marriage work, but they were too dissimilar. Her father had been strong and domineering, great strengths on the battlefield but those same traits followed him home during times of peace. As the years went by, her mother became fearful and dispirited, slowly becoming a shell of the woman she’d once been—a woman with no heart, no happiness, and no will to live. Vivian had always feared something similar might happen to her.

And yet her fears were of little concern to the king. He wanted her married. She had little choice in the matter. “What do you mean by ‘seasoned’?” she asked, unable to hide the slight tremor in her voice.

Hearing her fear, the king sighed. “A mature man has a lot to offer you, Vivian. He is settled in his ways. He already has an heir. He will welcome your skills as a healer. And, while this is no love match, I know, he and his clan will protect you from . . .”

The king did not finish his sentence but she already knew what he meant to say. The witch hunting that had been rampant in Denmark had followed him back to Scotland through his own fears of the unknown.

“Darkness is coming, and I fear I may not be able to protect you here at court any longer. You are too different, too vulnerable, and I will not sacrifice you because of something I can no longer ignore.”

Vivian shook her head, trying to clear her chaotic thoughts. “You do not have to believe what others believe. Witchcraft is not real. You are an intelligent man. Look at the facts. Look at things logically. I do not understand—”

“You do not have to understand,” the king said brusquely. His face reddened.

Not many at court would have talked to him in such a fashion, but she had to make him see some sense. “Witches are not real.”

His eyes flared. “I am your king and I know what is real and what is not.” A moment later he settled back in his chair with a sigh. “Why must you always challenge me? You are very like your dear father, you are.”

“I mean you no disrespect, my lord. I care about you as I would have my own father.”

“And I care about you, Vivian. Trust that I am doing the right thing for you. To protect you just as your father once protected me. I owe him that much.”

She’d heard the tale many times of how her father had placed himself in harm’s way in order to save the king’s life. It was ultimately how she’d ended up as a ward of the king after her mother’s death. The king had been nothing but kind to her over the past six years. Even so, she knew the king’s kindness would not last forever, especially now that he had taken a wife himself. Vivian had been of an age to marry for years. It was a miracle he hadn’t tried to marry her off before now.

“You leave tomorrow for Kilkerran. Pack only the supplies you cannot replace. And never speak about your visions to anyone ever again. Do you understand?”

She drew a breath, trying to slow her wildly beating heart. “My visions have been helpful to you. I helped you avoid an assassination attempt. I predicted your marriage to Anne of Denmark. I revealed you would see eight children born into this world, and that you would not only become king of Scotland, but England as well.”

Vivian stood, no longer able to contain her agitation. “I predicted your mother’s death. And foretold of your success as a scholar, and that it would be you who made the words of the Bible accessible to not only the nobility, but the common man as well.”

“It is hard to know what is true when so many things have yet to transpire.” The king frowned. “Have you seen any future attempts on my life?”

“If I do have such visions, I promise to warn you, Your Grace.”

After a moment he went on. “You did predict my marriage to Anne, but you failed to tell me about the attempt on her life by the others of your kind.”

Her kind? The words stalled her pacing. King James had never addressed her as such before. He’d always referred to her as his secret informant and healer in the past. Never as a witch. He had heard the whispers Laird MacPhearson had started.

“You will punish me for a crime that happened so far away and months ago?” Vivian had heard the stories from other courtiers who claimed witches had tried to harm the queen as she sailed from Denmark to Scotland to meet her new husband. King James had gone to the queen’s rescue and the couple had arrived back in Scotland safely.

“I am not the instigator of this madness,” the king said, his tone defensive. “Even I cannot stop what is coming. There is unrest among my subjects. Plagues and crop failures are straining communities across Scotland. In response, people are looking for someone to blame. This time they are blaming witches. A tribunal has been established in North Berwick for several men and women accused of witchery. I must go and observe before things get too out of control, but not until I know you are safe and in the care of my old friend.”

“Surely you have younger friends,” she quipped, then held her tongue at the king’s sharp look.

“Only you get away with such talk, I assure you. Now stop arguing with me and do as I command. I trust Laird Campbell with your life. That should be enough.”

Vivian shivered, fighting the unease that had settled inside her. “By sending me away, you are in essence labeling me a witch. Is that what I am to you?”

“Shhh,” the king admonished, his gaze shifting around the still-empty chamber. “Mind your tongue. Others might not see things the way I do. While my word is absolute, do as I say or you may yet find yourself in danger.”

Was that a threat or a promise?

Regardless, her life was about to change dramatically. For the better or the worse remained unknown. This was one of those times when she wished she could see into her own future, but those glimpses were never forced.

Vivian straightened to give the king a single nod of acquiescence. As the king’s witch, she had no choice but to do as he bid.

Seven Nights with a Scot is available in the following formats: 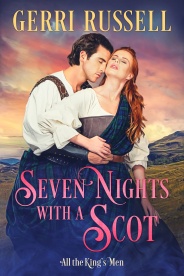 Did you know that Seven Nights with a Scot and many titles are available digitally from Tule's own bookstore? Check it out!