Fourteen years after her abrupt departure, Samara Davis is back in Marietta, Montana. Now a widow, all she wants is to give her anxious four-year old daughter, Jade, a happy, stable home. Unfortunately, the heritage house she purchased is nowhere near ready for occupancy. And the man responsible for the delay is none other than high-school golden boy and love of her life Logan Stafford, available, interested and just as swoon-worthy as ever.

But this single mother has one priority. She’s all Jade has, and she’ll do anything, make any sacrifice, for her child’s future. And getting distracted by a long-lost boyfriend is not on the agenda.

Logan Stafford never forgot the lonely girl from the wrong side of the tracks who broke his heart. Not only is she as irresistible as ever, but her delightfully odd little girl has him wrapped around her finger in no time. Believing they’ve been given a second chance, Logan’s determined to pull out all the stops on the house to prove to them both that he’s a guy they can count on.

But, despite how easy it is to love Logan, second chance is still a gamble Samara can’t afford to take.

Of course it had to be the underwear suitcase that slipped from her hands. The ancient hinges ruptured on impact with the sidewalk and it split open like a bale of fiberglass insulation. Except, instead of bright pink slabs, what burst forth was dull white, black and beige –

Jade planted her little feet on the cobbled drive leading to the Bramble House bed and breakfast, and glared at her mother accusingly. “Panties are private, Mama.”

Some teenage boys leaving the park across the street paused in their roughhousing. One of them handed his football to the others and began loping over to her.

If there was anywhere on the planet where you could still find old-fashioned courtesy, even when you didn’t exactly want it, it was Marietta, Montana.

Samara saw the instant he recognized the items flung about them.

He froze midway, seemingly paralyzed beneath the canopy of fall colors sheltering the street.

The boy rejoined his pals and they loped away, but not before she heard hoots of laughter.

Spare her from adolescent testosterone.

“I know, honey.” She squatted to shove the formerly neatly rolled items into the case, but it had been packed tightly and without hinges, the laws of physics just laughed at her.

She popped the back of the mini-van and pushed and shoved stuff until she located a bungee cord. She could use it to hold the case shut. Naturally, it was underneath the spare tire and one of the s-hooks had become deeply attached, and resentful about being moved.

“You wanna fight?” she muttered. To herself or the stupid clingy s-hook, she wasn’t sure. She yanked hard and, suitably chastised, the cord let go. Of course, being a bungee cord, it snapped back with great gusto and the metal hook, in an illustration of karma or retaliation or, more likely, that darn physics, grazed her chin.

She stumbled against the curb and landed on her butt in front of Jade, who was now clenching and unclenching her fists. Bob shoved her head under the girl’s arm but it didn’t have much effect.

I know exactly how you feel, thought Sam, too weary to stand up.

Through tear-blurred eyes, she saw a pretty young woman burst out the door, a plastic garbage bag in her hand.

“Samara Davis, right? I’m Eliza Bramble. Welcome! I saw you arrive,” she said somewhat breathlessly, hurrying toward them. “I was on my way down, but then I saw your suitcase break and I went to get a bag first.”

“Looks like your little one isn’t very happy at the moment.”

“It’s been a long day.” Samara got to her feet, one hand on her chin, the other reaching forward, hoping to distract Eliza with a handshake.

She squatted down in front of Sam’s quickly dissolving daughter, her voice friendly, her face open and helpful. “I’m Eliza. And you must be Jade.”

Instantly, the dog moved to stand between Jade and the new person. Eliza looked at Sam, eyebrows raised.

Sam shoved her underwear into the bag, heedless of order or anything other than getting them out of public view, making a mental note to get rid of every single piece, as soon as she had a chance to buy new ones.

A whole drawer-full of new undies.

Starting over from the bottom up. Literally.

Eliza moved to touch Jade’s hair. Sam knew it was a well-intended gesture but Jade shrank away. Before she could begin crying, Sam scooped her up, the bag dangling from her arm.

“Then let’s get you to your room.” The woman stepped back, her smile less sure now. “Don’t worry. I’ll get your luggage. You take care of your little one. There’s some supper in the warming oven, for whenever you’re ready. We’ll get better acquainted then.”

As Samara hurried up the weathered stone path to the front door of Bramble House, her chin throbbing, her arms shaking, her heart broke again for her little girl. It was too much. It was all too much.

Just a few more days, she reminded herself, as she’d been telling herself every day for the past few weeks. A few more days and they’d be in their very own home, finally.

Shelter. Privacy. A place where she and Jade could finally rest and recover. Where she could hear herself think and be alone long enough to grieve the life she’d lost and maybe figure out a way to stop dreading each new day and embrace their future.

She stepped over the threshold, surveying the vaulted ceiling, richly textured walls and elaborate chandeliers. But what must have been a beautiful home at one time now had an air of faded gentility, unspoken and unacknowledged decay.

She jumped and turned to see an elderly woman who could only be Mabel Bramble. Tall and unbent by age, she stood motionless at the railing, her thin veined hands resting as if posed for a portrait.

Samara flushed, acutely aware of her travel-wrinkled, sweaty attire. Not to mention the unhappy child in her arms and their dog of questionable parentage that was no doubt already shedding all over the well-polished marble.

“Never introduce yourself with an apology.” Mabel Bramble descended the grand staircase, no smile to soften her words.

Her real estate agent had given Sam an oblique warning about Mabel. Great-aunt to the Carrigan girls of Circle C Ranch, as well as one of the original founders of Marietta, Mabel had strong opinions on how her town had deteriorated, and who was to blame.

“My name is Samara Davis, actually. This is my daughter, Jade Davis-Kim.”

Mabel sniffed, as if rejecting a husband’s surname was a mark of ill repute never spoken of in polite society. But she stopped in front of Sam and extended her hand.

The older woman’s grip was surprisingly strong and instead of letting go, she held Sam’s hand, her eyebrows raised. Waiting.

“You may call me Mabel.” She nodded once, then released Sam’s hand. “And your child is called Jade, you say. Hello, Jade.”

Oh dear. If Aunt Mabel disapproved of Sam’s manners, things were about to take a sharp downward turn.

But Jade turned her dark gaze in the direction of this older woman who was keeping her distance and therefore safe to check out.

A bark of laughter shocked them all. Mabel lifted an elegant hand to her mouth.

“Gracious, child. You are an impertinent one. You may call me Aunt Mabel. Can you do that?”

Jade cocked her head in that particular way that told Samara she was uncomfortable but holding it together.

“Well done. Now, tell me, Jade, who is this creature with you?”

In their email communications, Sam had been careful to ensure that dogs were welcome at Bramble House. Eliza had been understandably cautious, but once Sam explained that the dog was very well-trained, and part of Jade’s coping mechanism after her father’s death, Bob had been approved.

“This is Bob,” said Jade, making the briefest eye contact with Aunt Mabel. “She is part Labrador Retriever, part Border Collie, part luck of the draw. Bob is my best friend. She is five. I am four.”

Samara felt a flush of pride. Jade had recited the explanation just as they’d practiced!

Aunt Mabel was unimpressed. “I’m not accustomed to bringing farm animals inside the house but I’ve agreed to allow it during your stay. I trust she will not be a nuisance.”

Thankfully, Eliza entered the room during Jade’s introduction and heard the veiled insult in her aunt’s response.

“Bob is simply lovely, isn’t she? And smart, too. Now, if you’ll excuse us, Aunt Mabel, I’ll show our guests to their rooms.”

Eliza herded them toward the hallway.

“Don’t mind my great-aunt. I think you’re going to love your stay with us. You’ve got a Jack-and-Jill bathroom connecting your bedrooms and there’s a sliding door to a patio off your room, Samara. Now, let’s get you settled, shall we?”

As she followed Eliza through the once-opulent hallway, Samara felt Aunt Mabel’s keen eyes boring into her back.

She feared they hadn’t made the best first impression on Aunt Mabel.

And that was before she remembered the display of underwear in the street.

Her Montana Hero is available in the following formats: 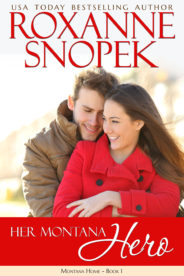 Did you know that Her Montana Hero and many titles are available digitally from Tule's own bookstore? Check it out!