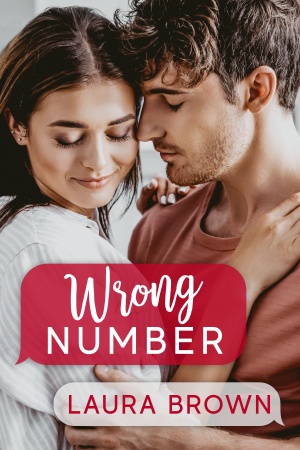 A stranger’s NSFW text wasn’t part of her plan…

Avery Bloom has her entire life mapped out…until a stranger mistakenly texts her a dick GIF that changes everything. When insomnia has her wide awake before starting a new job, his text is a welcome distraction. Soon Avery’s dirty texting a stranger, and reveling in the freedom of being someone other than her usually-reserved self—someone who doesn’t have a hearing loss and isn’t trying to fulfill a dream that isn’t hers.

Jake Ruben never intended for that particular image to end up in a stranger’s messages, but he’s not complaining. His textmate is sexy and fun and—unlike anyone in his real life—knows nothing of the burns that limit his mobility. The new pastry chef at his mother’s Jewish bakery does, and she’s as tempting as her cupcakes. Soon he’s texting less and seeing Avery more.

But when Jake learns Avery is his texting pal, the revelation shocks them both. Will they have a chance for love without a screen to hide behind?

It started with a dick pic. A cartoon GIF to be exact, which made things even more odd than if it had been real and walking around on its balls. As a general rule, obscene cartoons from random phone numbers weren’t the most welcome occurrence. And yet insomnia had me wide awake—and curious—because this unsolicited penis GIF made my sleepless night much more interesting.

I put down my phone and glanced around my sparse apartment living room, in need of a distraction. The beat-up wood floor had a polished shine to it, in contrast with the dirty and dinged boxes. They lined the far wall, balanced like the final Tetris round moments before the end. The opposite wall held the dismantled boxes, waiting for me to discover what, if any, recycling options this place had. But the thought of unpacking another one made me twitch. Insomnia would be so much better if it came with superhero cleaning skills. No, scratch that, superheroes made messes. Not once had I seen the Caped Crusaders replace broken glass and rebuild flattened skyscrapers.

I’d have to come up with another superpower to equate to my insomnia. A year of sleepless nights, and all I had to show for it were a few new recipes and a mourner’s heart.

I tapped my phone, my screen coming to life with the image of a fancy chocolate, caramel cupcake and the time: two a.m. I’d been at this for hours, anxiety having a few choice words about my move. I should be tired. I should tackle the next box. Or get my butt to bed.

My bottom lip found its way between my teeth, and it had nothing to do with the cupcake. It had to do with certain other things on my phone, inappropriate ones that looked a hell of a lot better than unpacking. You’re tired, whispered the angel on my shoulder. The most fun you’ve had in a year has been food related, screamed the devil.

Before the angel had a chance to protest, my thumbs had not only located the text but also started a response.

Me: Do you normally send dick GIFs to strangers?

Through my blinds, the streetlight created shadows on the neighboring building. No more trees and clear skies, not since I moved to Massachusetts from Upstate New York for a new job. The move was purely career-related, even if the last fun thing I’d done involved a Bar Mitzvah and a guy who was more of a dick than the anonymous texter. Career or not, perhaps a little fun would be a good thing. Only my phone stayed quiet. Damn, I scared him off. Wouldn’t be the first time.

The Tetris wall called my name. I could probably get the box closest to the window without causing a topple effect my downstairs neighbors would surely hate me for. As I set the phone on a box designated for the kitchen, it vibrated out of my hand, shifting on the cardboard, causing me to jump and clutch my racing heart.

I opened the text before I took my next breath.

Dick Guy: Holy shit! I’m so sorry. That was supposed to go to my buddy.

Me: Do you normally send dick GIFs to your friends?

Dick Guy: When they’re being dicks themselves? Yeah.

I laughed and shifted to the couch, snuggling into the corner to curl up with my phone and avoid the cookbooks stacked at the other end. Much better than unpacking.

Me: But only GIFs? Don’t guys always compare their manhood?

Dick Guy: Compare my manhood to a GIF?

Me: Well, I highly doubt your dick is going to get up and walk down the street.

Dick Guy: This has to be the strangest random conversation I’ve ever stumbled into, but my guy can hold his own.

I bit my lip. I had no idea why I baited this stranger; blame the insomnia or the total lack of anything intriguing going on in my life. This conversation with a stranger was much better than having people constantly check on me, expecting me still to be dressed all in black.

Dick Guy: Are you asking for the real thing?

I squirmed into the couch, body waking up from a long-dormant slumber. This wasn’t me. I wasn’t this person. But this guy had no clue who or where I was, and I kinda liked that anonymous fun.

I had no clue who had taken over my texting thumbs, but she was a hell of a lot more bold than regular me.

Dick Guy: I’m not going to find this splattered all over the internet with comments about how the GIF was better?

Me: Is the GIF better?

Dick Guy: You tell me.

An image started to download on my phone, and I squealed and turned it over. Holy crap. He really sent it. I mean, it could have been another GIF, but even if it wasn’t, I asked for it. Not so unsolicited now.

My cheeks heated. It had been so long, since Erik passed away. Before, if I wanted to be honest, Erik wouldn’t have sent exposed private parts over the phone, ease of being hacked and all that. But Erik wasn’t here, not anymore. I was here. Alone.

I turned over my phone. Not a GIF. Not a bad-looking penis, either. Subdued, but I wondered what it would take to get it to a livelier state. Somehow, and I’d blame the late night in a heartbeat, it turned me on. I wanted to see him hard.

But I wasn’t about to let this sender know that.

Me: Are you looking for a rating? I can rate you, but I’m not so sure you’ll approve.

Dick Guy: I thought we were comparing it to the GIF?

Me: Less cartoony, so there’s a plus. But it’s not going to walk across the room, is it?

Dick Guy: You have me laughing at my own dick. Thanks.

Me: Then my job here is done. If it makes you feel any better, breasts can’t walk across the room either.

Dick Guy: You sure about that?

Me: I’d like to see you prove me wrong.

My phone was silent, and I began to ponder how the hell I had ended up in this odd conversation, when it chimed again.

Dick Guy: Okay, no walking, just a lot of bouncing.

Me: They do bounce. That’s nature.

A GIF loaded, a cartoon character raising her shirt, bare breasts bouncing down, and my core clenched. It wasn’t goofy like that original GIF, and it made me want to be the one raising my shirt.

Dammit, he threw my words back at me. And they tempted. Something about the late night, the restlessness, the lack of easily meeting new people caused me to be bold. I raised my shirt and took a picture of one breast. The flash distorted the image, making it grainy and less real, which was the only reason I sent it.

And promptly had a mini panic attack. I sent a picture of my breast to an absolute stranger. This guy could work with my father for all I knew or be a teenager. Before the panic could explode in my veins, my phone chirped.

Dick Guy: Nice. Not bouncing and yet my night is now complete. This mistake might be the best one in my entire life.

Me: Because I sent you a pic of a breast?

I shuddered and pressed my thighs together, finding it nearly impossible that random texting guy managed to turn me on. I wondered if his dick was no longer limp and nearly asked for another view.

Me: Just think, I’ve got two of those.

Dick Guy: Believe me, I am.

Another shudder shocked through me, nerve endings sparking to life without a single touch. I missed this. This feeling, the excitement. This should have been creepy. Stalker going to break into the house creepy. But I felt the false sense of safety from interacting with a stranger. The thrill of it, and thrills had been seriously lacking in my life up until now. My focus for the last two years rarely strayed from my dreams—this move one giant leap closer. Though I couldn’t think of those plans, not now.

I wanted to know if he was hard.

Dick Guy: Thank you for turning my night around.

Dick Guy: Careful, I might take you up on that.

I put my phone on my heart and breathed in deep. A silly smile had to be on my face, but no one would see it. No one I knew lived nearby. The sobering thought knocked the last energy from my system. I picked myself up and stepped over random boxes, making it to the bedroom. Somehow, I fell asleep, wondering what that lickable dick looked like at full mast.

Wrong Number is currently available in digital format only: 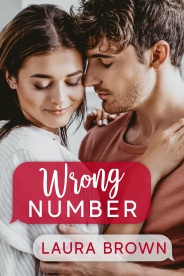 Did you know that Wrong Number and many titles are available digitally from Tule's own bookstore? Check it out!