Kaz Delaney stopped by the Tule blog to discuss the third book in the Hart of Texas Murder Mysteries series, Candy-Coated Conspiracy! 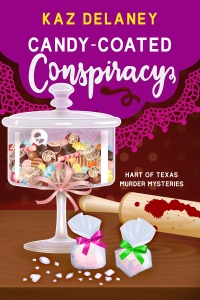 Where did you get the inspiration for Candy-Coated Conspiracy?

Initial inspiration came from two things. The first was location – well, specific location. It was always going to be set in a small town, as all the Hart of Texas Mysteries are, but I’ve always loved covers that featured candy stores – they’re so pretty – and real ones smell so good, so I knew one day I’d write about a mystery linked to a candy store. And secondly, I was drawn to a trope I’ve played around with a few times now and absolutely love, and that’s when someone is not who they’re pretending to be. I adore secret identity stories and once I’d hooked these two up, I had to work to find the story behind.

The hardest part was discovering what dastardly secret the town was hiding. I mean, how can a whole town keep something secret? My husband always says that the moment you tell one person—no matter how trusted they are—your secret is no longer a secret, so I knew if a whole town was keeping it secret it had to be big. And bad… 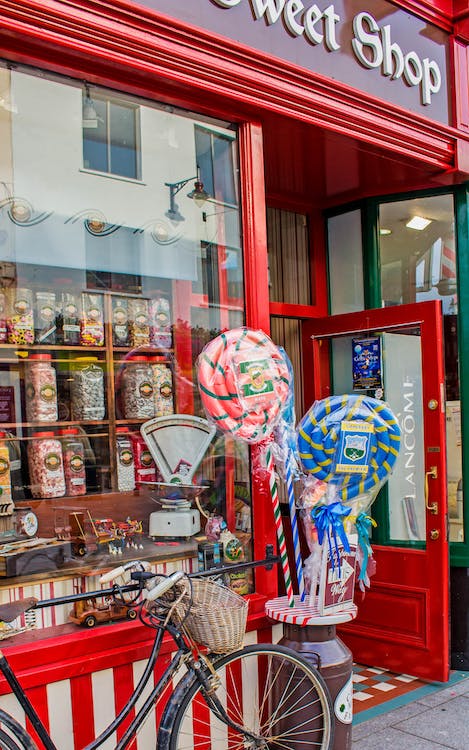 If you went to The Sweet Treat candy store featured in Candy-Coated Conspiracy, what candies would you be leaving with?

I’d probably need a truck to get me home with my load, but anything with nuts and caramel, preferably hard caramel. I’d love to try the sisters’ eggnog caramels and their marshmallow fudge. Um, oh yes! Tropical creams… They’d be delicious with their rich pineapple filling.  And I probably couldn’t leave without some Rocky Road.

If you could spend the day with your heroine, Rosie Hart, what would you two get up to?

It’s a no brainer that we’d first bake. It’s a passion we both share and I can imagine the hours whiling away as we baked and chatted. She’s way more talented than I am so I’d be also watching and learning. I know her home almost as well as I know my own, but I’d still love to walk through those rooms, and chat with Rosie and Fiona about the color palette they chose.

Then we’d have to go into town so she could introduce me around. First stop would have to be to see the Fab Four out at the retirement village—those gorgeous, yet scandalous, rascally and irreverent nonagenarians—ensuring we didn’t come between them and a meal or food break; nor distract them from cheating their way through yet another hand of Texas Holdem’.  We’d drop in on Miz Brenda and pick up some of her amazing preserves, say hi to Janet while we popped in to meet Sheriff Frank Kinnead, who, like Rosie, I see as a father-figure. Naturally I’d have to go to that iconic newspaper office to see Midge and inhale all the history held within those walls. We’d meet the other townspeople, and then hopefully have dinner with Jonah and his family, Fiona and Clay.

Although, if she was embroiled in a mystery, we’d have that famous whiteboard out and we’d be brainstorming while I helped her solve whatever needed solving. How much fun would that be!!

I’d probably roll home after having consumed too many sweet treats, and be wishing I could do it all again the next day.

Oh gosh, this is a tricky one and I’ve really struggled for an answer—and also one that’s relatively short enough to be a snippet. Any scene with the Fab Four from Riverside Retirement Village is usually a hoot to write, and always so much fun. Then there are some really poignant scenes that still make me cry no matter how often I’ve read them—a final scene between Katya and Lester Jackson is beautiful; the scene with 103 year old Rita Wiley-Hannaford as she recounts her lost love story is as inspiring as it is sad as it offers up answers to this mystery. Speaking of the mystery, I liked the scene with Dwayne Morris’ sister where she explains to Midge and Rosie why her brother may have been not only pretending to be someone else, but why he was tearing up the house of his supposed elderly aunts. Here’s a teeny bit of it.

The set up is that Gabrielle, Dwayne’s sister, has been recounting a story passed from her grandparents; a story that had obsessed a young Dwayne from a young boy. It’s about a letter given to her grandfather’s cellmate that through misfortune never reached its destination – the cellmate’s family. The uncle of the two elderly women suspected of Dwayne’s murder.

“But why take so long?” Midge pondered. “He’d known this story all his life.”

“Mom had an idea about that as well. Obviously, the letter had been passed down and when my grandparents passed away it was in their papers. Mom had them, intending to go through them. The last time Evan was at her house, my mom was sorting those papers. She came across the letter, but later that evening after he’d left, the letter was gone.” Gabrielle was looking very tired now. “She said she’s been praying he wouldn’t do something stupid. But I guess it was too late. He did.”

For long moments we all sat in silence, I guess all pondering that statement. Well, I’m assuming they were. My thoughts were very personal and becoming more urgent.  I’d been hanging on to go the bathroom for a while, not wanting to miss a moment but we seemed to be at a break point—an impasse of sorts, and as the situation was becoming grave, I asked for directions and excused myself. I always say I get my best creative ideas in the shower or bath so I guess it was no surprise that even releasing water raised another question we needed to ask.

Back out with the others, Gabrielle was rinsing cups in the kitchen sink, and Midge had our bags, ready to leave as soon as I’d made my return. But I couldn’t go just yet. Just one more question. Maybe two…

“Gabrielle, did you ever see the letter? Read it with your own eyes?”

When she shook her head, my heart sank. But I still had one more. “So, do you have any idea why your great-grandmother thought the whole thing was fictitious? Vivid imagination?”

At that, she smiled. It was wan and half-hearted, but it was a smile. “That I do know and I agreed with her.” She shook her head “Oh, come on… Diamonds hidden in a wall? And he hadn’t told anyone? The man was a pauper and he had diamonds supposedly hidden in a wall? Crazy!”

And there it was…

My breath stalled at the mention of that word. Diamonds.

Don’t ask me how I knew, I just did. It was a gut thing. But it was significant.

And unlike Gabrielle’s great-grandmother, I believed the story.

I’m reading a novel entitled Everyone in my Family has Killed Someone by Benjamin Stevenson. It’s a spoof on mystery novels, with its own mystery of course. Snow isn’t something that’s immediately associated with Australia but we do have a couple of snowfield areas in the mountains down south and this is the setting for this novel which plays into the locked room scenario as they’re cut off from the rest of the world by heavy falls.  Given that I’m reading it in one of our coldest winters in a hundred years, I’ll be looking for a warmer setting for the next book I choose. I have just the titles in mind on my TBR (To be Read) pile.  Six Days of Spring by Charlee James next on my Kindle list and I’m looking forward to that, but I’m also so keen to start on Tule’s Outback Babies series. It features some of my favorite people – and authors: Barb Hannay, Trish Morey, Fiona McArthur and Kelly Hunter – and I think it will be huge fun. And besides, I’m such a pushover for babies and little people. When I’m not indulging myself and want to pretend I’m working instead, I want to re-read The Newsletter Ninja by Tammi Labrecque 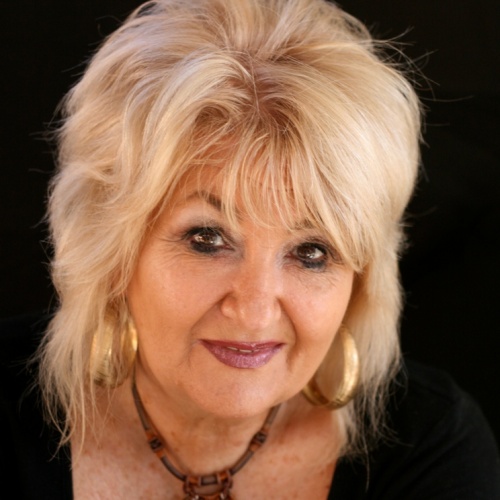 Award winning YA & children’s author, Kaz Delaney, and her alter ego, have currently sold 73 titles between them over a 26 year career.

Her books have won many awards, among them the prestigious Aurealis Award for best paranormal and ARRA (Australian Romance Readers Association) awards. Her novel ‘Dead, Actually’ (Allen & Unwin) was nominated for a Davitt Award, (Best crime novel, Sisters In Crime) in the YA section.   Dividing her time between teaching and writing, Kaz formerly tutored Creative Writing for CSU’s Enrichment Program as well as teaching and creating courses for the Australian College of Journalism.

Having always had a love of cozy mysteries, Kaz is having so much fun writing her Hart of Texas Mystery Series for TULE Publishing, that she worries it’s not legal!

With their family grown and gone, Kaz lives with her wonderful husband at beautiful Lake Macquarie, Australia, a place she describes as a strip of land between the ocean and lake.  Like Rosie, Kaz loves to bake and grow vegetables and unlike Rosie, manages to make a mess of every crochet task she undertakes.