Katherine Cowley stopped by the Tule blog to discuss the third book in The Secret Life of Mary Bennet series, The Lady’s Guide to Death and Deception! 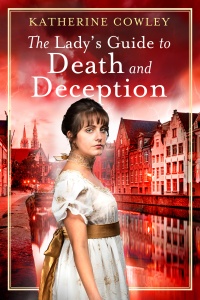 Where did you get the inspiration for The Lady’s Guide to Death and Deception?

In 2014 I read the book Vanity Fair by William Makepeace Thackeray. The book is dense and took me a long time to read—at least six months—but I ended up really enjoying it. What I didn’t realize before reading Vanity Fair was that tons of women, of all classes of society, went with the British troops to Brussels before the Battle of Waterloo. While some of the women stayed in Brussels during the fighting, others accompanied the men to the battlefield.

This kernel of information stuck in my mind and became the inspiration for the novel. I wanted Mary Bennet to go to Brussels and participate in the events that led to the downfall of Napoleon Bonaparte, while solving a murder mystery.

How has Mary changed throughout the course of The Secret Life of Mary Bennet series?

By the third book, Mary is more confident in herself and her abilities. She’s also more able to keep going, even in the face of struggle, adversity, and heartbreak.

At the beginning of the first novel, she doesn’t have true friendships or strong relationships. By the third novel, she has developed meaningful friendships with family members and others. These friendships have become an important part of Mary’s life and have changed the way she views the world around her.

Mary has a budding romance with Mr. Withrow in this third installment. How did you balance the moments of romance within this mystery novel?

The first thing I did was choose a few key scenes that would focus almost entirely on the romance. One is near the end of the very first chapter, when the spies are doing kissing practice, so they can use physical affection in the field as a tool to discover information. Another is later on in the book when Mary and Mr. Withrow are learning the Viennese Waltz. And of course, there is a very essential scene at the end of the book. These key scenes gave me a chance to really explore the romance and create shifts in their relationship.

In the rest of the novel, I included bits and pieces of romance and relationship development while Mary and Mr. Withrow solve the murder mystery. Working together as partners created many opportunities to include a few lines of banter or create some tension between them. They sit in the carriage a little closer than normal; Mr. Withrow’s hand brushes Mary’s skin as he helps her with a disguise; they disagree about the best way to get information from a suspect and must later apologize.

Many of my favorite novels have a romantic subplot, where the characters build their relationship while having an adventure or solving the mystery, and I loved getting to write this sort of subplot in my novel. Every single investigation scene becomes more interesting when it’s also impacting a romance. 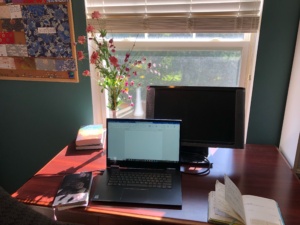 I set aside time from 1-3 p.m. every day to work on this book. This was quiet time for my youngest daughter, and it didn’t matter what other life commitments or responsibilities I had pressing on me, this time was devoted to writing the novel.

I do most of my writing in my office. My desk is next to the back window of my house, and from it I can see a small patch of forest that has birds and squirrels and rabbits.

I just finished reading Naomi Hirahara’s Clark and Division, an excellent murder mystery that also explores what life was like for Japanese Americans during World War II. I also recently read Richard Osman’s The Thursday Murder Club, which is a delightful, humorous story about a group of retirees who take it upon themselves to solve a murder.

My giant to read pile is calling my name, and I’m still choosing what book I’m going to read next! 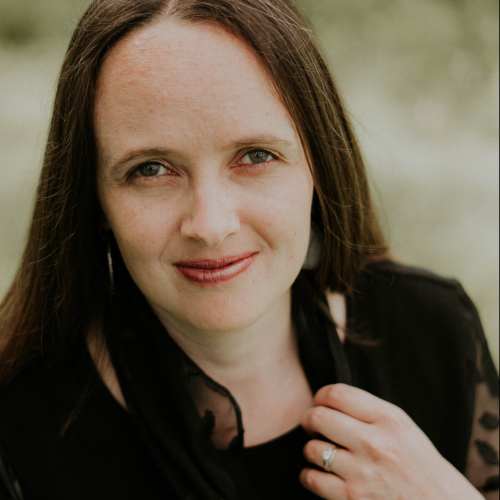 Katherine Cowley’s debut novel, The Secret Life of Miss Mary Bennet, was nominated for the Mary Higgins Clark Award. Her Mary Bennet spy series continues with the novels The True Confessions of a London Spy and The Lady’s Guide to Death and Deception.

Katherine loves history, chocolate, traveling, and playing the piano, and she has taught writing classes at Western Michigan University. She lives in Kalamazoo, Michigan, with her husband and three daughters.