Pam Crooks stopped by the Tule blog to discuss the third book in her Blackstone Ranch series, My Kind of Cowboy! 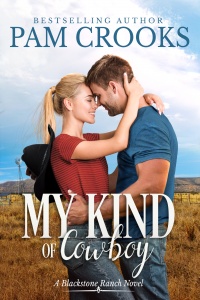 Where did you get the inspiration for My Kind of Cowboy?

I was inspired by Shandi who appears in the first chapter of the first book in the series, A COWBOY AND A PROMISE. She was the sympathetic cashier in the gas mart who refused payment for bottled water after Ava’s purse was stolen. I also planted the seed of her attraction for Jace later in the book when she’s a waitress and serves Ava and Beau at the Greasy Bull bar and grill. Ava picked up on that attraction, makes mention of it, and any savvy reader would suspect one day Shandi and Jace would have their own story.

How is Jace different from his brothers, Beau and Brock? How is he the same?

Jace is the oldest of the Paxton brothers, and he knows full well that one day, ramrodding the Blackstone Ranch would be his responsibility. He’s intent on diversifying the cattle herd. He provides a modern perspective for his father. His brothers know he’s next in line when their father can no longer run the ranch. They respect him for it.

But he’s the same in that he’s determined to keep the Paxton legacy alive.  He’ll never live anywhere else but right there on the ranch, outside of the small town named after his family.  Without the Blackstone, there is no Paxton legacy.  He’s as fiercely determined to protect it as his brothers are.

This is the third book in your Blackstone Ranch series. Do you find it harder to write the first book or the subsequent books in a series?

Writing the last book, MY KIND OF COWBOY, was also great fun and immensely satisfying since I could give not only Jace and Shandi their happy ending, but I could wrap up loose ends into one pretty package.  By the time I got to this book, I knew the characters inside and out.

So it was the middle book, HER TEXAS COWBOY, that I found the most difficult.  The story is loosely based on a true crime which was harder to plot, and since Ava in the first book was from New York just like Lucienne was, their backgrounds were similar.  Ditto with Beau and Brock being twins.  I was constantly cognizant of needing to make them as different as I could while keeping the story lines different, too.

My Kind of Cowboy is a contemporary western, but you also write historicals. What is different about writing contemporaries vs historicals? Which one do you enjoy more?

Yes, most of my books are historical romances, mostly westerns.  I got started with Leisure Books back in 2000, but I cut my eye teeth with Harlequin Historical for much of my backlist, so I already had a good feel for the Old West era.  Tons of research books, too.  I never got tired of writing cowboys in that era.  But of course, with any era, I had to be constantly on the watch for historical accuracy.

Writing a contemporary was so much faster and easier!  The dialogue, both internal and external, was a snap, and Pinterest provided plenty of easy-to-find inspiration.  Still, I depended on my sister Tule author, Jeannie Watt, to help me with modern day ranch stuff since she lives on a ranch.  She was awesome to brainstorm with and so generous with her knowledge.  Jeannie has also been with me at Petticoats & Pistols – www.petticoatsandpistols.com – for many years, so asking for her help was pretty much a no-brainer.

What do you want readers to take away after reading this story?

That family is everything.  So is one’s heritage.  Loyalty and love of country and each other makes for a happy life and one worth defending against any odds.

I’m reading COLD HORIZON by Kristy McCaffrey.  I first ‘met’ Kristy in a multi-author historical romance series we did together, and she’s such a sweetheart.  COLD HORIZON is a contemporary romance featuring mountain-climbers, and since I’ve never read any of Kristy’s contemporary work before, I was quick to dive in. Gosh, her research is impeccable.  A fascinating read! 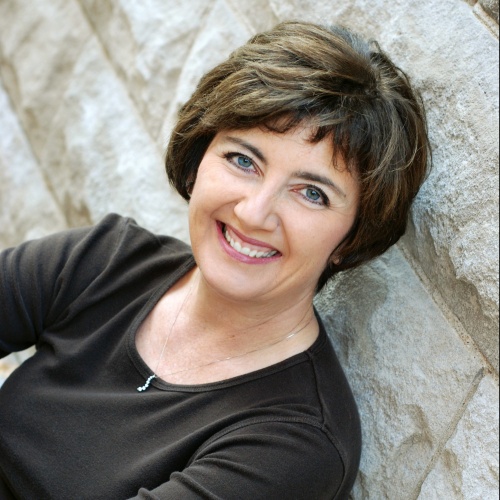 While expecting her first child (more years back than she cares to count), Pam Crooks read her very first romance novel, and she’s been in love with them ever since. She grew up in the ranch country of western Nebraska, and it was inevitable she’d eventually write lots of books about cowboys.   Pam still lives in Nebraska with her husband (who is not a cowboy), four married daughters and nine perfect grandchildren.

She’s a long-time member of RWA and RAH, her local chapter. Pam is also one of the founders of Petticoats & Pistols, a popular blogsite for western romance.  She loves to cook, hang out at her lake cabin, and decorate birthday cakes for anyone who will let her.

Visit www.pamcrooks.com for all of Pam’s books.