Rebecca Crowley stopped by the Tule blog to discuss the third book in the Orchard Hill series, Coming Home to You! 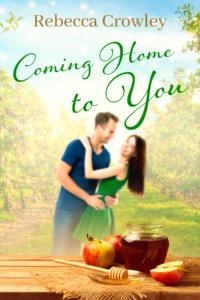 Where did you get the inspiration for Coming Home to You?

Each of the Orchard Hill books centers around Jewish holidays, and Coming Home to You features Rosh Hashanah, the Jewish New Year, and Yom Kippur, a day of fasting and atonement. This period in the Jewish calendar is about self-reflection, forgiveness, and starting over, which felt like the perfect setting for a second-chance romance.

If you could spend the day with Mabel or Sam, who would you choose and what would you do?

This is a tough one! As much as I would love to sit with Sam and hear his stories about working in an international refugee agency—plus he’s easy on the eyes—I’d have to go with Mabel. She’s fun and upbeat and hilarious, and I would love to spend a day watching her be an awesome midwife (although I may draw the line at attending an actual birth!) before heading out for nachos and margaritas.

This is a charming second chance romance. What drew you to this trope? What’s your favorite trope to write?

I like second-chance romances because they give the characters a pre-existing history to draw from, so it feels like they can go deeper faster, skipping over the getting-to-know-you part. At the same time second-chance romances are challenging, because there’s a reason they’re not together already, and it’s rarely good. Getting past that hurdle is difficult and complicated, but the relationship that emerges on the other side is so much stronger for being battle-tested.

My favorite trope to write is definitely professional rivals! I haven’t written a ton – Two Nights to Forever and Off the Record are recent examples – but it’s so fun to thrust two ambitious characters together and watch them butt heads.

What song would be in the soundtrack to Mabel and Sam’s love story?

Something in the Orange by Zach Bryan definitely captures the push-pull of their relationship, and that hard point of being so hurt by someone yet so lost without them.

I’m almost embarrassed to admit that I just read my first-ever Laura Kinsale book and I’m hooked! I’m looking forward to working my way through her backlist over the next few months. 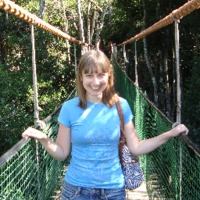 Rebecca Crowley inherited her love of romance from her mom, who taught her to at least partially judge a book by the steaminess of its cover. She writes contemporary
romance with smart heroines and swoon-worthy heroes, and never tires of the happily-ever-after. Having pulled up her Kansas roots to live in New York City, London and Johannesburg, Rebecca currently resides in Houston.