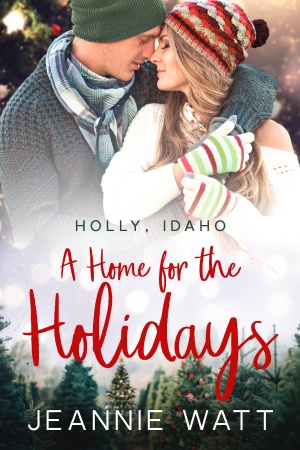 A Home for the Holidays

Can she show this engineer how to build a home?

Jason Regan is a man on the go. Excluding his high school years in Holly, Idaho, he’s never settled in one place. Building his engineering company requires a lot of travel, so when he returns to Holly to visit his aunt and pay a decade-old parking ticket, he’s not planning to stay for Christmas. The judge’s ruling changes that—he’s assigned community service at an animal shelter requiring his skills.

Former lawyer Tess Evans moved home to pursue her true calling—managing the Forever Home Animal Shelter. The shelter is chronically underfunded and understaffed. So, to raise money and awareness, she organizes a ‘Home for the Holidays’ adoption event at Holly’s Christmas festival. Getting a skilled volunteer at such a critical time is a gift and Tess takes full advantage. Their to-do list is long, and not falling in love is number one.

As their attraction grows, they keep forgetting Jason’s stay in Holly is temporary. Can Tess, a lonely terrier named Neville and some Christmas magic change his mind?

Jason Regan checked his watch as he waited for his case to be called. After his fine was set and he was excused from the courtroom, he’d call his business partner, Dylan Crane, to get an update on where they were on their active projects. Hopefully, there’d be no fires to put out and he’d be free to spend the evening with his aunt, helping her with her Christmas decorations before diving into unanswered emails. Tomorrow morning he’d be on a plane back to the Bay Area.

The courtroom was nearly empty. Apparently, there hadn’t been a crime wave in Holly, Idaho, since he’d last been there, which, according to Aunt Mae, was too long ago. He’d meant to visit, he really had. Some of his best memories were of this small town, the place where he’d lived the longest while attending high school. But they were just that. Memories. Maybe it was hardwired in him, as it seemed to be hardwired into his parents—he wasn’t one to stay in a place for too long.

His was the last case of the day, but he’d arrived twenty minutes early just in case the judge hurried things along. Edna Maliki, whose daughter Jason had gone to high school with, was the next person called to stand before Judge Nelson. After listening to her explain how she shouldn’t have been given a ticket because the red paint on the curb where she’d been parked was so flaked and worn that it was impossible to tell that it should have been red, Jason glanced at his watch again.

Jason’s head snapped up as he realized Judge Nelson was speaking to him. He nodded, not certain whether he should speak. Or smile.

Judge Nelson turned his attention back to Edna, who was showing him a photo on her phone and the judge nodded his head. “I see your point. But Edna, how many years have you lived here? And how long has that been a no-parking zone?”

“Judge, I just started driving again. My youngest just left home, and I finally have a car to use.”

The few people in the courtroom chuckled and even the judge gave a smile.

“It looks like I need to call municipal and get this curb painted.” He smiled and lowered his gavel, giving it a solemn tap. “Case dismissed.”

Edna beamed and it looked like she was going to rush the bench to hug the judge, but the uniformed bailiff gently steered her toward the aisle. She waved over her shoulder.

“Next case. Jason L. Regan,” the bailiff intoned with a great deal more seriousness than Jason thought the case justified. There’d been a mix-up in the mail. End of story.

“Good morning, Jason,” the judge began pleasantly. “Nice to see you back in Holly. It’s been a spell.”

For some reason the judge’s words, followed by the look he gave over the top of his glasses, made something twist in Jason’s midsection. Small town judge. A friend of the family. Nothing to worry about. But that didn’t stop him from feeling like he was fifteen and facing an angry principal like he had the time somebody had set off stink bombs in the bathroom and ducked out as Jason pushed open the door. Smoke had rolled out over him, and even though he, too, had run, he smelled of stink bomb and several witnesses had put him at the scene. A classic case of being in the wrong place at the wrong time.

“Yes,” he said politely. “Business has kept me busy.” He was the troubleshooter for Regan-Crane, a three-person engineering firm. The guy who flew around the country, drumming up contracts, putting out fires, representing the company. He was literally on the go for most of the year, and he loved it.

The judge nodded and continued to stare at the papers in front of him. Just as Jason was about to shift his weight, he raised his gaze. “This ticket is almost a decade old.”

“Yes. You see I mailed a check and assumed it was a done deal.”

The judge nodded. “Do you balance your checkbook?”

Jason gave a slight shrug. “I actually tend to follow the balance online. I’m aware of my major purchases and keep a healthy cushion.”

“And online. I check daily.”

“But you never noticed that this check didn’t clear.”

“No.” Short answers were best, he decided. The kindly judge was looking remarkably serious.

“This fine probably didn’t mean much to your bottom line, but the city of Holly could have used that money. Why…we could have made sure that all the no-parking zones were painted a nice bold red, so that people like Edna would be aware of where they could and could not park.”

Jason refrained from pointing out that had they done that, the paint would be long gone by now. The judge made a valid point. He should have been more vigilant with his checking account. Life had been crazy just after college when he and Dylan started their engineering firm. It was still crazy, but in a more manageable way.

“It was an oversight, I agree. And I’m happy to pay an additional fine. And interest,” he added.

“Interest is part of the deal regardless. As is the possibility of an additional fine.” The judge gave a solemn nod, then leaned back in his chair, tapping his cheek with his pen. He looked at the bailiff, then at the nearly empty gallery.

“I understand,” Jason said solemnly. And he was more than willing to pay. Then he’d finish helping Aunt Mae decorate her house—she’d purchased new icicle lights for the eaves—and take her out to dinner. If they had time, maybe they could even dig out the old Monopoly board.

When he’d lived with her while attending high school, they’d spent a lot of time playing board games and talking about life. Mae didn’t have the same travel bug as her brother; in fact, she was the polar opposite of Jason’s father in that regard—but she loved hearing about Jason’s adventures growing up on various archaeological digs.

Judge Nelson put the pen back on his desk and then leaned forward, resting his arms on the bench in front of him. “Jason, I’ve thought long and hard about this.”

Jason’s stomach tightened. He’d been in front of the bench for approximately two minutes, so there’d been no time for long, hard thinking, which meant that the judge had thought this over before Jason stood before him. A nasty sense of foreboding crept over him.

“You were negligent in your personal responsibilities.”

That was true, and it stung, because Jason always went into everything with a hundred percent commitment. Except for making certain that this ticket had been paid.

“It would be easy for you to pull out your pocketbook and make this go away, but sometimes easy isn’t the answer.”

“It isn’t?” The words escaped his lips before he was conscious of muttering them.

“No. I see too many people throwing money at a problem so that they can continue as they were with no more than a financial blip. And because of that, I don’t believe people are thinking enough about where they’ve gone off track.”

“With all due respect, Your Honor, my check was lost in the mail.”

“And you never followed through.”

Jason swallowed as the ominous feeling grew. “In this particular instance, no.”

“You were too busy.”

“That isn’t an excuse,” Jason replied, knowing he’d better be saying what the judge wanted to hear or…he didn’t know what, but he could honestly say he didn’t like the way the judge was studying him.

“Sometimes we get tunnel vision and sometimes, for our own good, we need to have someone help us find a wider view.”

Jason blinked at the judge. This was a parking ticket for Pete’s sake.

Jason cleared his throat. “I’m flying to Mexico on business.”

“Are there other people in your company who can handle the matter?”

“Well”—Jason felt like tugging at his collar, but instead straightened his shoulders—“I have a partner.” Dylan was the guy who kept everything running smoothly in their main office. He rarely traveled.

“Could your partner handle this matter in Mexico? Or could it be done via the wonder of telecommunications?”

The rock in Jason’s stomach doubled in size. Was he going to be thrown into jail? “He…” Jason’s voice trailed off as he envisioned Dylan’s reaction to having to do both of their jobs over the holidays, a time they always took advantage of to get a leg up on the competition.

“Can. He. Handle. Matters?” the judge repeated.

“That’s good, because I am sentencing you to one hundred hours of community service, ten hours for each year the ticket was not paid—to be served between now and December 24.”

“What?” Jason’s reply echoed through the gallery, causing the judge to pick up his gavel with a scowling expression. “I apologize,” he said quickly. He knew what was coming. He would no doubt spend seven days painting curbs red so that Edna Maliki would know where to park.

“Jason Regan, I hereby sentence you to serve one hundred hours at Forever Home Animal Shelter. They need help, and you, sir, need to focus on something other than your next big deal or your love of world travel.” He lowered the gavel with a soft tap that seemed to mock the severity of the sentence he’d just imposed and gave Jason a dark smile. “Next case!”

A Home for the Holidays is currently available in digital format only: 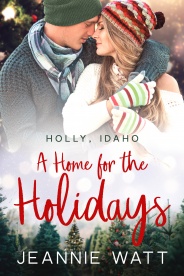 Did you know that A Home for the Holidays and many titles are available digitally from Tule's own bookstore? Check it out!