Deputy U.S Marshal Logan McCall never expected his first bullet wound to come from a young widow with pretty blue eyes. Nor did he expect to nurse his injury while working furtively on a ranch. Now, instead of chasing the notorious band of outlaws he’s been hunting, he commits to proving the woman’s neighbor is trying to drive her off her land.

Paige Kelly is only trying to protect what’s hers when she shoots the tall, handsome lawman by mistake. She fears she’ll be arrested, but instead gains an ally. Working together during the day leads to passion at night. Soon, Paige is dreaming of a very different life, but first, she must convince the marshal to turn in his badge and stay with her.

A desperate act from Logan’s boyhood changed the course of his life and his demons still whisper that he isn’t worthy of the things Paige is offering. But as they realize there is more than one villain hiding in plain sight, Logan can no longer deny what’s in his heart. Suddenly a lifetime of putting the law first pales to keeping Paige safe… But has his realization come too late?

Paige Kelly pushed open the door to the sheriff’s office, narrowing her eyes when it groaned in protest. Sheriff Grady looked after his office as devotedly as he did the complaints of the people he was sworn to protect.

As this wasn’t her first visit to the sheriff or sure to be her last, all considering, she didn’t bother with formalities. She snapped the door closed behind her and marched to his desk. The hem of her skirt stirred the layer of dirt he hadn’t bothered to sweep. But even the rising cloud of dust couldn’t hide the dip of his head and the roll of his eyes before he lifted his gaze to hers.

“It will be,” she answered, setting her handbag on his desk, “when you tell me you’ve finally done something about my dead steers.”

“Now, Mrs. Kelly,” he began in a condescending tone that set her teeth on edge, “you know there’s nothing I can do about that.”

Paige crossed her arms. It was that or slap the false, overly bright smile she’d come to loathe.

“I told you who is responsible.”

“No. You told me who you think is responsible. Unless you have more proof now than the last times you’ve come, then I’m afraid you’ve wasted your time.”

“John Barton is the only one who stands to gain. He wants my land and the easier access to the river.”

The sheriff let out a long sigh. “John Barton’s ranch was there long before you and your husband bought the land next to it.”

“Yes, and before we owned it, Myles Greentree did. And he suffered similar losses.”

“Which, as I’ve stated before, is purely a coincidence.”

Paige threw up her hands. “A coincidence would be everyone in the area being affected. But when only my animals, and Mr. Greentree’s before me, are coming up dead, I’d say it’s more than a coincidence. It’s a personal attack.”

He didn’t bother hiding his eye roll this time.

“John Barton is after my land, just as he was after Greentree’s, and he’s using the same means to push me off.”

The sheriff ran a hand down his face. “By killing off your cattle one by one until you can’t afford to stay there any longer? At which point he’ll sweep in and buy it?” He shook his head. “Honestly, Mrs. Kelly, don’t you think Barton has other things to do with his time?”

“I do indeed. Which is why he’s paying one or more of his hired hands to do it for him.”

The sheriff’s doughy cheeks jiggled as he laughed. “So now he’s paying his hands to do you harm? Your stories and accusations get longer and more ridiculous each time we talk.”

Fury sizzled through her veins and along her skin. Her face burned with it. “It’s not a story. It’s the truth. And the only reason Barton doesn’t already have my land is because Greentree advertised the sale of it in other cities and newspapers rather than here. The last thing he wanted was for Barton to get his land and he didn’t trust anyone here not to tell him it was for sale.”

“Even if that were true, wouldn’t it just be easier for Barton to get rid of all the animals at once, rather than drag it out this long, over two owners?”

“If he did then there’d be no question, would there? It would be obvious I was being run off. It would be clear there was nothing coincidental about what’s happening to my ranch. And you wouldn’t be able to turn a blind eye from an entire herd being killed.”

Some of the light dimmed from Sheriff Grady’s dark eyes. “I’d tread carefully, Mrs. Kelly. This isn’t the first time you’ve accused me of being untrustworthy.”

He shrugged. “As I am with many other folks. Nobody else has a problem with John Barton. And the fact that Greentree didn’t tell you he was even having issues with the ranch until after you’d signed the papers should tell you who really isn’t trustworthy.”

Paige narrowed her eyes. She’d explained all this before, many times in fact.

“He didn’t say anything before because he knew it might affect our decision to buy the land.”

It wasn’t until after the sale was done and the papers had been signed that Myles Greentree divulged the problems he’d been having. He’d suffered many broken fences and near a dozen dead steers. While she and Alex had been concerned about what they’d gotten into, by then they’d fallen in love with the small ranch and had been too excited to dwell on the negative. And, truth be told, they hadn’t wanted to believe it was as bad as Mr. Greentree had claimed.

It hadn’t taken long to realize the man hadn’t lied. Soon after they’d moved in, she and Alex were suffering the same fate. They’d confronted Barton but he’d denied everything and Sheriff Grady claimed there was nothing he could do without proof.

“Well, that’s unfortunate, Mrs. Kelly. But it doesn’t change anything. You can’t prove John has anything to do with your bad luck any more than Greentree could.”

“Bad luck?” Paige raged. Her heart pounded hard and fast in her chest. Her hands curled into tight fists. “My husband’s death was not back luck,” she ground through clenched teeth.

Sheriff Grady leaned back in his chair, clasped his hands over his rounding belly.

“I’m as sorry for your loss today as I was in November, but I don’t know what else you can say about a man who gets lost and freezes to death in a snowstorm other than bad luck.”

Paige slapped her hands on his desk, leaned forward. “I’d call it murder, Sheriff, same as I did in November.”

He looked from her hands to her face. “An unfortunate accident, though I can understand where you feel the need to lay blame.”

“That gash on the side of his head wasn’t an accident. Not with nothing nearby to justify it.”

“As I said, mishaps are known to happen.”

“I won’t let this go, Sheriff. A good man was killed and one way or another I’ll prove it was Barton. Just as I’ll prove he’s the one trying to run me off my land. And then you’ll have to do something.”

Paige grabbed her handbag and hooked it into the crook of her elbow. She pivoted, her back straight, chin raised, and marched forward. At the door she turned to the sheriff.

“I may only have two hired men but I’m always armed.” She tapped her handbag and the Colt she carried within in. “With all the ‘mishaps’ that have occurred around my ranch, I’m liable to shoot first and ask questions later.”

His gaze hardened. “Don’t you be taking the law into your own hands.”

She swung the squeaky door open and only a last grab onto her temper kept her from slamming it closed.

Sheriff Grady might like to pretend this was all coincidental but she knew better. It wasn’t denial or the need to lay blame that made her believe Alex had been murdered. Nothing about his death had made sense last winter and it still didn’t. It was clear to Paige that John Barton had hoped with Alex out of the way, he’d have an easier time getting her to sell.

Well, Barton had been wrong. If anything it fired her determination to stay. It wasn’t going to be easy but then the past ten months hadn’t been easy and she was still there. Still alive, still fighting.

Still, she was glad she’d run her errands first and saved her visit to the sheriff for last because she was in no mood to shop now. Waiting for a wagon and a trio of men on horseback to pass, Paige stepped onto the road. She’d left her own wagon across the street, down in front of the telegraph and post office.

Remembering the letter she’d picked up earlier brightened Paige’s mood. She hadn’t heard from Violet in over a week and couldn’t wait to read her friend’s latest news. Tonight, when the men had gone home, she’d settle before the fire with a cup of tea and read her letter. Imagining it, Paige smiled as she settled onto the seat of the wagon. Glancing over her shoulder before rolling onto the street, Paige saw Sheriff Grady standing in his doorway, arms crossed, his gaze locked onto her.

No doubt he’d be telling his friend Barton about her visit. Well, let him. Paige snapped the reins and the wagon lurched forward. She wanted it clear to both Barton and Grady she wasn’t backing down. She’d meant what she’d said about being armed and ready to shoot. She had been since Alex was killed.

When it came to her life, her livelihood, she didn’t take chances. But neither was she going to be run off.

Don’t take the law into her own hands, Grady had told her.

Well, someone had to.

A Marshal’s Promise is available in the following formats: 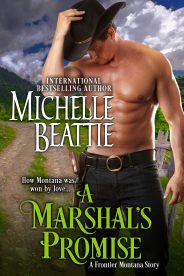 Did you know that A Marshal’s Promise and many titles are available digitally from Tule's own bookstore? Check it out!